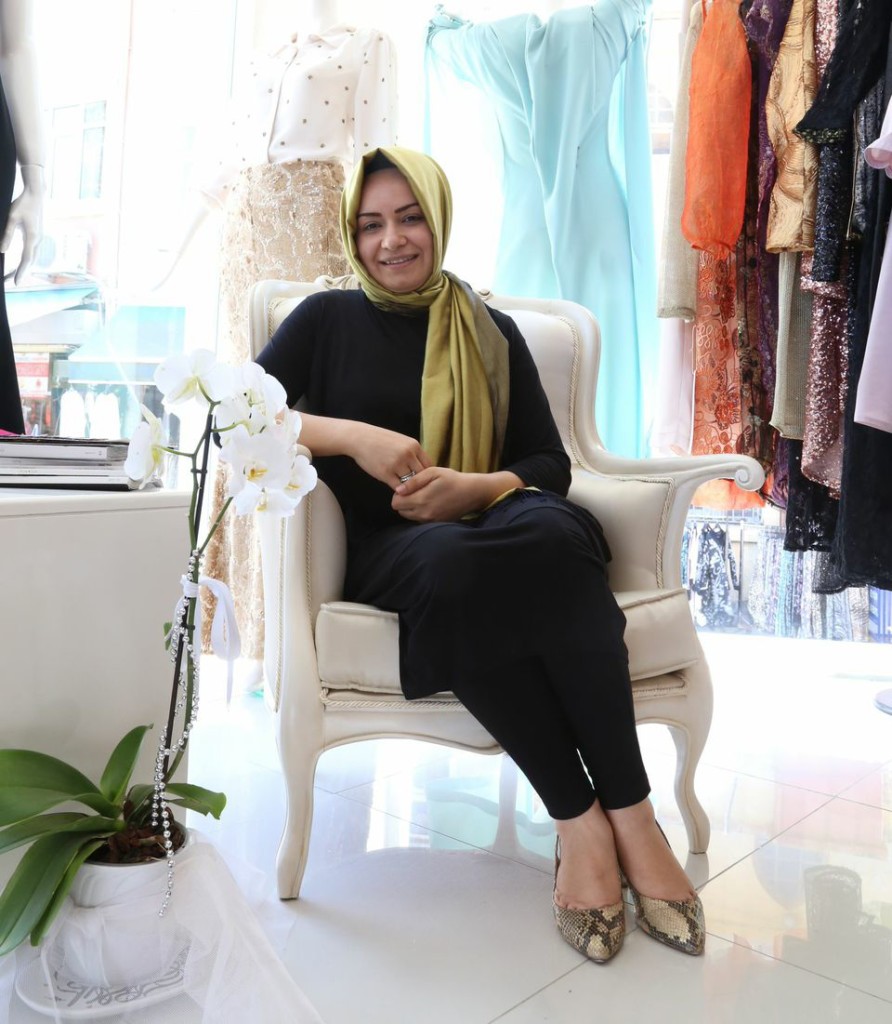 Boutique owner Gülcan Kaya sells most of her clothing over the Internet, but hopes to attract new customers in trendy, gentrifying Eyüp. Photo by Şaziye Gourley-Ozhayta

A conservative Muslim enclave grows in prominence and wealth

Once infamous as a district of malodour and filth, the conservative neighborhood of Eyüp has blossomed over the past 20 years, attracting both devout Muslim migrants from around Turkey and prosperous pilgrims from around the Middle East.

A stronghold of support for Prime Minister Recep Tayyip Erdoğan and his Justice and Development Party, AKP, Eyüp is also home to one of the holiest sites in Islam, the tomb and mosque of Eyüp Sultan, which has turned the neighborhood into a pilgrimage destination.

During Ramadan, Islam’s 40 days of daytime fasting and prayer, the neighborhood can be packed with as many as 300,000 people, Özkan said. They arrive to break the daily fast together, with a festive neighborhood iftar, or post-fast evening meal.

The ouster of smelly industry from the shores of the Golden Horn is one reason. Another is a large influx of working class migrants from the Turkish heartland.

“People have come to Eyüp from everywhere in the East,” said the neighborhood muhtar, or elected district leader, Izzet Özkan. He said that migrants in recent decades had often arrived with little money, and then prospered.

“Even within our district we have villages,” he said. “It has also become an international place.”

Eyüp’s claim to fame is linked to both Muslim and Turkish history. Legend has it that the Prophet Mohammad’s flag bearer and confidante Ayoub Ansari was killed here in battle, and buried along the shore. As Mehmet the Conqueror was taking Constantinople in 1453, this gravesite was miraculously “rediscovered” through an aide’s vision, spurring Mehmeton to conquer the city. Five years later, as sultan, Mehmet had the Eyup Sultan Mosque built on the site; Ottoman sultans were traditionally crowned in ceremonies here. Burial in Eyüp was a great honor, so all of the great figures of the Ottoman world wanted to be buried there. Today, many Muslim tourists come to visit these tombs.

Gülcan Kaya moved to Eyüp a year ago, and quickly established a high-end couture shop in a prominent spot on a main commercial street. The 36-year-old clothing entrepreneur said she had been looking for the right place in Eyüp to move her business, Lazaza, which mainly operates over the Internet.

One day as she left the mosque, she saw a “For Rent” sign in a shop in front of her.

“I went into the mosque and simply opened my hands to Allah,” she said. “At that moment, I felt a sigh of relief. As I exited the mosque, I saw that this place was for rent. I purchased it, opened it, and will never look back.”

“I believe in Eyüp’s religious importance, but do not think it gets the image that it deserves,” she said. “With the historical heritage of Eyüp, many people desire to come,” Kaya said. Kaya hopes that as her business grows, she will be able to move to a bigger location, and to serve a more diverse clientele. 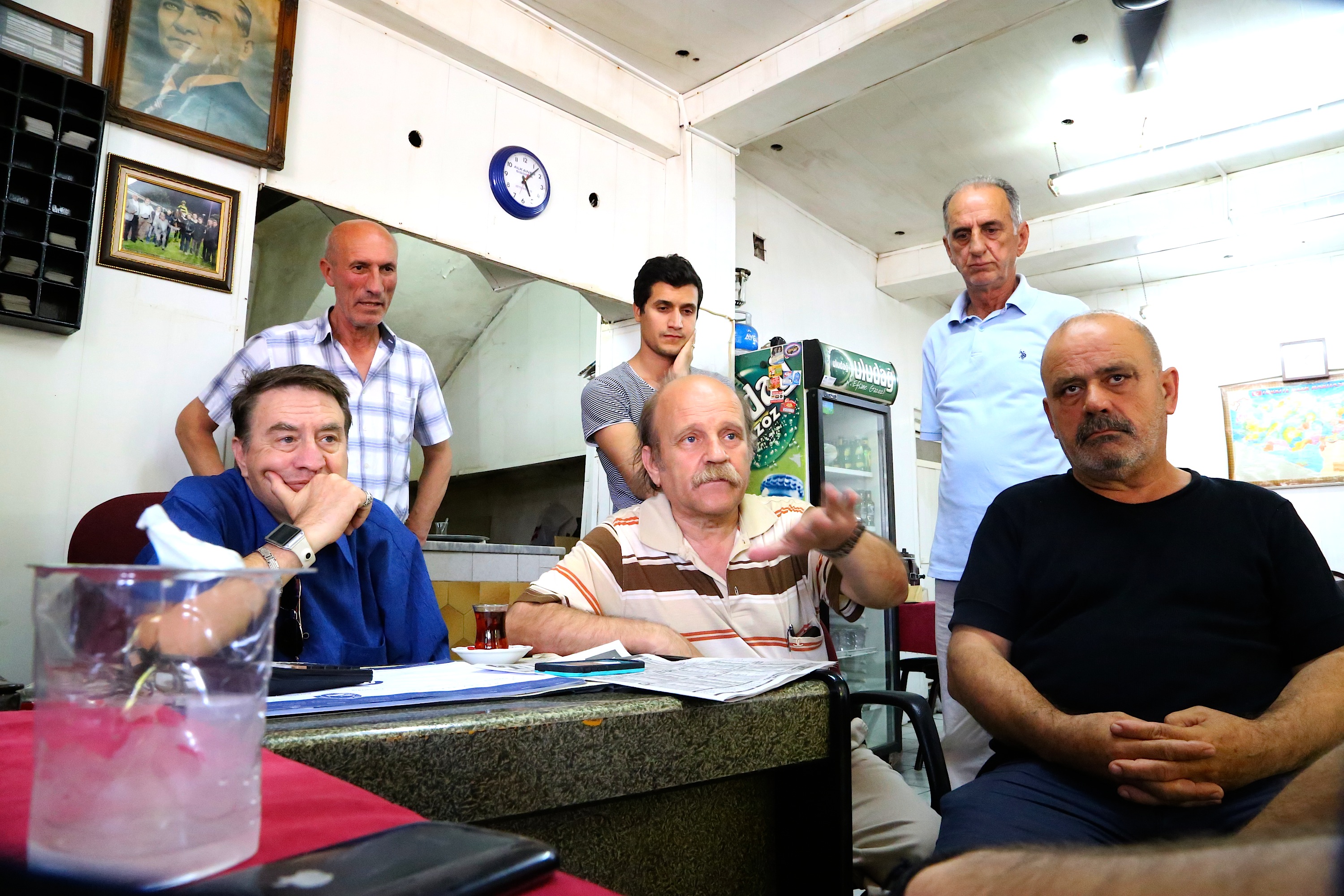 Old-timers in a downtown cafe remember when Eyüp was smaller and more intimate, if poorer. Photo by Şaziye Gourley-Ozhayta

Selçuk Palas owns the teahouse Kahve in downtown Eyüp. His family has a long history here: they moved to Istanbul in 1871, and soon settled in Eyüp.

The neighborhood has grown overcrowded and pricey, he complained.

“When I was a child, Eyüp used to be green and nature-filled,” he reminisced. “Now all it is apartments and asphalt.”

“I remember just how clear the Bosporus was,” he continued. “I remember when weddings and celebrations were going on, people were becoming drunk and throwing chairs into the water. The water was so clear that I could see the chairs. I went down and got them and then charged the people to get them back. Now, from pollution and such, the water is dirty.”

The Golden Horn is in fact much cleaner now than it was in the mid-20th century, when industry lined its shores, and waste was dumped into the Sea of Marmara.Well-off people moved to nicer neighborhoods, and the area deteriorated. Now, “many people are coming from middle and eastern Turkey to find residence here in Istanbul because of unemployment,” Palas said.

Selçuk Palas, owner of the teahouse Kahve, complains that Eyüp has grown overcrowded and overpriced. Photo by Şaziye Gourley-Ozhayta

Kaya, too, sees a few downsides to population growth.

“As the slum areas are being demolished, big apartments are coming up in their place,” she said, noting that one big building is rising in front of her new house, and will soon obstruct part of her view. “As buildings are added, businesses are growing. As businesses grow, there is a quality change within people.”

“There used to be so many wooden homes,” Palas recalled. “Wooden homes that have gardens within them. As the wind blew, your home would smell so fresh. Now you look around, and all you see is apartments, dust, asphalt, and the smell of the Bosphorus.”

Housing prices are climbing, too, he complained. City regulations prevent the demolishing of historic homes, but residents suspect they are occasionally burned down, so new homes may be built in their place. And the neighborhood is packed during festival periods.

“There is so much traffic here during Ramadan,” Ozkan said, “that it comes to a point where there is a traffic deadlock.” 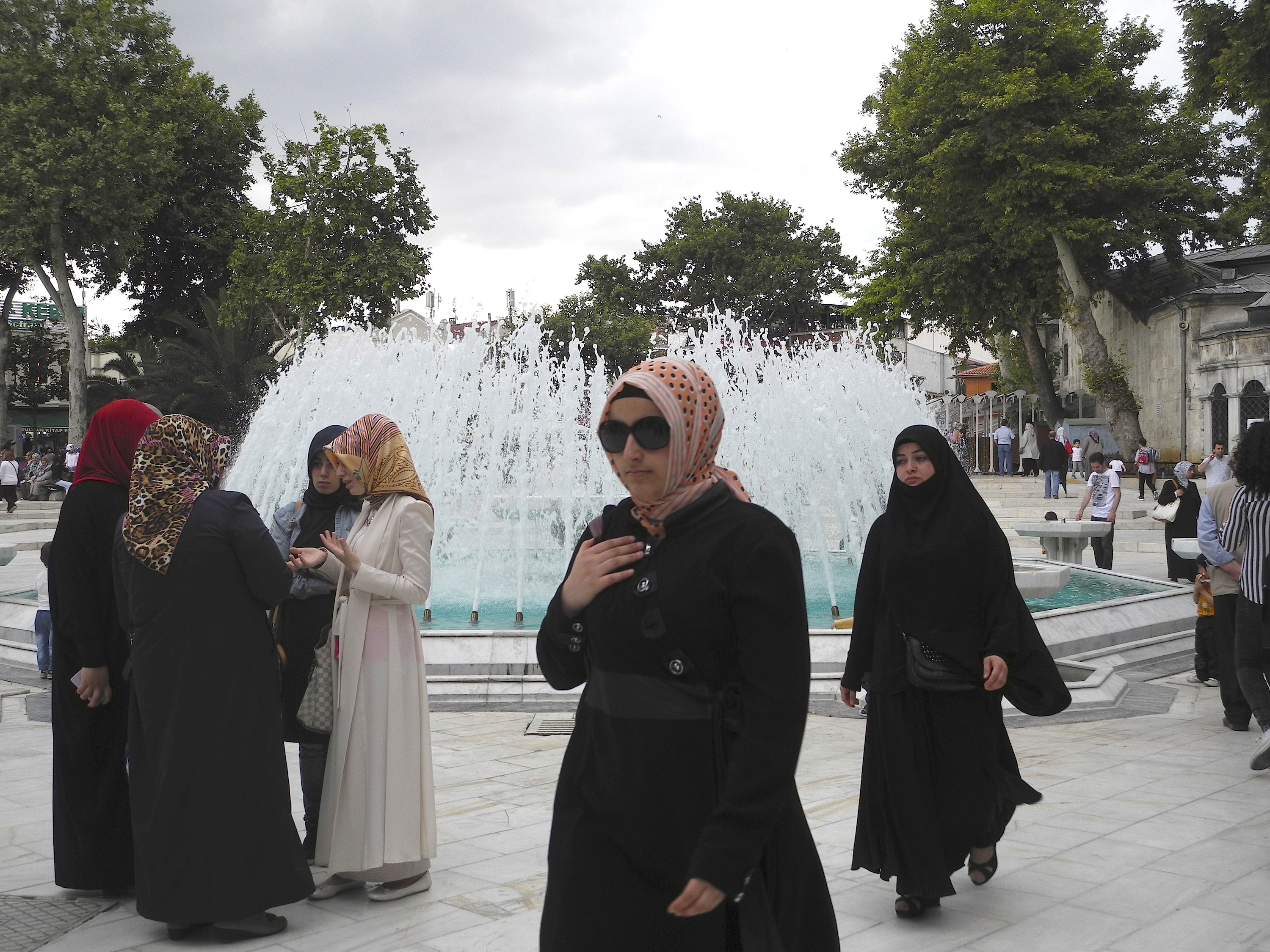 Eyüp is a popular tourism destination for devout Muslims from around the Middle East. Istanbul Project file photo.