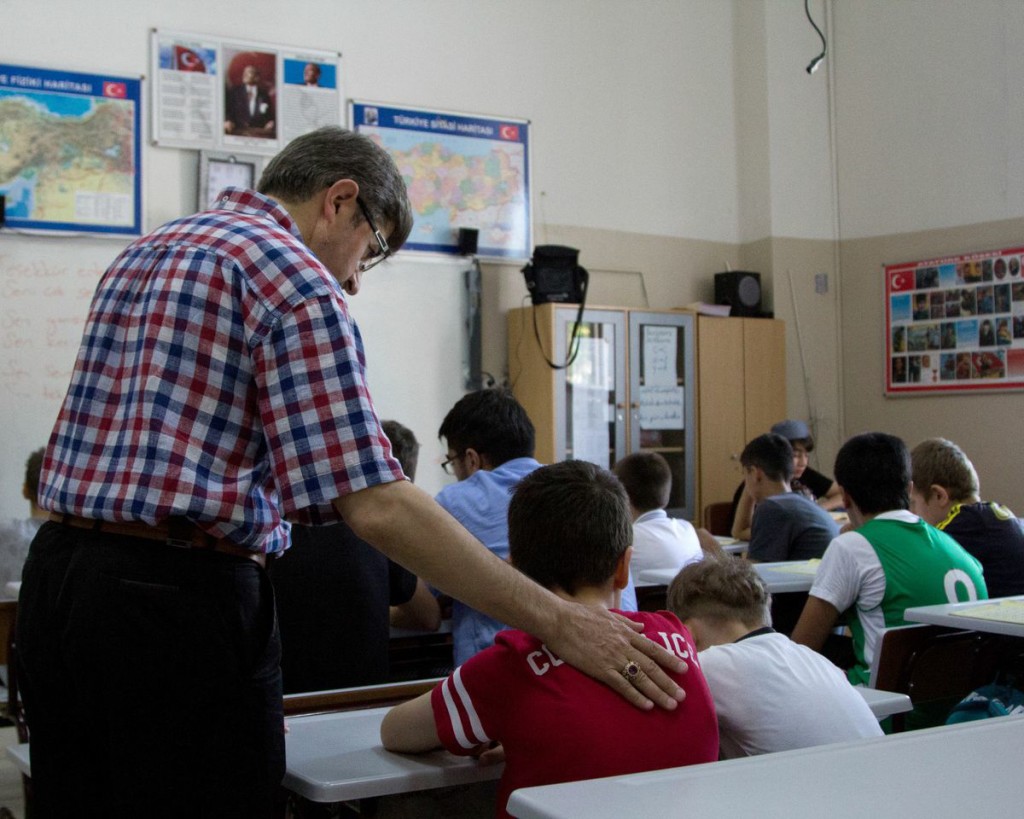 When not calling the faithful to prayer, Fatih Mosque muezzin Necdet Ergin teaches classes in singing and religion to children. “I have to pass everything I know to them,” he says. Photo by Austin Montgomery

Thought you were hearing a recording? You weren’t. Singing the call to prayer is a sought-after job for Turkish religious conservatives

Each day, muezzins from mosques around Istanbul squeeze through small doors to climb up the minaret, spiraling their way closer to the heavens to deliver the call to prayer to over 14 million people.

Halfway to the top of the minaret sits a platform between the narrow marble stairs with two switches: one for light, the other for the microphone. Although the call to prayer is the same, each singer adds a different vocal style to its timeless verses.

His voice resounds through the minaret, demanding attention. The delay of his voice from the minaret to loudspeaker creates an eerie echo inside the narrow tower, a melding of pitch and reverb all culminating in a spine-shivering melody that brings the faithful to their knees.

Turkey is officially a secular nation, and tourists visiting Istanbul sometimes assume that religion isn’t important; it’s not uncommon for foreigners to mistake the ezan, or call to prayer, for a recording.

Yet Islam is deeply embedded in the society, with mandatory religion classes taught throughout Turkey. The job of the muezzin is highly esteemed, and many of Turkey’s 80,000 mosques have a full time muezzin.

The muezzin reminds observant Muslims of the importance of prayer, one of the few immovable aspects of life in a country of otherwise constant transformation.

The path to becoming a muezzin is different for all who pursue it.

On a swelteringly hot day at the beginning of the holy month of Ramadan, Necdet Ergin, a small, quiet, mild-mannered man, takes time away from speaking with friends in his office at Fatih mosque to read the ezan, or call to prayer, five times each day.

Leaving his office and before climbing the minaret, he washes his arms, neck, head and face, then brushes his hair and clears his throat. His voice is carries a strong melodic weight as he draws out the first line of the sacred verses, “Allahu Akbar.” [God is the greatest.] 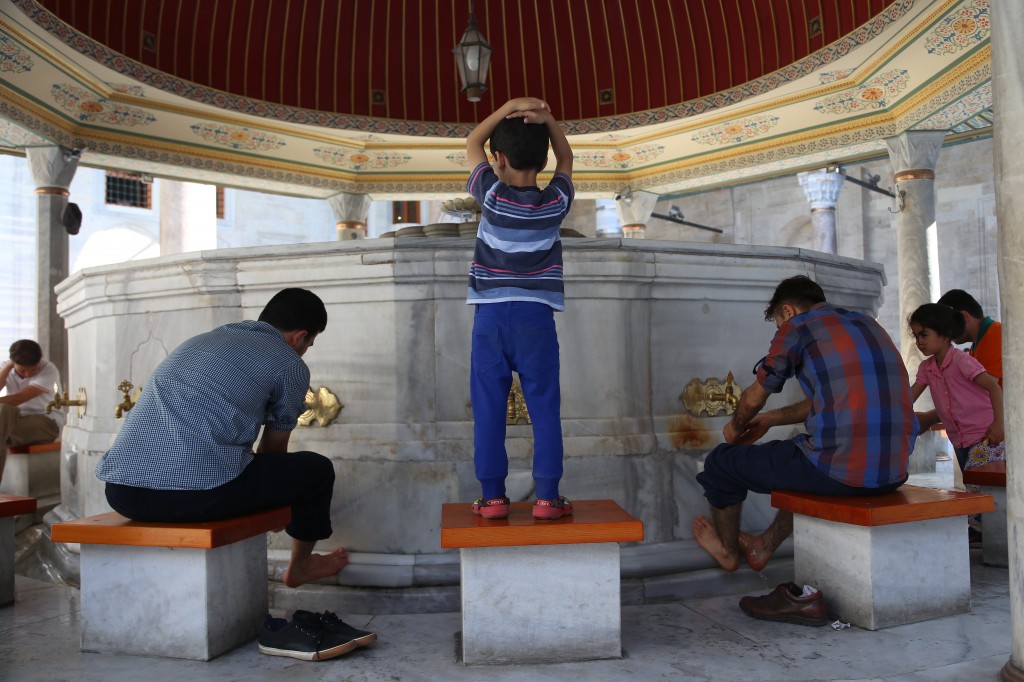 Ergin began training to be a muezzin when he was 18. The son of an imam, he was already exposed to a religious lifestyle, but only began to train after he heard a broadcast on the radio in the village of Karacaören, in eastern Turkey, where he grew up.

“Once I heard the muezzin reading a passage from the Koran, it affected me very much,” Ergin said. “I thought I should read the Koran like him, because I knew that my voice was beautiful. When you start something, the next step presents itself and now, here I am.”

After working at the much smaller Kucuk Mustafa Pasa Merkez mosque for 13 years, he passed the Public Personnel Selection Examination by the Directorate of Religious Affairs, and was appointed the muezzin of the esteemed Fatih mosque. The muezzin selection process is reserved for significant or large mosques around the city.

Fatih is a predominantly conservative neighborhood in the heart of Istanbul known for supporting the ruling AK party, or Justice and Development Party. It’s named after the conqueror of Constantinople and first sultan, Fatih Sultan Mehmet. Most people in Fatih regard Prime Minister Recep Tayyip Erdoğan as a hero who made Islam more visible in Turkey.

Since 1924, a ministry called Diyanet has regulated Islam in Turkey. Made up of a committee of religious experts and professors, and maintained by the Turkish state, it oversees the beliefs, worship and ethics of Islam within the country. Along with selecting muezzins, Diyanet is responsible for monitoring the sermons to be read by imams and muezzins during Friday prayer service.

According to a report by the Bureau of Democracy, Human Rights and Labor, the Diyanet’s penal code prohibits muezzins from “reproaching or vilifying” the government or laws while performing their duties. Muhammet Habib, author of the 2013 study, “Compliance and Negotiation: The Role of the Turkish Diyanet in the Production of the Friday Khutbas” claims the AKP is heavily involved in keeping up on the Friday readings.

“With the AKP government, for the first time in the history of [the] Turkish Republic, there has been a cleavage between the government and established state ideology in the understandings of religion and nationalism,” his report states.

This aspect of the state monitoring religion is seen by Ergin not as censorship, but as a necessary evaluation by the state to determine if less devout members of the congregation can understand each week’s reading. 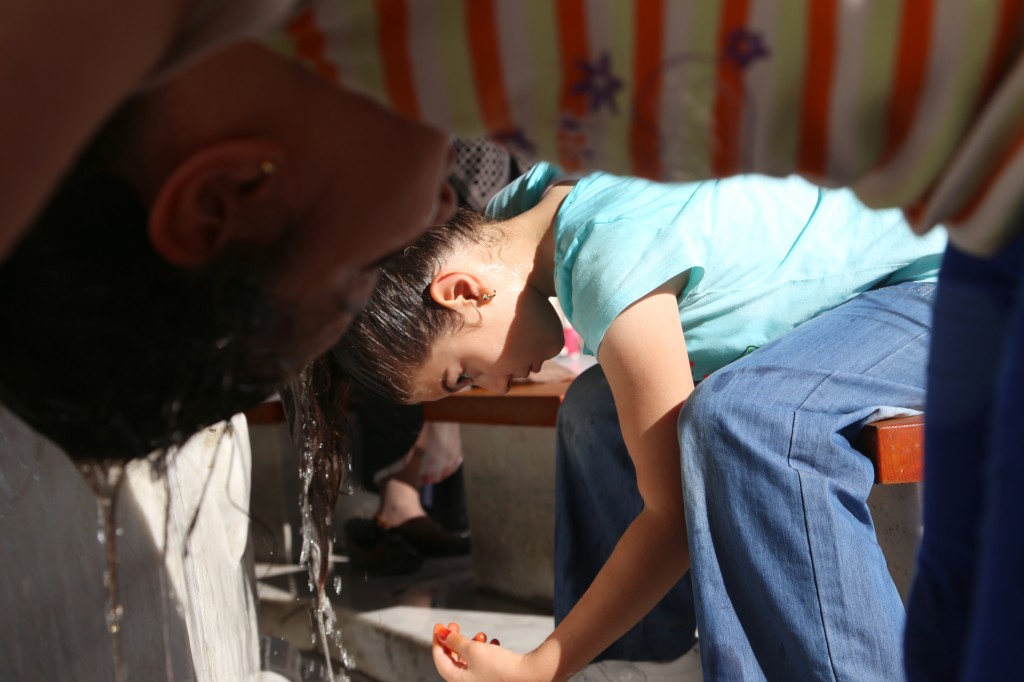 Girls washing their hair at the Fatih Mosque. Photo by Rachel Aston.

“It is not censorship; each sermon is evaluated, because conditions can change very suddenly,” Ergin tells me, referring to the political climate following the 2013 protests in Gezi Park. “Extraordinary things happen at unexpected times.”

Ergin has a particularly large responsibility because of the significance of Fatih mosque. Known as the Conqueror’s Mosque, it was built by Ottoman leader Fatih Sultan Mehmet after he seized Constantinople in 1453. It was constructed on the site of the Church of the Holy Apostles, and most notably, atop the burial site of Roman leader Constantine. After two earthquakes in 1509 and 1771, the mosque was completely rebuilt. The only remaining original elements include the galleries in the courtyard, the mihrab and the lower shafts of the minarets.

“The muezzins in Fatih and Sultanahmet are the most prominent singers in all of Istanbul,” said Mustafa Atalan, a butcher who works in the neighborhood. “It’s a great honor to be the muezzin at those esteemed mosques.”

According to Ergin, the post is not without its pressures.

“Our voice has to be stable, because hundreds of thousands will hear it,” he said. “Therefore, we definitely have to take care of our voice. It is certainly a hard profession. It is difficult to master it, it requires a lot of patience.”

His constituents in the neighborhood seemed to approve of Ergin’s voice.

“It’s nice when the call to prayer is coming from him,” said local grocer and former pro-wrestler Mücahit Dag. “I have been in the neighborhood for 52 years, and his voice is far better than other muezzins in Istanbul. He is a first class muezzin.”

When he isn’t singing the call to prayer, Ergin spends his three to four hour breaks between prayers teaching vocal and religious classes to students striving to become future religious leaders. Although it is a high-profile profession, he said there is no competition among fellow muezzins other than to be the muezzin younger students look to for guidance.

But a new phenomenon started in 2006 suggests that even the call to prayer can be vulnerable to the trends of the modern world. There’s an annual national muezzin competition – with a cash prize.

“They have used this to get higher ratings. I do not approve of it,” Ergin said. “TV channels use it for commercial benefits, I don’t approve of that. Is it bad? To say it is bad—maybe; it’s just different. If it is used for ratings it is not good. On the other hand, if it benefited society and culture, I would support it. It is very problematic if it is trapped by commercial advantages through television.” 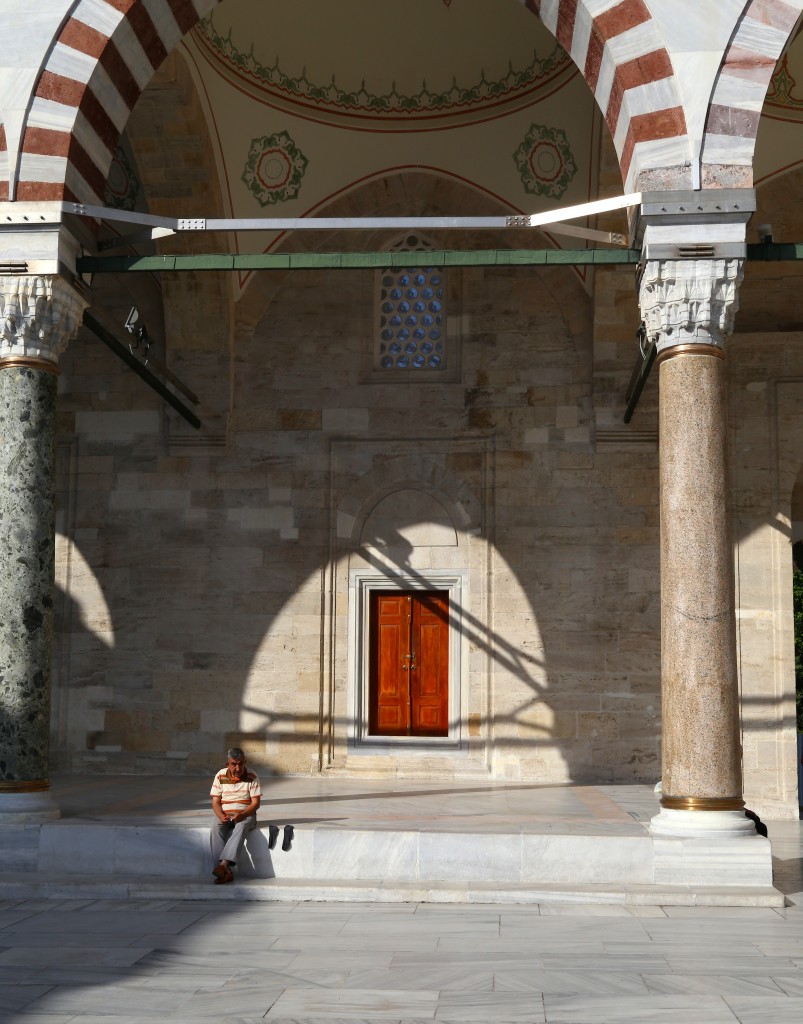 In the courtyard of the Fatih Mosque. Photo by Rachel Aston.