Loris Fraticelli slimmed down his company, fattened his pigs, and won awards

On a cool, cloudy morning in June, high on a hilltop overlooking the village of Calcinelli, the field alongside the pig house is empty. Rain begins to fall, then stops, then starts again. Suddenly a large, fully grown brown male pig pokes his nose out of the shelter’s opening and wanders out. Minding his own business, he walks around, freely eating grass in the field and fruit that has fallen from trees. Another pig walks out of the house, and another. Soon about a dozen animals are roaming freely around the fenced-in yard, a few of them trotting, not minding the rain at all. 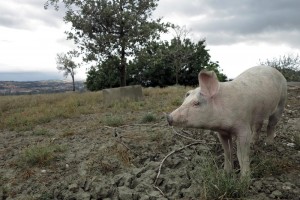 These are not average pigs. They can’t be found anywhere in the world outside of the Italy’s Le Marche region. They are Marca pigs, a special genetically engineered breed created by combining three different types of pigs that live in this area. The 30 or so Marca pigs living on this hilltop are also unusual because of their “semi-wild” lifestyle (unlike a group of several thousand that have a confined, mostly indoor life in a long building nearby). Their diet is above average, because the phrase “you are what you eat” is true for pigs as well as people. Besides the natural grass and fruit they find in the yard, the pigs are given other healthful foods, free of chemicals and undesirable ingredients.

This farm and its carefree pigs are part of the Fraticelli Salumi company’s strategy to create high-quality, good-tasting cold cuts and other pork products. After the company shifted its goals from large-scale production to a smaller, superior approach, it has been recognized for excellence. In 2010 it won first prize in the Premio Cremona competition for the best salami, and in 2015 the town of Cartoceto named the Fraticelli processing plant the best and cleanest factory in the region.

The Fraticelli factory is located in Cartoceto, a few kilometers away from the hilltop farm. On a recent sunny day in June, the air outside the factory is hot and dry. But past the factory’s doors, a gust of cool wind refreshes the senses and pushes the summer heat away. All that wind is followed by a rich aroma of salami and ham. Loris Fraticelli walks up wearing what looks like a chemistry lab coat. He has white hair and stands over six feet tall, yet he seems to have a soft, humble side. He gives a firm handshake with his large hands and bulky fingers, and offers a friendly greeting. Excited to discuss anything and everything about salami, Fraticelli wastes no time and starts to talk about his factory. 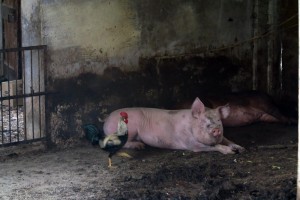 Fraticelli started producing pork products in 1967, continuing for 30 years, and then retiring at the age of 70, leaving the business to be run by his children. But that was not the end of his career. Only five years later, he came back to his own company after hearing about a new breed of pigs that were genetically engineered by Carlo Renieri, a scientist at the University of Camerino. With funding from the university and the regional government, Ranieri and his team combined the best genetic traits of three breeds of pig that have been living in the Marche for over a century. The new breed is called Marca. Today these pigs are raised in the town of Matelica, spending their first 70 days with their mothers, feeding on natural milk, before Fraticelli buys them and continues to raise them in his hilltop farm.

Walking through the cold air-conditioned factory, Fraticelli explains proudly with fire in his eyes that all his Marca pigs eat a nutritious diet consisting mainly of corn, oats, bran, barley, soybeans, and cereal that the company produces. All their food is free of preservatives, chemical additives that other farms use to speed up growth, and genetically modified organisms. This, says Fraticelli, reduces potential hazards to consumers, including increased cancer risks, as well as threats to the environment. He adds that raising the pigs in a “semi-wild state” is also a way to help the very best flavors of the salami come to life. Fraticelli explains that the semi-wild state is similar to “extensive farming”—what in the U.S. might be called “free-range”—in which farmers allow animals to roam freely in fields. In Fraticelli’s farm the pigs are free to go in and out of the barn-like house where they sleep at night. They can walk and run in an open field, which they do when it’s not too sunny and hot, and there they can also eat the natural grass and fruit. Fraticelli says his free-roaming pigs are fitter than average, with stronger muscles, which makes the meat tastier.

Fraticelli says his free-roaming pigs are fitter than average, with stronger muscles, which makes the meat tastier.

Fraticelli is very strict about how much his pigs weigh. Unlike less demanding operators who take animals for processing when they reach 110 kilograms, Fraticelli says his pigs have to weigh at least 170 kilograms. The pigs need to be fatter and heavier because he wants them to have a layer of fat that is at least three centimeters thick. That, he explains, makes ham and other products taste better.

Since Fraticelli redefined his business as a small, high-quality effort, the factory holds fewer people and fewer machines. The whole process can be done in just two rooms, each about 10 square meters. On this quiet day in June, only one man is needed for the special task of cutting the parts of the pig and seasoning them. Fraticelli points out that a lot of the process is done by hand with great care. He walks over to some carved meat and describes where each cut comes from by tapping his own body: neck, back, leg. Fraticelli says he is not concerned about his production rate; the most important things are how the pigs are raised and the quality of the process here in the factory.

Fraticelli walks excitedly to a door in the corner of the room and opens it. An even stronger aroma rushes out of the room. Inside are carts holding fresh-looking salami and different types of ham. Fraticelli explains that the meat is waiting to be seasoned enough to develop the company’s signature flavor. It will go through repeated seasonings, using only salt, pepper, and garlic. As it does, the meat will darken. This is important because most other factories use colorants to keep the salami looking red and ripe. Others may also use milk flour as an astringent and preservatives, which contain potentially cancer-causing nitrites and nitrates. Fraticelli says his use of salt allows the salami to keep its rich flavors and naturally preserves the meat for more than two months.

When asked to describe his career with one word, Fraticelli takes a rare pause. Then he looks up and says, “artigiano,” which translates as artisan, a worker in a skilled trade—in his case, the food industry. He says his dream is to provide better ingredients, better quality, and a higher standard of salami for those who are willing to pay for that experience. His future goals include having a stronger connection with other European countries and Russia in order to sell his salami, taking part in the World’s Fair in Milan, and keeping his customers happy. He also looks forward to having more happy pigs strolling around their fields on that hilltop. 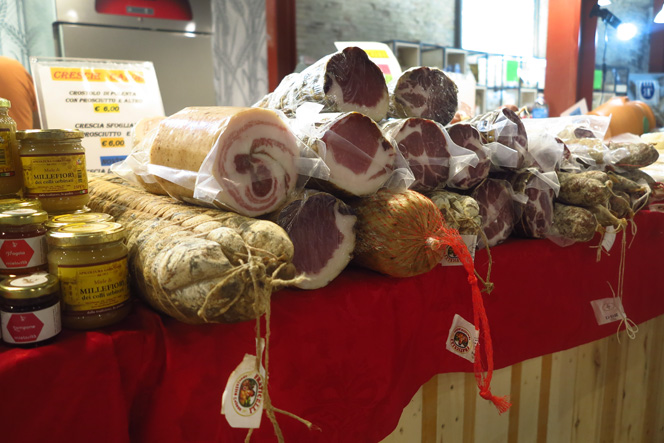 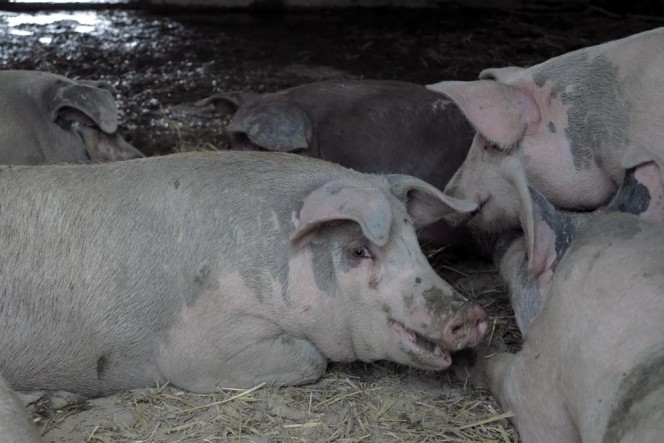 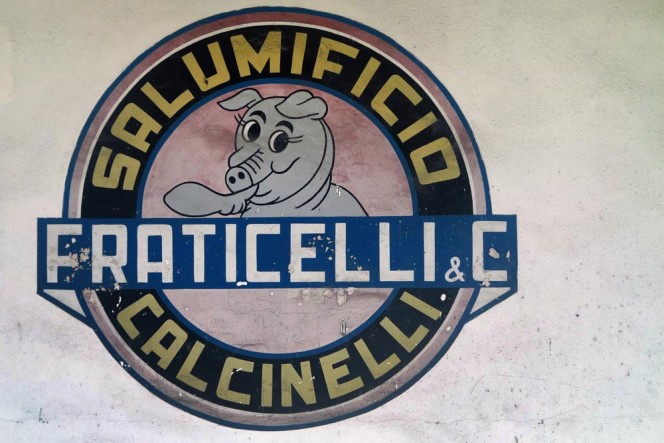 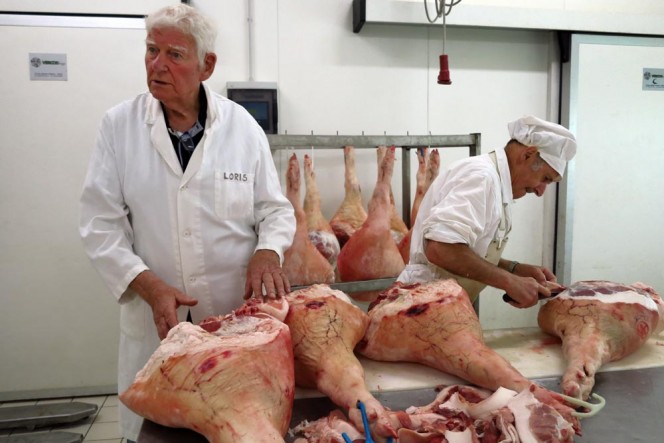 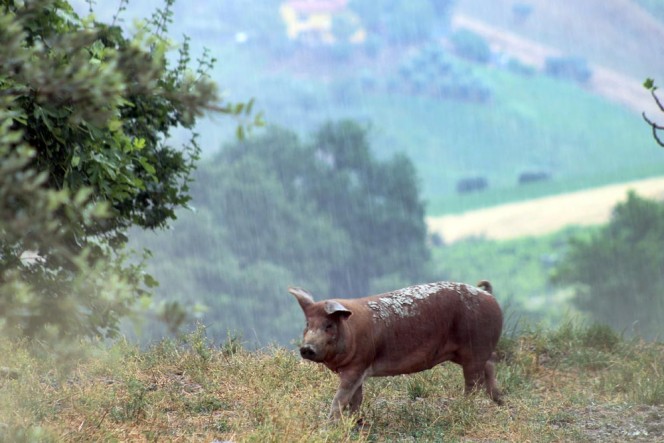 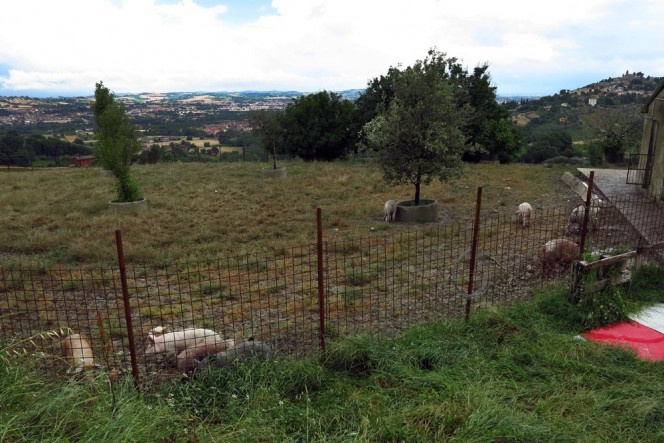 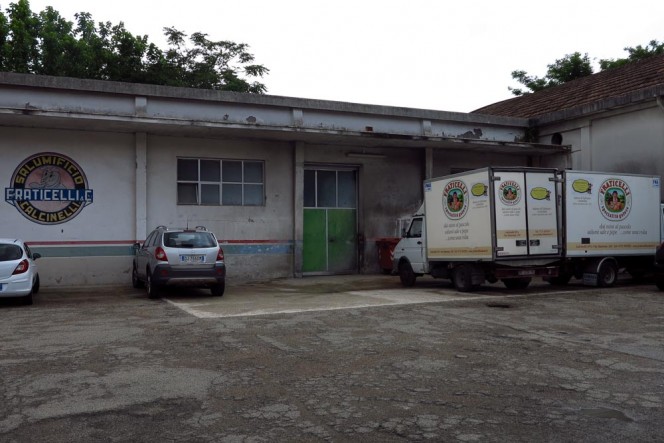 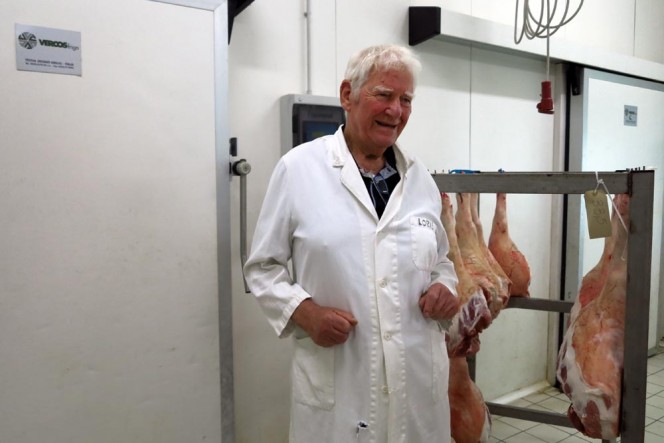