URBINO, Italy—A faint purring can be heard as Raffaella Betti brings in her two young adoptees for their annual check-up at Oasi Felina di Urbino (Feline Oasis of Urbino). The infirmary is small, with barely enough room for one or two people, a few small animals, and the syringes, medicine bottles, and other medical equipment that adorn the walls. The cat carrier is opened, the mewling increases, and cat eyes widen. 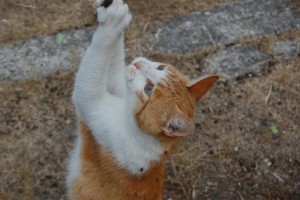 The cats in Oasi Felina are always up for some tug-of-war.

With a firm hold, a visiting veterinarian administers the required vaccines. Meanwhile, Enza Vaccarello, owner and operator of Oasi, quickly writes notes in her extensive records for the two young felines. Vaccarello is adamant about keeping up to date with all the adopted residents of Oasi—always asking for pictures, visiting the new homes, and keeping in close contact with the owners even years later.

“We need to be sure the cats are taken care of once they leave here,” Vaccarello explains. “There are many [people] who aren’t reliable enough to have cats, but adopt them anyway. If so, we can take them back here. At least here we know they live happy lives.”

Having taken their shots with little complaint, the brother-sister duo are well-behaved, sitting calmly on the plastic exam table with no coaxing. They’re back at home; they have no fears here.

Oasi Felina, on the outskirts of Urbino, is a hidden refuge. It may seem overgrown with weeds, and a little far out of the way to most. But Oasi Felina is a sanctuary and paradise to these forgotten felines. There’s room to explore, eat, and live behind the fences that surround Vaccarello’s cat care. Curious eyes dart in and out between bowls full of kibble, cloth mice, and water as Vaccarello makes her way through the rooms. The bright-eyed cats know who she is, and are drawn to her encouraging words, kind smile, and her bag full of treats. She is partial to none. She loves all her cats, but knows not to get attached. 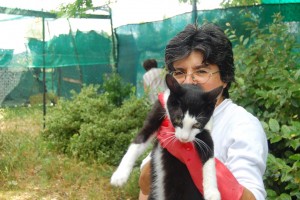 “They’re like having children,” says Vaccarello. “They are under your care for a while, then they go off to be happy somewhere else.” She has three cats she calls her own to keep her company at home, so she doesn’t worry.

The average number of resident cats at Oasi is between 80 and 100. They come from all over Italy, some even as far away as Naples. Some have been rescued by volunteers and other Urbino citizens from unfortunate situations and abusive homes; these can be fearful of every human that approaches. But there are many like Zigghy, Alex, and especially Ullo Mao, a tattered looking tabby with a big heart, who never hesitate to trot up to new visitors with a wagging tail. They readily rub up against anyone who pets them.

Vaccarello, a former English language teacher in Urbino, and originally from Turin, is well aware of the problem surrounding stray cats in all of Italy. She says the problem stems from people not taking the responsibility to care for those less able to care for themselves, human or not. It doesn’t affect only cats, either.

“I love cats because I love the world,” Vaccarello says. “If I had found a dog, I would have a dog rescue. Same if I had found a lion. But I found cats.”

Oasi Felina is a sanctuary and paradise to forgotten felines.

Vaccarello came up with the idea for Oasi Felina around 20 years ago purely from seeing three abandoned cats outside a church, not far from where the sanctuary now sits. She then joined an organization called Noah’s Ark. Created in 1998, Noah’s Ark’s goal was to aid the community in awareness and care of street animals. Oasi Felina was founded in 2001, moved to its current residence in 2003, and has bolstered Noah’s Ark’s effort to shelter and adopt formerly wild cats.

Oasi Felina is a volunteer-based enterprise. Generous donors provide all the funding, which pays for veterinary care and infirmary needs for all cat families. Urbino resident Ana De Angelis is a volunteer who Vaccarello says is the true brains behind Oasi. De Angelis has been donating her time and effort since 2013. She names the cats, cares for them, plays with them, and even performs the dirty work of litter box cleaning. De Angelis picked up this mission after leaving her job at a bakery in which she worked 10 years. Even with her time split due to her saxophone playing in a local band, she is giving Oasi Felina almost five hours every day. 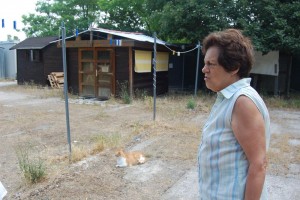 Enza Vaccarello looks out at her feline oasis, making sure all cats are playing nicely.

Guilia Baldelli, a biotechnology student at Camerino University in Camerino, Italy, is another major reason for Oasi Felina’s success. She uses her artistic spirit and public relations skills to make the organization a community-known name with active public support. Baldelli runs the Facebook page, as well as Gatti Matti, a website dedicated to the cats, their lives, and which ones are availiable for adoption. To generate donations, Baldelli and her mother make merchandise and sell cat treats and toys at events. “I wanted to be involved in something off campus,” Baldelli says. “And knowing that I’m helping these animals while meeting new people makes me happy.”

On June 5th, 2015, Oasi Felina di Urbino hosted a fundraising dinner at the local restaurant Il Cortegiano. Forty-five people sat at several tables in the garden behind the regular seating area, and were treated to a seven-course affair. The vegetarian plates continued as the volunteers hosted a lottery. The crew proudly donned new Oasi Felina T-shirts with the slogan, “I gatti di un gattile sono la razza piu bella” (The cats of a cattery are of the most beautiful race). Winners received baskets full of ornaments, cat treats, cat-themed bookmarks, and even more. According to Vaccarello, over 2,050 euro was collected that night, a wonderful success.

The dinner ended with a bang as a large cake was wheeled out to the garden. Two sparkling firecrackers erupted from the icing, and the crowd clapped and laughed in response. Vaccarello smiled along with them, knowing that she would carry all the support and love from the fundraiser back to Oasi Felina. Thanks to donors, volunteers, and the citizens of Urbino, unfortunate cats can live out their lives in an oasis all their own. 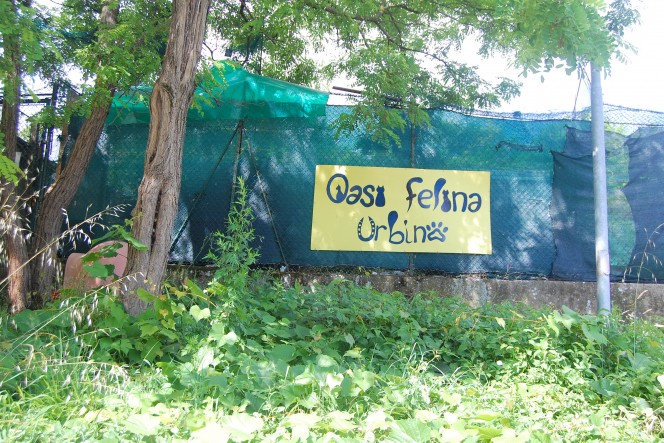 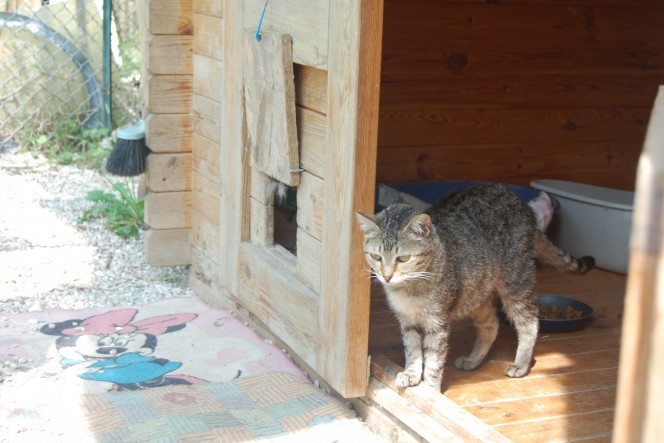 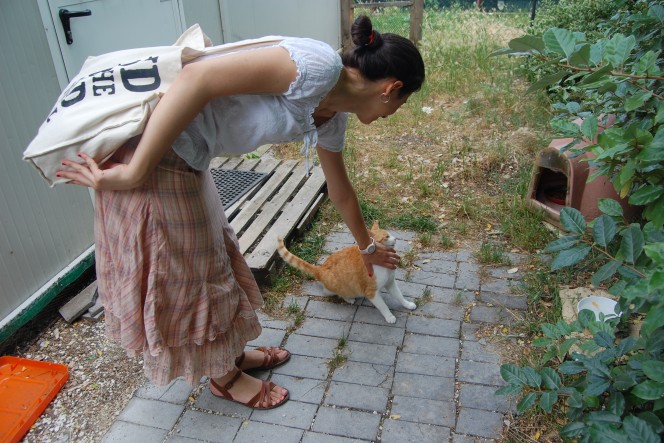 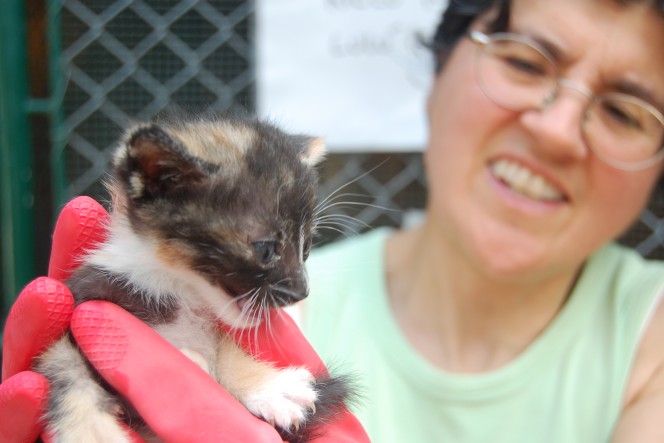 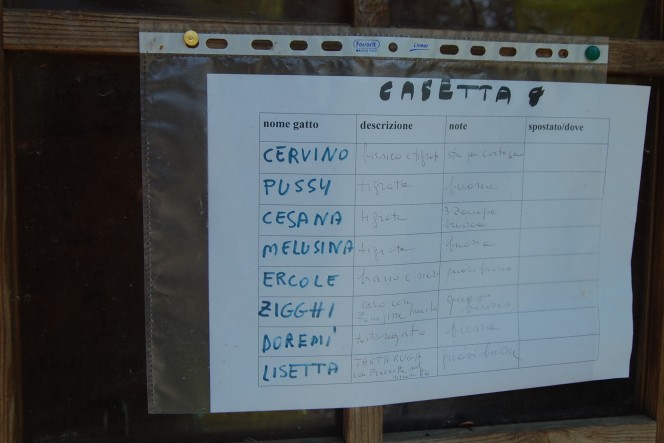 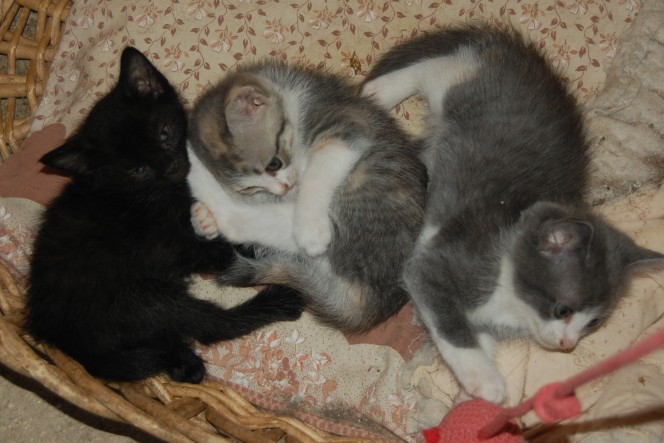 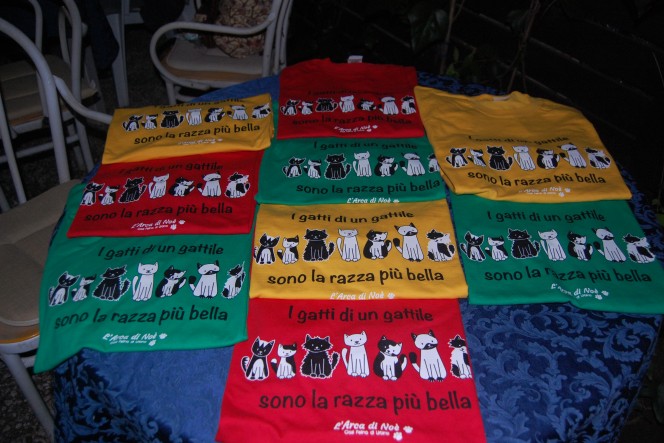 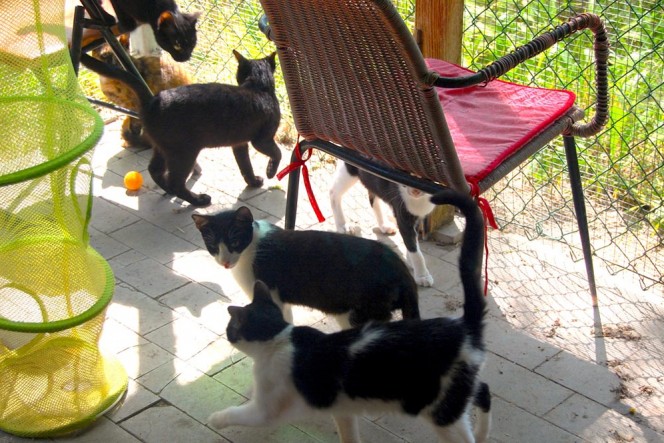