The Urbino Press Award focuses attention on the best U.S. journalists – and the city.

URBINO, Italy - On a warm June morning residents and tourists gathered in the main piazza awaiting the approach of a parade of townsfolk dressed as historic Renaissance personalities escorted by the city’s marching band and flanked by costumed horsemen.

It was not a scene from a movie or an annual cultural celebration. It was the Urbino Press Award – arguably the largest and most impressive award ceremony for American journalists, yet one few Americans have ever heard of. 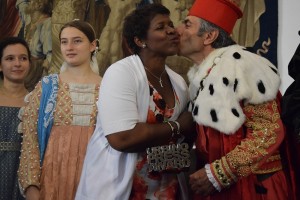 The Duke congratulates Gwen Ifill on her newest accomplishment.

Even this year’s honoree was surprised by the scope of the celebration. “I had a little bit of an idea of what to expect, but I had no idea it would be this stimulating,” said Gwen Ifill, co-anchor of the PBS NewsHour and one of America’s most honored journalists. “It was overwhelming and exciting.”

Now in its tenth year, the Urbino Press Award already lists some of the best-known and accomplished American journalists, including Wolf Blitzer, Tom Friedman, and David Ignatius.

But this elaborate ceremony is about more than recognizing excellent journalism; it’s about bringing business and attention from the United States to Urbino.

“When the ambassador announces the winner in Washington, it’s like the entire Italian government is giving them this award,” said Gabe Cavalera, spokesman for Urbino and secretary of the award.

It all started ten years ago when Giacomo Guidi, heir to Piero Guidi fashion line, and journalist Giovanni Lani were working at the Italian Cultural Institute of New York. The two Urbino natives began discussing the future of writing, art and media – and how to bring the attention of those fields to their beloved hometown. This inspired the idea of an international media-related event that symbolically represented what the courts of Urbino looked like centuries ago.

The best thing to do was to ask people to come back to Urbino in this century and find inspiration in the Ducal Palace to make a speech like they did centuries ago about the evolution of our society.

“The best thing to do was to ask people to come back to Urbino in this century and find inspiration in the Ducal Palace to make a speech like they did centuries ago about the evolution of our society,” said Lani, who has become president of the award committee. “It was natural for us to choose American journalists because the most influential country in our every day life is the United States.”

Urbino may be off the major Italian tourists routes today, but it was recognized as a cultural capitol of art and the intellectual world during the Renaissance. In the second half of the 15th century, regional ruler Federico de Montefeltro invited philosophers, musicians, artists and mathematicians to his court in Urbino to discuss what was happening in Europe and to hear their visions for the world. Urbino remained a center of these exchanges for at least two and a half centuries creating one of the most prestigious courts of Europe.

Upon returning to Urbino in 2005, Lani and Guidi approached Cavalera for help in developing their idea. After receiving political support from the Italian government and financial support from the Piero Guidi family, the three pioneers established the first edition of the award, won by Diane Rehm.

Since then, selecting the winner has followed a formula. Throughout the year, Lani, Guidi, and Cavalera regularly watch international news and follow social media. Around September, they start brainstorming for the next winner. They also ask previous winners to nominate three journalists.

“We have our own ideas, but it is very interesting to get their opinions,” said Cavalera. 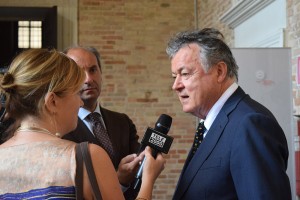 Piero Guidi is one of the main financial contributors to the Urbino Press Award.

They narrow it down to three names in January and have the Italian Embassy contact those journalists to make sure they can make the trip to Urbino if selected. It is ultimately up to the three founders to decide who the winner is.

“We pay attention to what was important that year,” said Cavalera “and we look for journalists that don’t go after the usual stories.”

From the beginning, the Urbino Press Award was never a one-day affair. The winner is first recognized during an April reception at the Italian Embassy in Washington. The official announcement is followed with a trip to Urbino in June to receive the award.

At the ceremony in Urbino, the winner, family and friends are greeted by a parade of drums, music and townsfolk dressed in Renaissance clothing, leading to a performance by the city’s orchestra in the courtyard of the Ducal Palace. The winner is then escorted to the vast palace ballroom where hundreds are seated and diplomats from both countries deliver speeches on the importance of American-Italian friendship and international journalism.

Finally, the winner makes an acceptance speech, which is followed by a reception featuring local wines and cuisine.

Cavalera says the reputation of the award has grown in Italy. “Some people call it the Italian Pulitzer,” he said.

By honoring an American journalist, the program develops a strong connection between Urbino and the United States, supporters say. Gian Mario Spacca, president of the Marche Region, told the Italian-American news site Amico, “Thanks to the very potent thrust of culture and of the excellence of the media and thanks to the many parallel initiatives linked to the prize, the knowledge connecting the Marche Region and the USA deepens and becomes richer with new ideas.”

This was a strategic move on Urbino’s part for bringing business and attention to the city. Urbino isn’t one of the most popular stops in Italy, but this award is shining a new light on the town.

Ifill thinks the strategy is working.

“Urbino is like a jewel, it sparkles up out of nowhere,” she said after the ceremony. “I think that everyone that has been here to accept this award comes away with a very positive, uplifting view of the town, which is exactly part of the goal. It’s not just to give an award, it’s also to introduce to people what Urbino is and what Urbino can be.” 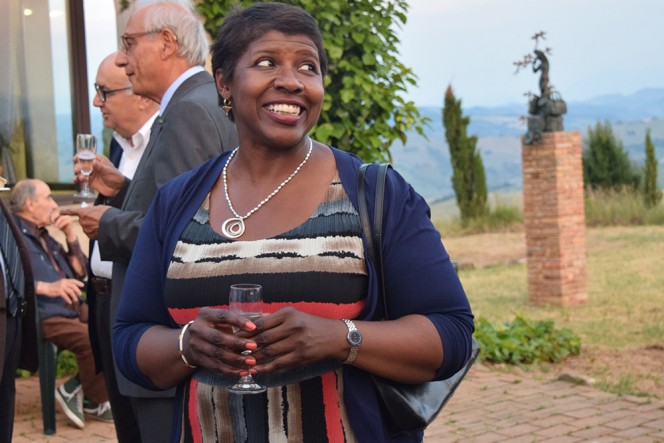 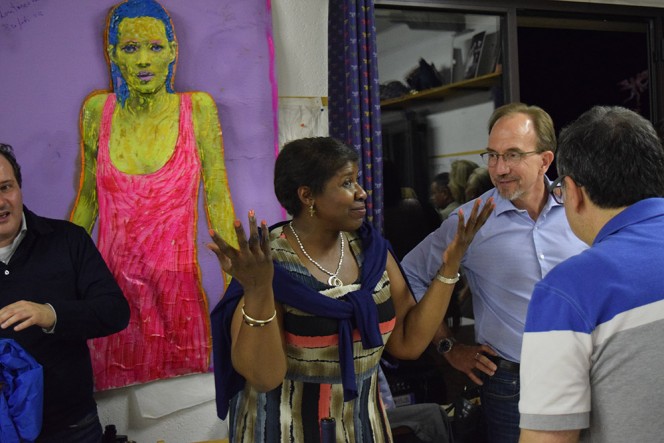 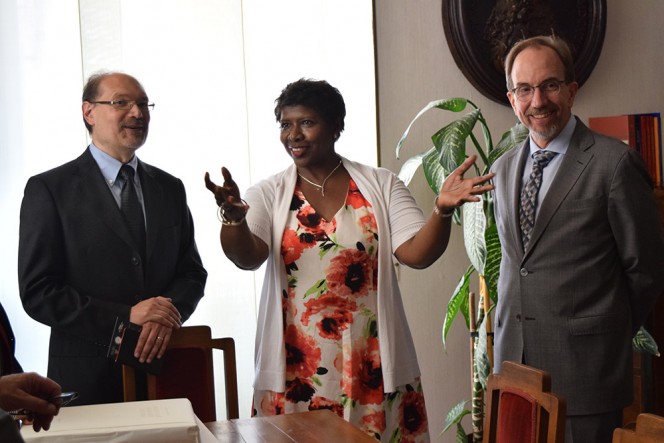 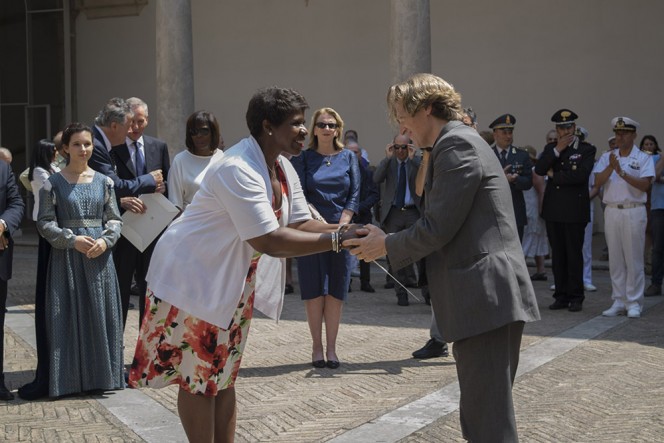 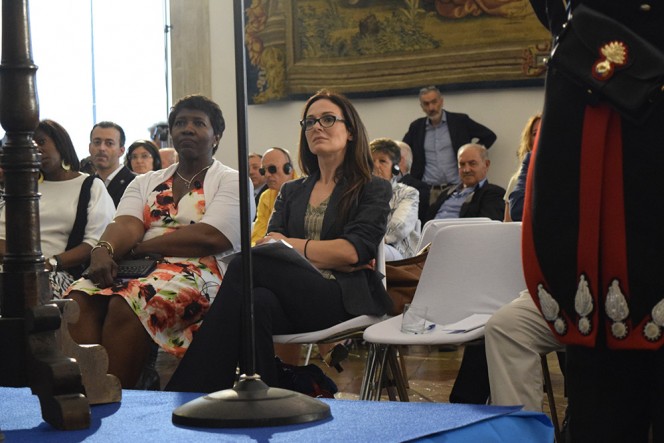 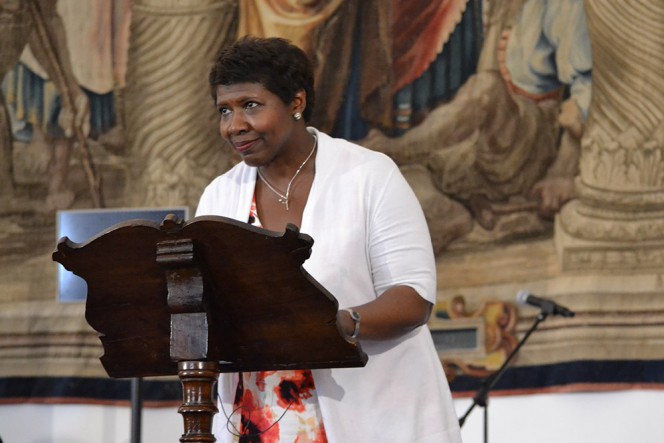 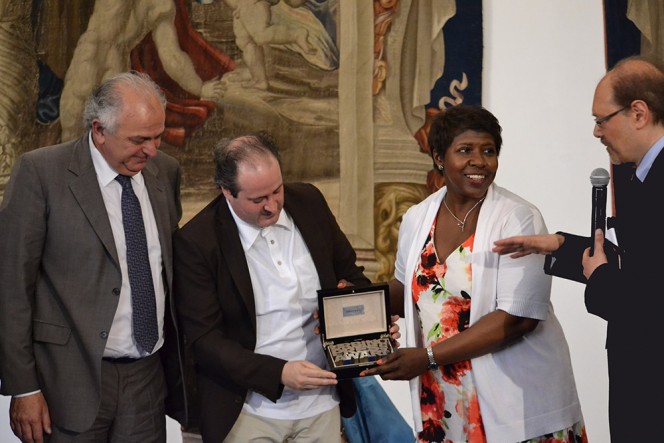 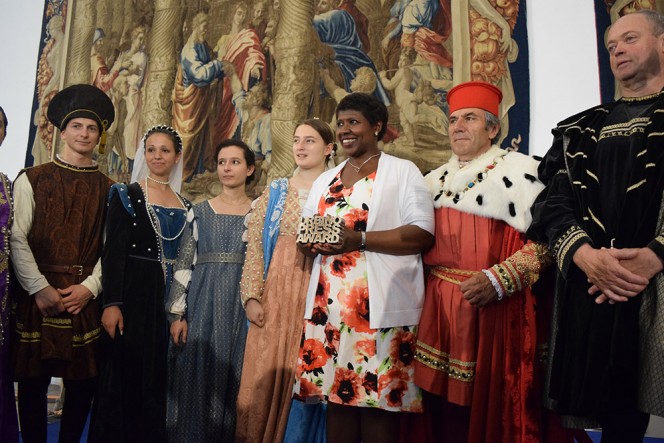 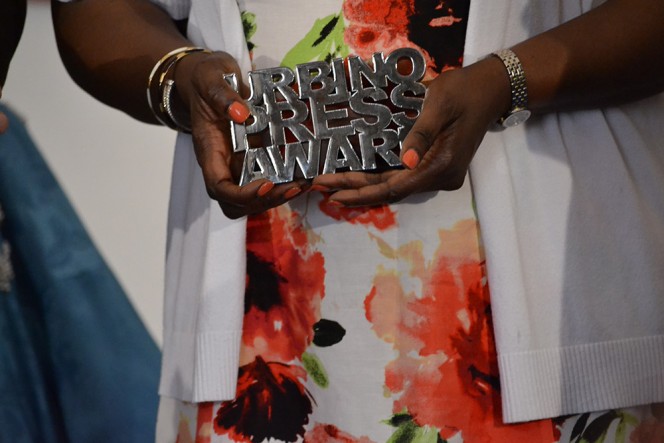 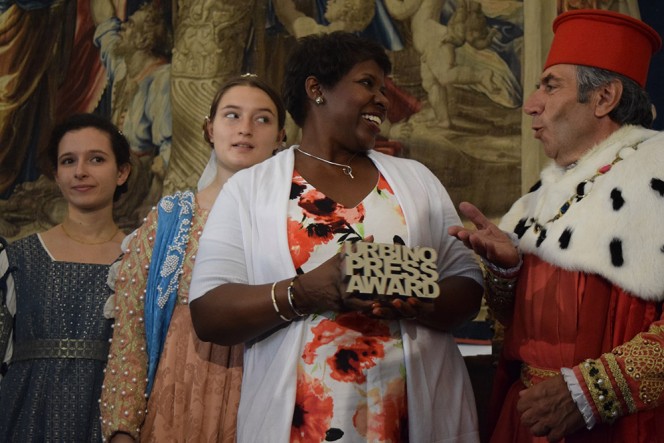