Maurizio Gambini’s journey has taken him from the family farm to Urbino’s top job.

SCHIETE, Italy – “Maurizio Gambini, the mayor of Urbino, is surrounded by friends young and old in the Centro Socio Culturale waiting to kick off Palio dei Trampoli, the centuries-old traditional stilts race here. The banner above him reads “Arte in equilibrio” – art in equilibrium.

It’s a fitting theme for the life Gambini now finds himself living juggling responsibilities to a city, a family and a business.

More than 40 years after quitting school, Gambini is starting the second year as mayor of one of Italy’s most famous Renaissance cities. It has been a remarkable and improbable journey with stops along the way tending crops, selling farm equipment and becoming immersed in organic farming before entering politics. 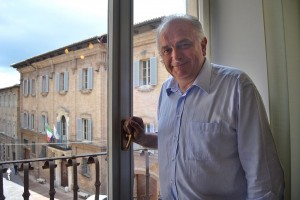 “I want to be the link between politics and the industrial world,” he said.

Aside from making appearances at public events and festivals, the mayor of Urbino makes the time to tend to the interests of his citizens first-hand, whether it is in person seated around the thick, timeworn table in his Renaissance-era office, or over the phone.

“The messages keep coming in,” he said. “If you do not solve them immediately, in five minutes there will be another problem.”

This wasn’t the life Gambini seemed destined for as a teenager.

Born in Urbino in 1960, Gambini was raised on a nearby farm He was forced to quit school at 14 to help out in the fields. When Gambini was 19, his father passed away, leaving him and his brother as the heads of the family. At 20, he took on odd jobs around the city, working in a factory and cleaning the streets of Urbino. Through months of manual labor, Gambini never forgot his great love, and at 22 resumed his agrarian lifestyle.

Within a few years his business interests expanded beyond the farm. He and a brother began selling farm equipment becoming successful enough to begin purchasing more farm property.

Eventually he became the president of his own business, Consorzio Agricoltori Biologici TerraBio Società Cooperativa – an association of organic farms whose products are sold across Europe. He also oversees the rental and distribution of machinery to other local farms. In recent years, the cooperative has expanded to include a department specializing in renewable energy. 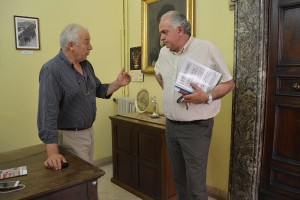 His political career began in 1999. Under pressure from his fellow farmers and businessmen, Gambini ran for city council so that the farmers and the laborers would have a voice in the government.

For the first five years, Gambini said he was extremely frustrated with the state of political affairs in the region. It was for this reason that he dropped his affiliation with the Partito Democratico – the Democratic Party, or PD for short.

Instead he became president of his own “civic list”, a community-oriented alternative to the party system which allows more direct involvementby members in political activity. Chartered in 2009, Gambini intended his Liberi Per Cambiare – Freedom for Change – civic list to result in more direct contact with residents, he said. He hoped to gain the support of Urbino’s working class, which had propelled him to the city council.

“Politicians feel entitled to their constituents, like they own them when it is, in fact, the other way around,” he explained. “Elected officials owe a great deal of responsibility to the citizens that voted them into office. Politicians should work for their citizens, not for their own wellbeing.”

In 2014, Gambini announced his candidacy for mayor of Urbino. The decision was the next step in the now-natural progression of Gambini’s political career. He ran independently against two other candidates, one from the PD and one from the Movimento Cinque Stelle – the Movement of the Five Stars, and won with a 57% majority.

The headlines of the regional edition of Il Resto del Carlino, a national newspaper, called it a “revolution.” Gambini had unseated the PD, who had been in power in Urbino since the second world war.

The change was indeed a revolution in local politics. One of his first acts was to eliminate the chauffeured cars financed by public funds. Instead, Gambini drives himself in a Volkswagen Touareg, a luxury SUV with an automatic transmission.

Since his upset in the election last summer, Gambini discovered that winning may have been the easy part. When he is not holding court in his office with the citizens and other community leaders of Urbino, he can be found rushing across the hilly region, cutting ribbons at kickoff events, speaking at receptions, or even simply observing the goings-on at a construction site.

Alcohol was invading the city. The citizens were angry with the students. This initiative resulted in the banning of open containers of alcohol in public spaces within the city.

Despite being the most powerful man in the city, Gambini has not forgotten his roots — cleaning the streets of Urbino. Last year, he spearheaded an initiative to purge the streets of binge drinking by students and the mess that ensues.

“Alcohol was invading the city,” said Gambini. “The citizens were angry with the students.” This initiative resulted in the banning of open containers of alcohol in public spaces within the city.

Somewhere in the balance between his two jobs, Gambini also makes time for his growing family. His daughter, Lucia, is only a year and a half old. Lucia and her mother often accompany the mayor to his many social events – sometimes as many as three in one evening.

And sometimes the job and personal life mesh easily.

After a recent at the office, Gambini droves to Schiete near his home and company headquarters –just in time to preside over the opening of the Trompoli while sitting under the banner “Arte in equilibrio.” 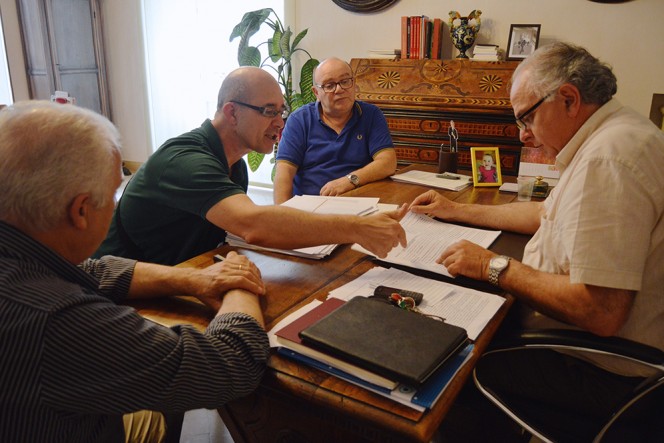 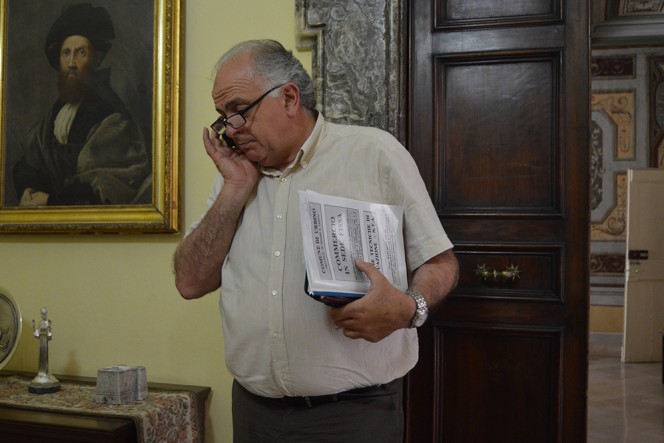 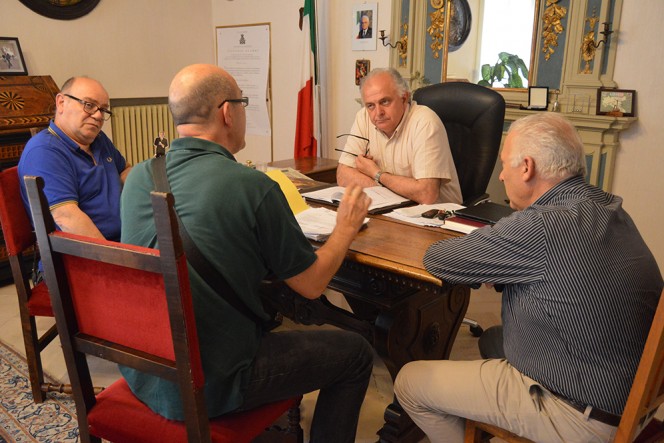 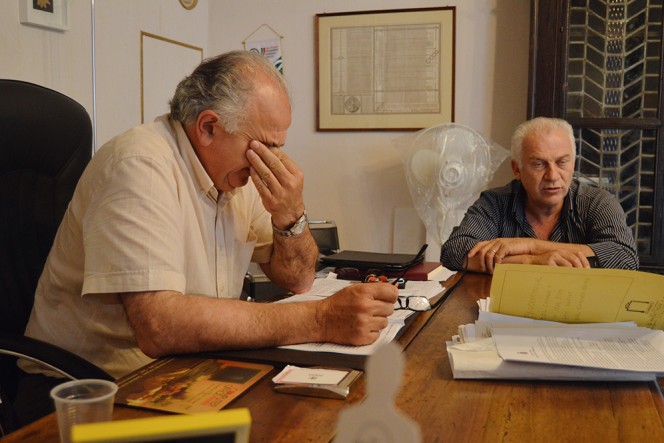 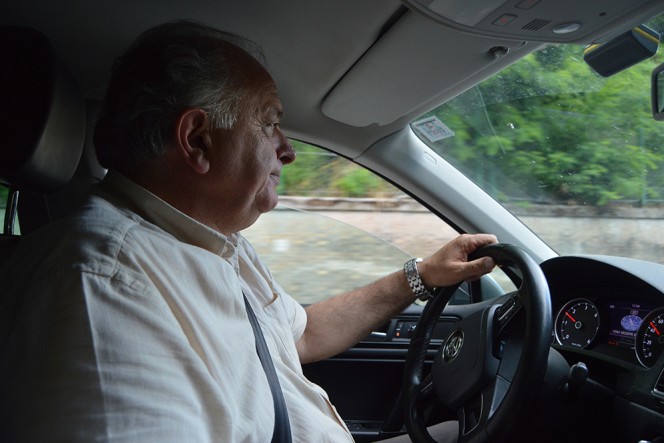 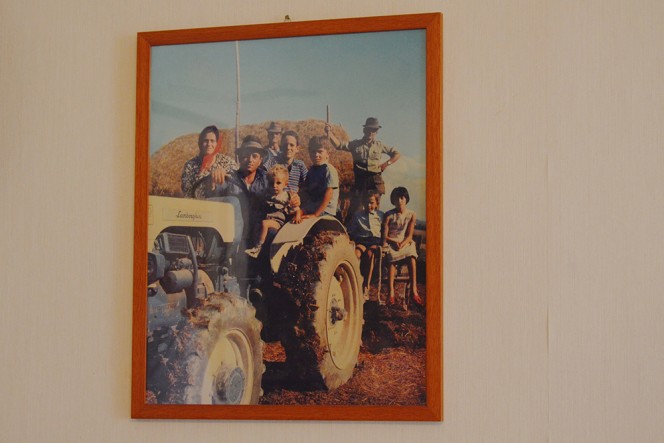 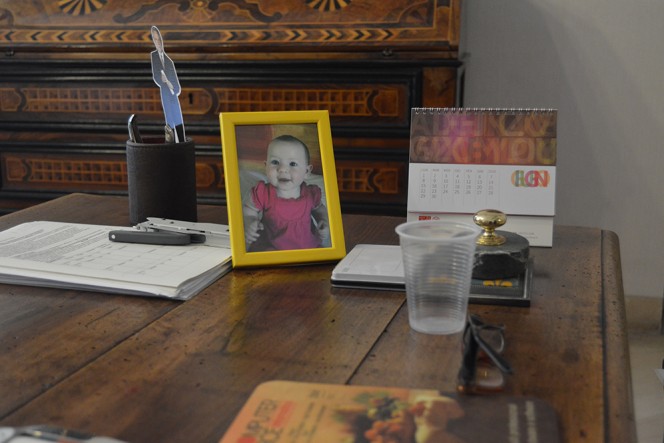 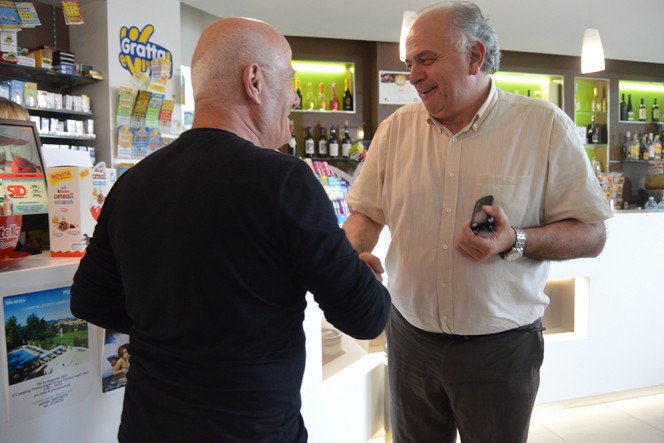 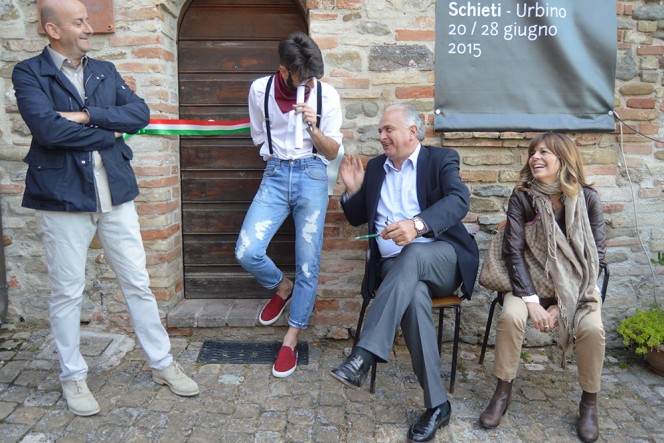 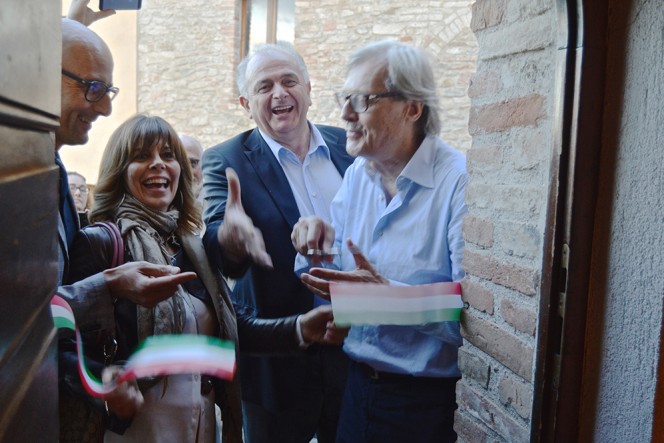 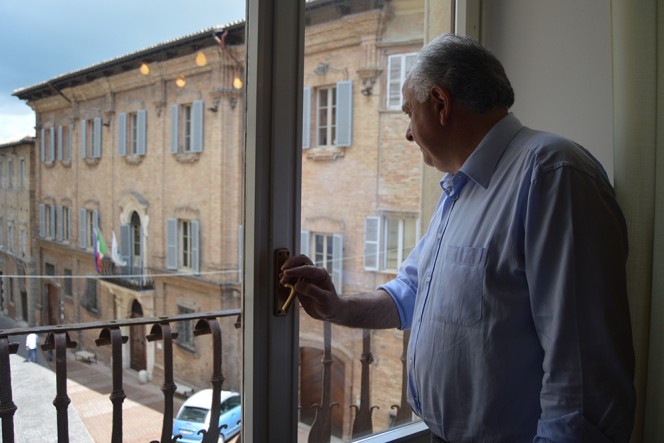