The Other Oil Crisis - Urbino Project 2015

PERGOLA, Italy – Mario Baiocco, 57, takes a magnifying glass out of his neatly pressed lavender button-down shirt and looks closely at a small branch of olives. He leans over the table, lifts the magnifying glass to one of his hazel eyes, and squints, making wrinkles between his eyebrows.

2014 for cultivation and agriculture was absolutely damaging.

“You see these,” he says pointing to a small green ball. “These are olives that have just started to grow.” The branch is covered with delicate green olives that, according to Baiocco, are growing at a proper pace.

Last year, a branch like this would be much harder to find. The poor weather conditions and insect infestation ruined olive trees all over Italy, affecting olive oil producers such as Baiocco.

“2014 for cultivation and agriculture was absolutely damaging,” says Baiocco.

The weather and olive fruit flies had a major impact on olive oil production and prices. The olive fruit fly, also known as Bactrocera oleae, lays an egg in the olive and once the egg hatches, the new larva makes its way to the core of the olive. The exit of the fly is the most damaging part of this process because the fly digs a hole back to the surface, which darkens the skin color of the olive. 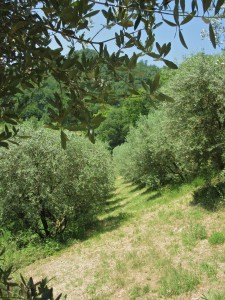 Baiocco has 250 olive trees that line the perimeter of his front yard.

The weather during olive growing season last year worsened the Bactrocera oleae infestation. Normally, olives begin growing in May and are fully grown by the end of October to the beginning of November. According to Baiocco, the milder weather enhanced the production of the fruit flies. The fall and winter months were not as cold as usual. There was no ice, snow or freezing temperatures that could kill off the insects. Bactrocera oleae cannot survive extremely hot or cold temperatures. They flourish in mild weather conditions.

Not only did the poor harvest conditions affect insect reproduction, but the insects appeared much earlier than normal. Baiocco says the insects started to damage the olives in June, whereas they usually begin affecting the fruit in August or September. Olive oil producers like Baiocco were not prepared with the proper pesticides. “We didn’t use pesticides last year because it was too late,” he says. The fruit flies had already damaged the olives.

Italians refer to the 2014 olive season as the “black year” because olive oil production decreased 35 percent from the previous year. Baiocco usually makes about 300 to 400 liters of olive oil each year, which takes from 2,000 to 2,700 kilograms of olives. Last year, he did not produce any oil at all.

Baiocco makes oil for his family to use at home and the leftover he sells to friends. He does not have the proper machinery to produce the oil at home, so he travels about 12 to 15 miles to the frantoio, the Italian name for an oil mill. 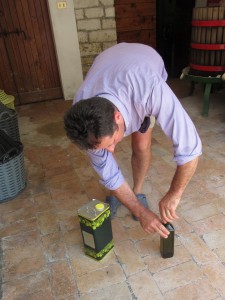 Baiocco keeps empty bottles in his house for when he sells the leftover olive oil to friends and family.

Industrial oil producers own and operate the frantoios, which stopped working last year. Baiocco says producers attempted to make oil with the olives that weren’t damaged, but it was not of the same quality so they simply stopped producing oil altogether.

Due to the low production of oil, prices soared last year and haven’t changed since. Baiocco sells one liter of oil for € 9, or which is approximately $10.22 in U.S. dollars. He explains that this is a reasonable price considering he is not an industrial producer and it covers all of the labor and packing costs. Baiocco’s olive grove is about 21 miles from Cartoceto, the main olive oil producing city in Le Marche.

“There are hills and hills of olive trees,” Baiocco says about Cartoceto. There are many more industrial producers in Cartoceto and they sell their oil for a slightly higher price because that is what they are famous for. If you walk into a specialty food store anywhere in Le Marche region, you will see that all of the bottles of olive oil have the Cartoceto name on them. The price of Cartoceto-produced oil is at an all-time high and can be found at a specialty food store for about € 15 to € 24 per liter, the equivalent of $17 to $27.

Gourmet food shops like Raffaello Degusteria, located in the center of Urbino, has shelves full of Cartoceto-produced oil. The shiny dark green bottles line the shelves with the white price stickers that haven’t changed for the past year. Valentino Gostoli, a co-owner, says the price of oil depends on the production, the type of oil and the consumer demand.

Gostoli, who has been selling olive oil at his shop for eight years, says this is the highest that prices have been. Because the production of olive oil in Italy has decreased by 35 percent since 2013, retail prices are rising. Some producers have doubled their prices because of the “black year.” Gostoli does not think prices will drop any time soon. 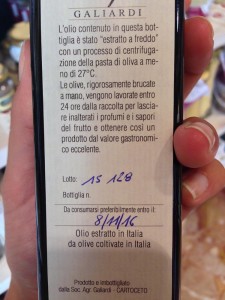 This bottle of olive oil states that it is produced and bottled in Cartoceto.

The drastic drop in oil production is reaching overseas to countries like the United States, which imports over 95 percent of its olive oil from the Mediterranean region. The price of imported olive oil increased for buyers in the United States by approximately 30 percent.

Not only is the price hike affecting producers, retailers, and importers, but it is also impacting businesses such as local restaurants. Terrazza del Duca, a restaurant in Urbino, has been purchasing olive oil from producers in Cartoceto for seven years. Last year, the managers noticed the price had risen slightly when doing their biweekly purchase of olive oil.

Luca Sideri, a chef at Terrazza del Duca, says the restaurant uses olive oil in almost every dish on the menu. Whether it’s pizza, pasta, meat or fish, the expensive commodity is still needed regardless of the price hike.

The restaurant buys 20 liters of olive oil every two weeks for about € 13 per liter. Because it buys oil in bulk directly from the producer, it is not as expensive as going to a gourmet food store like Raffaello Degusteria. Regardless, “the cost is now a few euros more than before,” says Sideri.

The Mediterranean climate allows for the production of olive oil, which is why it is such an important ingredient in the Mediterranean diet. “Unfortunately, it’s always related to climate,” says Sideri.

Olive oil producers like Baiocco are continuing to watch their olive trees blossom this season with fear in the back of their minds. “This year is a little better,” says Baiocco as he lifts a branch from a 25-year-old olive tree. “We are already checking the fruit and hoping the bugs won’t grow again.”

Baiocco continues down the long path in his backyard that is lined with olive trees, old and young. With his head held high, he gazes up at his oldest olive tree. “Isn’t it beautiful?” 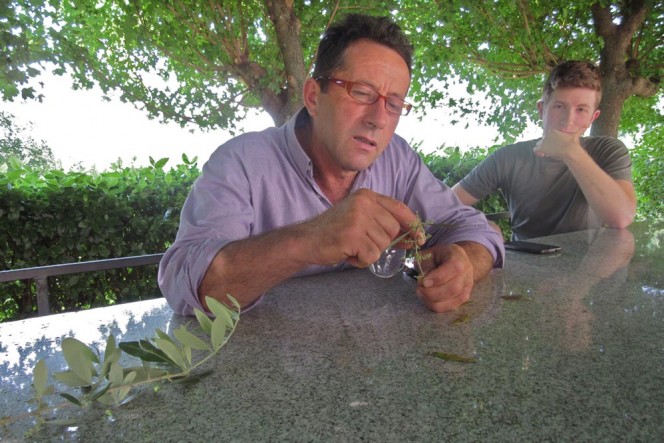 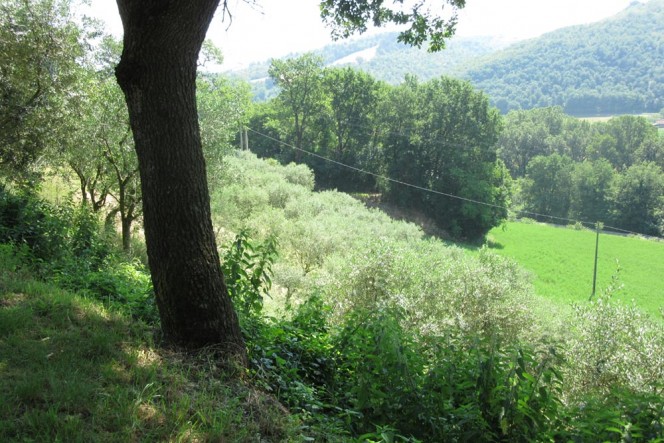 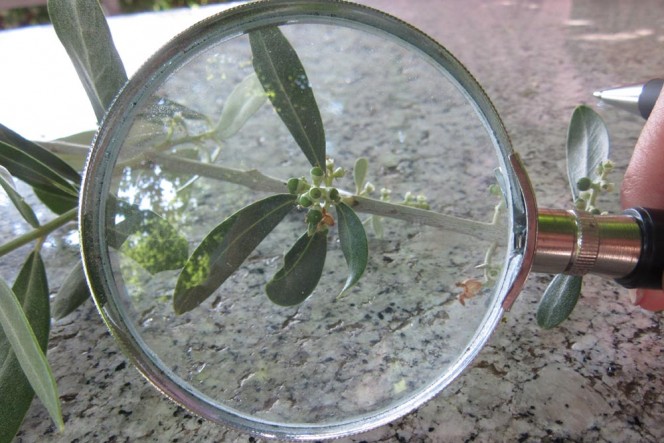 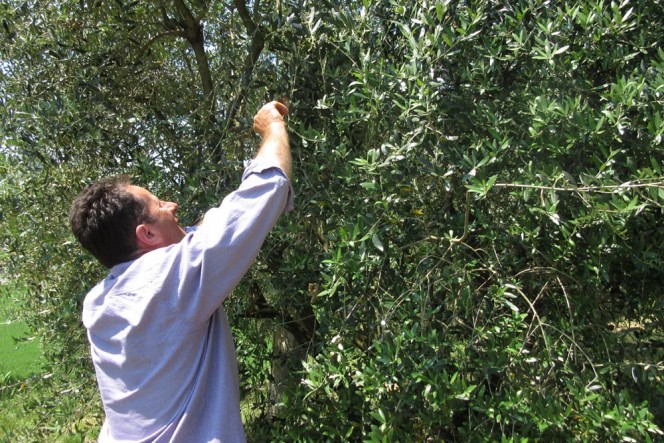 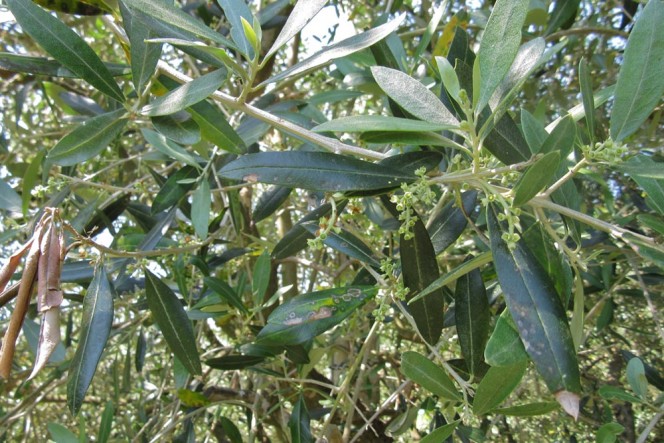 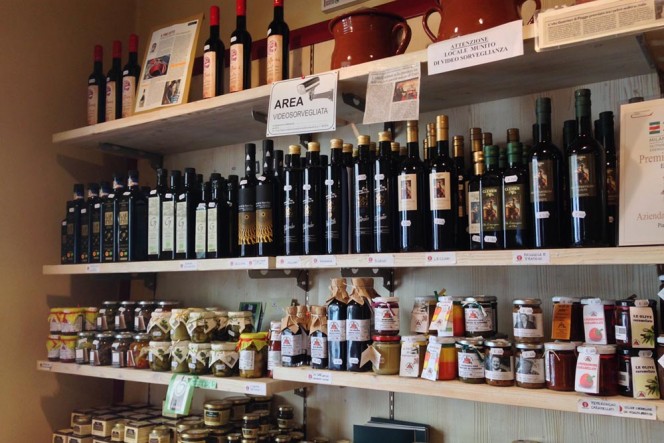 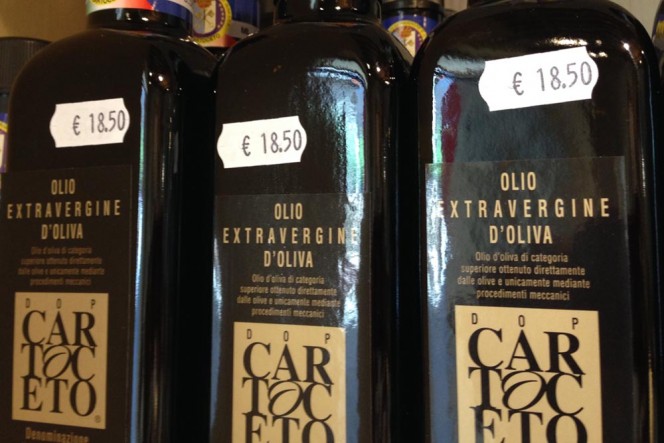 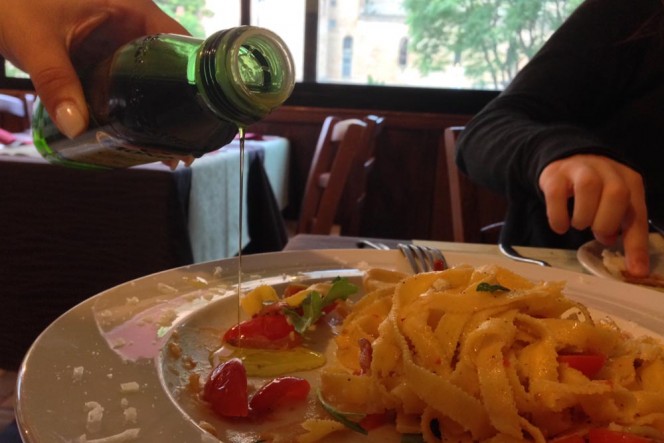