Learning about the art of cave-aged cheese from the Beltrami family.

CARTOCETO, Italy – Cristiana Beltrami was carefully approaching the cement-sealed mouth of a cave deep in the cellar of Palazzo Rusticucci when she turned to her visitors and whispered, “Shhh…the cheese is sleeping.”

Four months ago her father, Vittorio Beltrami, lowered 3,000 wheels of pecorino – sheep’s cheese – into the cave before sealing the entrance to allow it to peacefully age. When awakened by Beltrami it will be Formaggio di Fossa – cave aged cheese, a product the family creates annually.

Gastronomia Beltrami is a family business that sells only what they produce by hand – extra virgin olive oil, fruit preserves and cheese. Locals and tourists from across the Le Marche region drive on hilly roads to find the small, tree-shaded shop with the distinct smell of cheese wafting from the door. 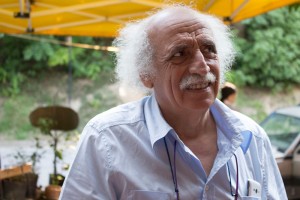 The shop is home to “The Einstein of Cheese,” a man whom American chef, television host and author Lidia Bastianich calls a genius.

This Einstein has white hair floating above his ears like clouds. Short in stature, he strides around the shop a short-sleeved blue shirt and his jeans slipping below his narrow waist. He stops his afternoon work to sit and talk with two visitors about his Formaggio di Fossa.

Retroinnovazione, the family’s motto, is “innovation that looks to history to link the present first to the past and then to the future,” he said. “Then from that, to make something new.”

Technology changes flavors. People don’t know how to eat properly, but I’m trying to teach them.

Their customers can sit on the front porch of the shop to try the different wines, olive oils and salami or bruschetta fresh from the brick oven. But Vittorio’s passion and true love lies with formaggio – experimenting with the milk from cows, goats and sheep. And the cave-aged cheese is his favorite.

Formaggio di Fossa was originally “created by chance” in the 18th century said Giuseppe Cristini, professor of Narratori del Gusto – Storytellers of Taste – at the University of Urbino.

Families in Le Marche and neighboring Romagna region used local caves to hide their food from Spanish invaders. When it was safe to remove several months later, they discovered the caves had made the cheese taste stronger – and better. 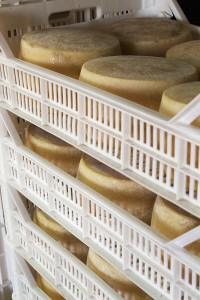 The wheels of pecorino are in the first stages of the aging process, resting in the upstairs cellar in Palazzo Rusticucci.

Cristini says Vittorio, his good friend, is a cheese expert, and a good friend. “He is a great observer and researcher in the field of cheese.”

Vittorio explained to his visitors there are many key components that contribute to the final flavor profile of a good cheese. He counts the steps on his fingers listing sheep, grass, a favorable climate, good milk – and timing. The sheep’s milk must be processed within three hours, then the aging process begins.

After the pecorino is created the cheese wheels are moved to Palazzo Rusticucci where they age, or mature, for four to five months in simple, open-air plastic crates. They are then put inside cloth bags and taken down the steps into the cellar to be placed inside one of the two caves.

Formed in the 17th century, the caves originally served as a refrigerator for a Cardinal’s summer home. Ice from the winter was carried inside to keep salumi, vino, olio and prosciutto preserved.

“Now the caves are used to mature the cheeses,” Beltrami’s daughter Cristiana said. Both caves run about 13 feet deep and maintain a temperature of 50 to 60 degrees.

The cave entrance is sealed with cement to prevent oxygen from reaching the cheese – and allow it to “sleep” for 100 days. On the last Sunday of November, Vittorio is not so gentle in waking the cheese – using a hammer to unceremoniously break the cement seal.

The cheese is carried back upstairs to rest in plastic crates again for 100 days before it is ready for sale.

Formaggio di Fossa is only produced once a year to allow the caves to breathe during the other months, Cristiana explained.

“Vittorio is an artist of food,” said Virginio Baldelli, owner of Osteria Da Gustin in Bargni. The restaurant is always offering a selection of the Beltrami’s cheeses for customers to taste.

“His cheese reflects perfectly the way we think about food,” Baldelli said. “It tastes like messages from the land, from Le Marche.”

After a full year of aging the pecorino, Gastronomia Beltrami is left with a golden-colored sharp cheese that Vittorio calls, the perfect example of Retroinnovazione. 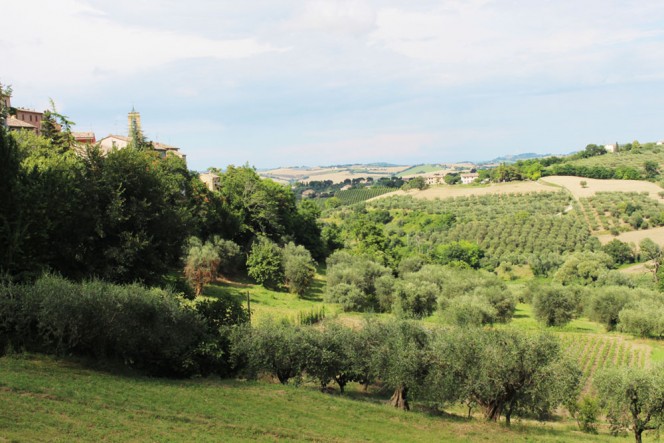 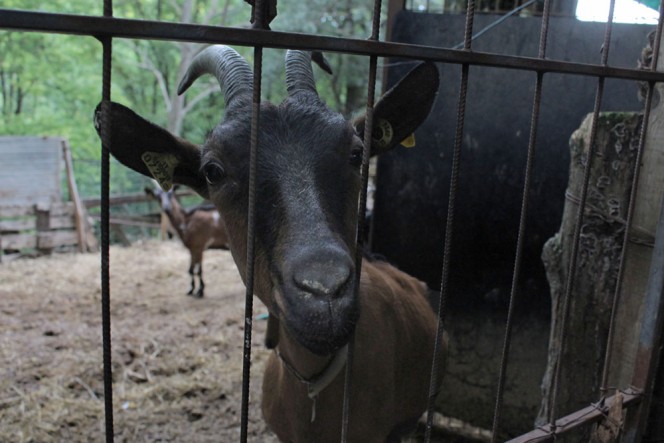 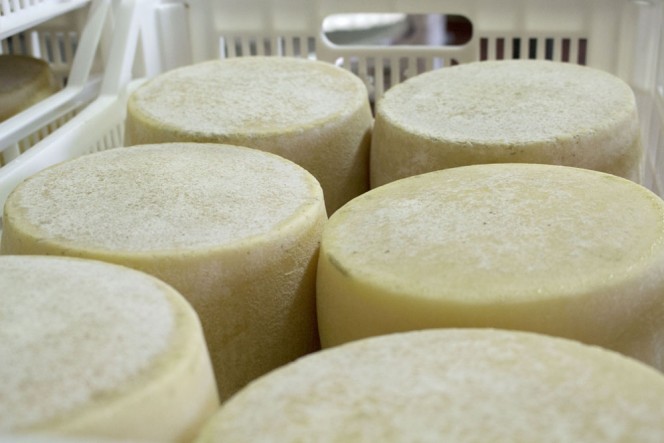 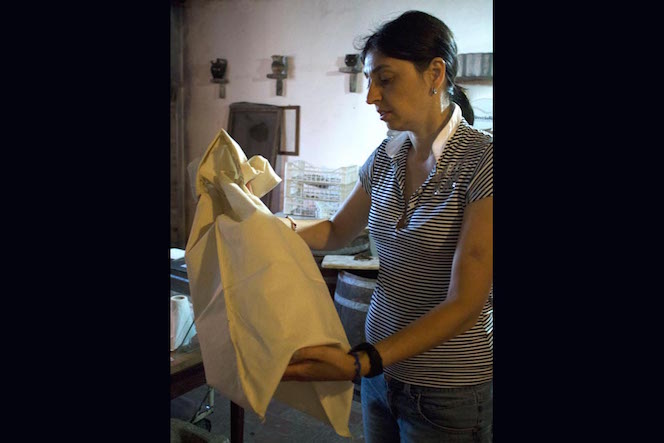 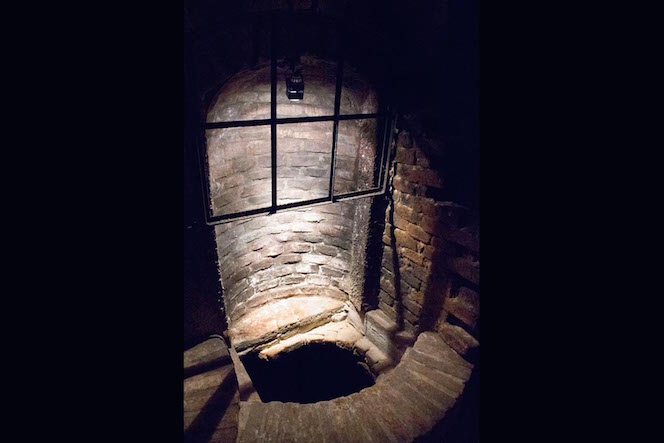 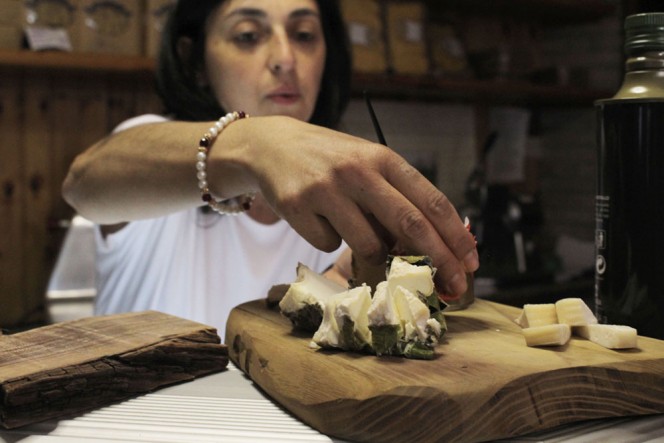 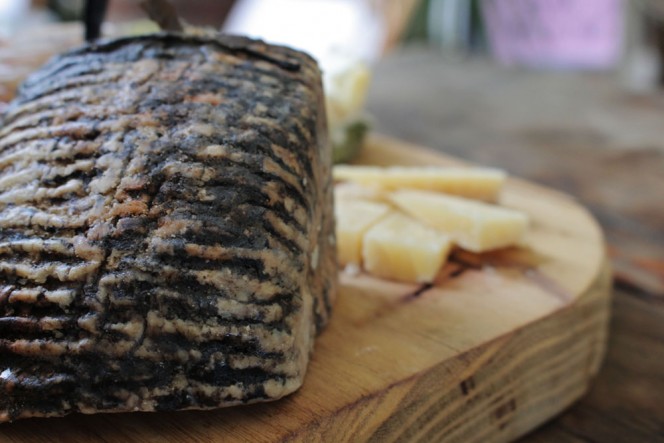 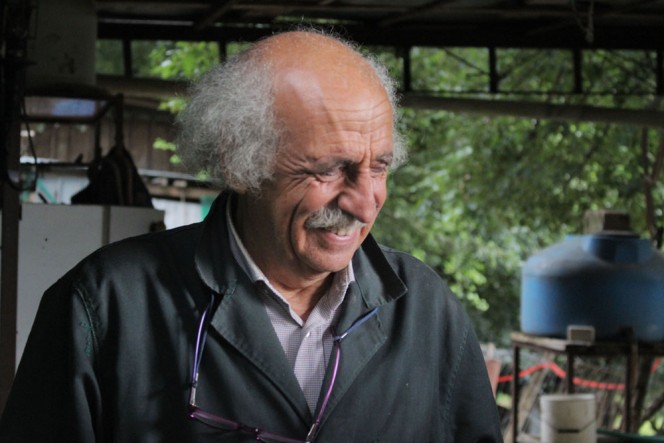