“Attenti ai cani”—beware of the dogs—reads a sign on the narrow dirt road that leads to Varea le Coste, a bed-and-breakfast two kilometers outside Urbino, Italy. My companion and I can hear dogs, many of them, barking in the distance. A little fearfully, we drive up to the two-story brick house, on acres of green grass, where owner Vittorio Scalbi awaits us. He smiles brightly, takes off his hat—which reads “Trainer, Top Breeder”—and holds out his hand to introduce himself, saying “Come meet the dogs.”

We walk down a hill behind the bed-and-breakfast. The barking is louder, and a kennel comes into view. Then Scalbi opens the kennel gate, and it becomes clear there is nothing to beware. These dogs are his best friends. A dozen animals jump up and down, each hoping to be chosen. Ringo, a black-and-white pointer, runs out of the gate and, with joy in his eyes, leaps on Scalbi to deliver a wet kiss.

Like others in these parts, Scalbi is a truffle-dog trainer. He teaches dogs to find and retrieve the elusive mushroom used in Marche cuisine. But unlike other trainers, he doesn’t sell his dogs. Instead, he keeps them for life, falling in love with each and every one. 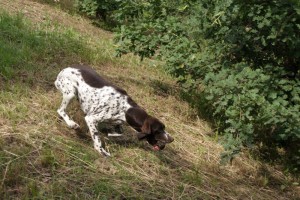 Luna, a Branco-Pointer mix, retrieves a truffle from the nearby woods. Luna is currently being trained by owner, Vittorio Scalbi.

The Marche region is known for a precious delicacy: truffles. The area around Acqualagna, a town 18 kilometers south of Urbino, produces the second largest quantity of truffles in Italy, after the region near Alba, in the northwestern part of the country.

“Truffles are special in this region because they are so rare elsewhere,” says Monia Constantini, owner of Tartufi Antiche Bontà, a store in Urbino that sells truffles and other Marche specialties and provides tastings. She explains that a truffle is a fungus that grows under the soil, drawing food from the roots of other plants. There are two kinds of truffles, white and black. Black truffles are in season from January to August, and are less rare than white truffles, making them less expensive. On average, black truffles cost 250 euro per kilogram. White truffles are in season from October to December, and their price each year depends on the weather. If it rains more in the summer, more white truffles will grow, dropping the price. In the Marche, says Constantini, these fungi are added to pasta sauce or soup, melted into gnocchi, or topped on an omelet or beef, adding a pungent, earthy flavor with a hint of garlic and mushroom.

“Dogs are like people, some are more friendly than others,” says Scalbi, but one is never better than another in his mind.

Finding this delicacy is not an easy job, however. Pigs and dogs, known for their exceptional sense of smell, are often trained to hunt for truffles in Italy. In the United States, however, only about 15 percent of truffles are found with dogs, says Alana McGee, founder of the Truffle Dog Company located in Seattle, Washington, and Portland, Oregon. More often, says McGee, American hunters rake up truffles while they are still immature and not fully aromatic. Hunters in the Marche work strictly with dogs, says Constantini, who buys the truffles for her store directly from hunters in the area. These dogs could be sold for up to $10,000 in the United States, according to McGee.

Growing up in the countryside around Urbino, Scalbi began training dogs to hunt game, such as small birds. When he was a teenager, he hunted animals with friends, which then turned into hunting truffles as well. Training a dog to hunt animals comes first, Scalbi explains, followed by training it to hunt truffles.

Many dog trainers, Scalbi says, do not feed their dogs prior to a truffle hunt. This will make them hungry enough to want to find the truffle, knowing they will receive food when the fungus is retrieved. Scalbi does not believe in this type of training. He starts training dogs at 8 months, feeding them meat mixed with dog food from the beginning. He then spreads the meat mixture onto a truffle and hides the truffle under the soil next to his home, down the road from his bed-and-breakfast. In the beginning, many dogs eat the truffle instead of returning with it. However, Scalbi trains each dog to return with the fungi by rewarding the dogs with a treat for their accomplishments. The treat is a type of meat the dog is not usually fed, but something better, such as salami. The dog will slowly begin to associate the smell of meat with the smell of a truffle, in order to find the fungi in the woods. Scalbi helps the dogs in training locate the truffles by pointing them in the right direction. They are fully trained when they can finally retrieve a truffle on their own. However, he continues to train them throughout their lives, and occasionally still treats them to hunting animals for fun.

By training one hour each day, a dog can be ready to hunt truffles in only 15 days, says Scalbi. Any dog can hunt for truffles, he says. In fact, McGee, the American trainer, has even taught a Chihuahua and a Yorkie to find the fungi. However, Scalbi prefers hound dogs, because of their keen sense of smell and ability to hunt small animals. But the best hunting dogs aren’t always the best truffle hunters. “The better a dog is at hunting animals, the longer it will take me to train,” Scalbi says. “Good hunting dogs get more distracted in the field, as they look for animals instead of truffles.”

After training the dogs to detect truffles on their own, Scalbi heads to the woods near Urbino to hunt for real truffles. Because of the pricey cost of truffles, most hunters sell their findings. Vittorio Scalbi does not. He is not in it for the money; it is simply fun and relaxing for him, he explains. He gives his findings as gifts to family and friends instead. 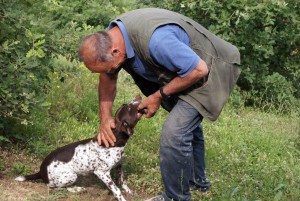 Vittorio Scalbi gives Luna a warm congratulations, for finding a truffle in the woods on her own.

Each month, Scalbi meets fellow dog trainers at a nearby park. The trainers hold a competition to see whose dog will retrieve hidden truffles the fastest. Scalbi has won this competition multiple times, even at a national level in 2011. “There is often a prize, such as a trophy or a ham. But I don’t do it for the prize, I do it for the love of the game,” he says, nevertheless proudly pointing to the dozens of trophies that line the walls of his home. After all this time, truffle hunting is still a hobby, and a way for Scalbi to connect with his best friends, his dogs.

Back outside the kennel, Ringo sprints up the hill, excited to find the truffles Scalbi has hidden, knowing he will earn a treat. Scalbi follows his companion. They arrive at a small field, where multiple truffles are hidden under the soil around trees. The black-and-white spotted hunter sniffs through the grass, digging up nothing but dirt this time around. Scalbi yells, “Vai, vai, vai!”—“Go, go, go!”—and points Ringo in the direction of the truffles, giving him encouragement. Ringo finally detects the prize, digs it up, and grasps the black truffle between his teeth. He turns back around to spot his owner, who is holding a piece of salami in the air. Ringo jumps on Scalbi to reach the salami, trading the fungus for the treat. Truffle by truffle, Ringo impresses his owner, earning his favorite meat. Scalbi watches as Ringo continues to sniff through the field, bringing back truffles with ease. Each time his dog returns with a truffle, Scalbi leans down to pet him, receiving more wet kisses.

The two work as a team, like old friends finding truffles together. Scalbi gives directions while Ringo listens, and follows. “If you are not friends, you cannot work together,” Scalbi says. The relationship the two have formed has made hunting truffles easy. “You cannot have an enemy that works with you,” says Scalbi, describing his friendship with Ringo and the dozens of other dogs he has worked with. He has never had a favorite dog, because picking one would be too hard. He says, “Dogs are like people, some are more friendly than others,” but one is never better than another, in his mind.

Later, as we drive out the dirt road, I turn around in my seat to look back at Scalbi who waves goodbye with his best friend, Ringo, by his side. “Attenti ai cani” was nothing more than a joke, because there was nothing to beware. 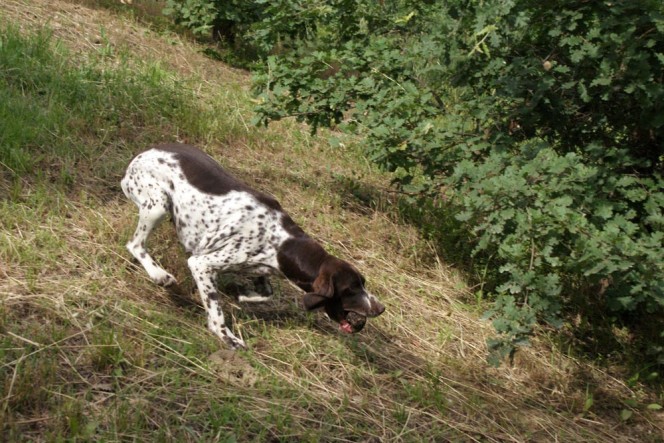 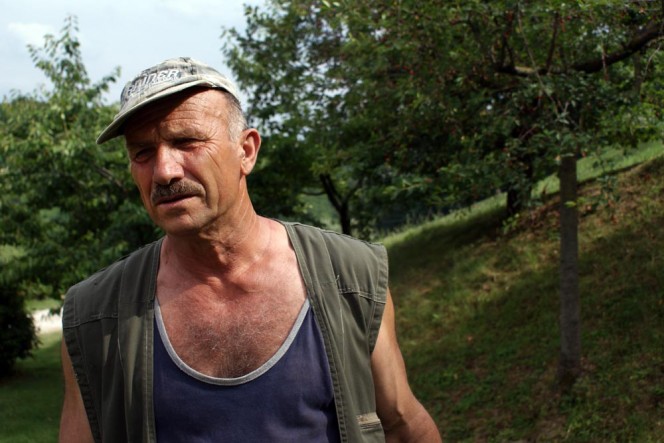 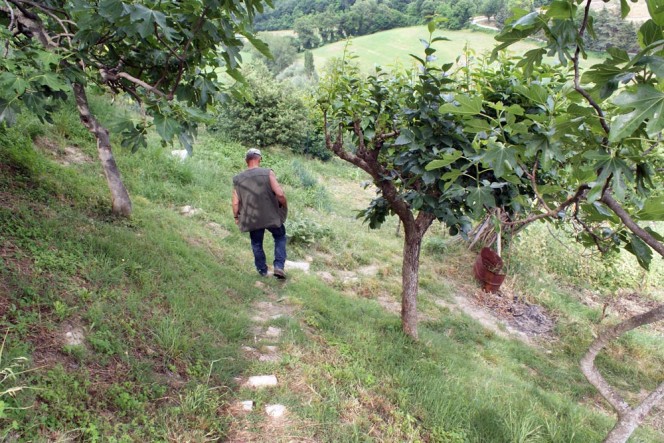 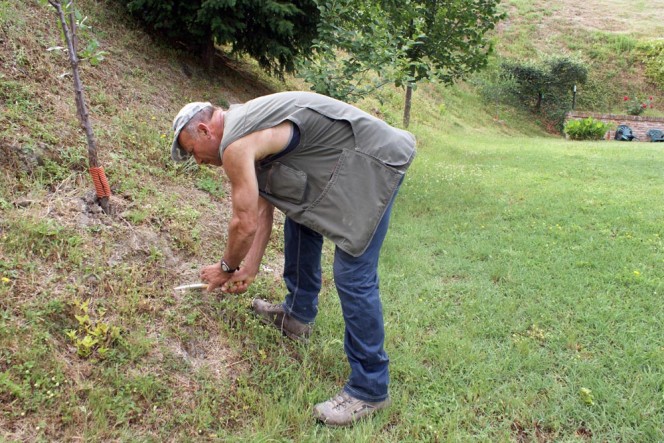 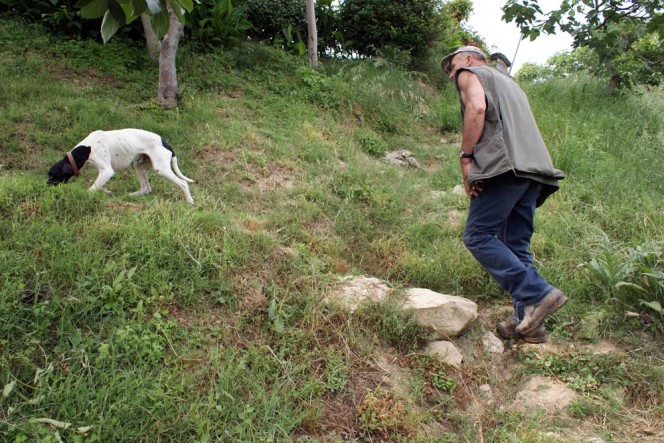 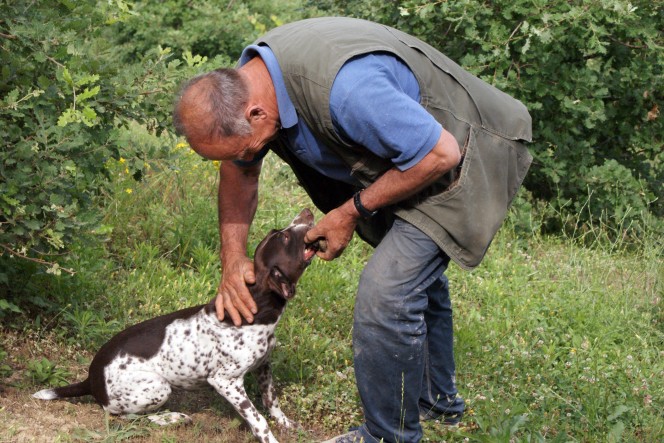 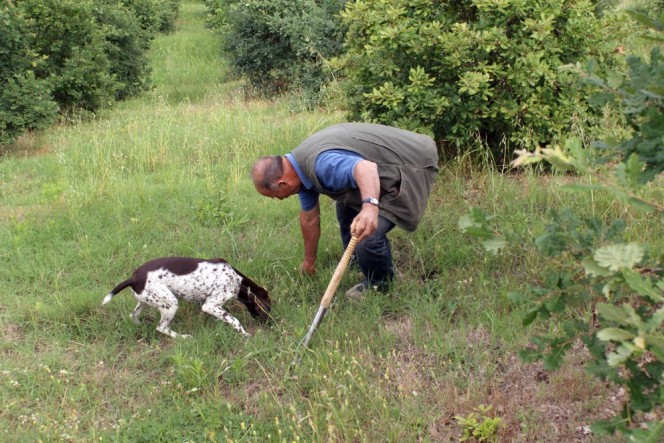 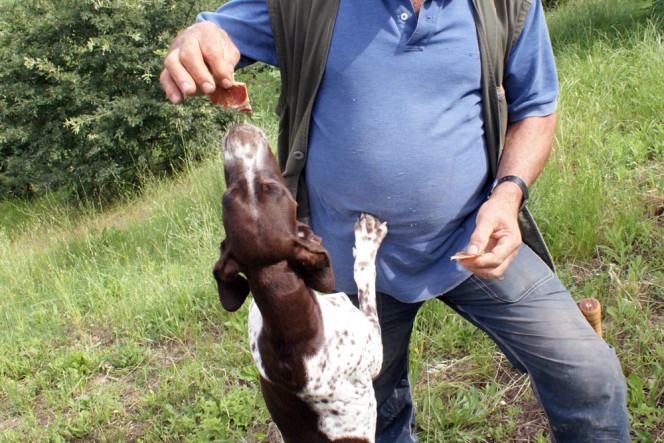