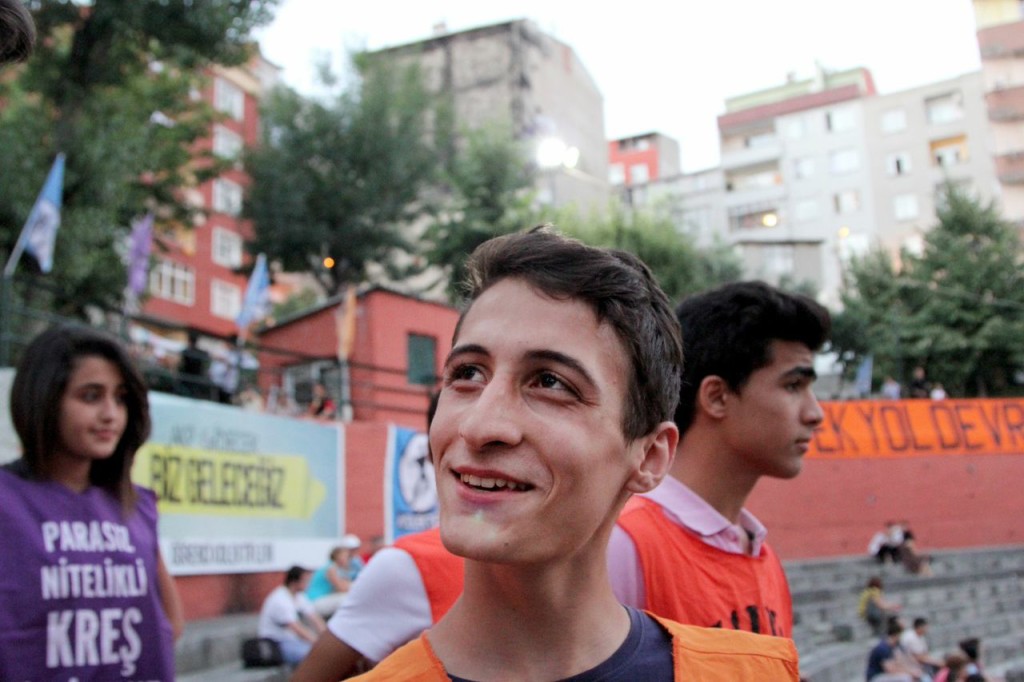 Alican Açanal, 16, here pictured at a children’s benefit concert in Okmeydanı, was arrested in March while protesting an election rally in the neighborhood. Photo by Austin Montgomery

With its millions of residents from different religious, ethnic and political backgrounds, Istanbul is an epicenter of activism within Turkey. One neighborhood, however, stands out as the ground zero for mobilization against political and cultural oppression: Okmeydanı.

After two bystanders were killed in violent incidents here, a magnifying glass was placed over this neighborhood on the Bosphorus’ European side. The media tends to fixate on the violent protests, and photographs often show masked young men brandishing shotguns or hurling Molotov cocktails at the police. But these reports ignore Okmeydanı’s lower to middle class unity, tenacity for human rights and public political vision—all of which make Okmeydanı one of the most vibrant places in the city.

Okmeydanı is home to concentrations of Alevi and Kurdish minorities, both of which have often fought against the Turkish state.

Multimedia journalist Rachel Aston interviewed a student activist with Young Hope, a group that pushes for free education, and the right to study in one’s native language:

A Leftist-Religious Divide, Deepened by Tragedy

“The divisions in Okmeydanı are key to understanding the neighborhood,” Muzaffer Kaya, a history professor at Işik University in Istanbul, said. “The political divisions here began in the 1970’s. The divide between conservatives and leftists drew people apart. Invisible borderlines were drawn. This sort of division happened all over Istanbul.”

Alevism, an offshoot of Shia Islam that espouses Sufi beliefs, is not recognized by the ruling Sunni-led governing body, the Justice and Development Party (AKP). Alevis have suffered from hiring biases, disrespect for their religious activities, and lack of representation within the ruling party.

Kaya says Alevism has always been aligned with the left, due to some of their more progressive religious practices: Alevi men and women can pray together, women do not wear headscarves and there is no five-times daily prayer schedule. Younger generations are not religious, and only identify as Alevi in a cultural way.

The Alevi movement was mobilized further in the early 1990’s following the Sivas massacre Sivas massacre in which 37 people died; all but two of the dead were Alevi intellectuals and artists.

“Sivas was a place where Alevi and Sunni coexisted,” Kaya said. In 1993, at a hotel in town, “there was a commemoration of poet, Sultan Abdal, one of the most prominent Alevi intellectual, religious leaders. Aziz Nesin, a critic of Islam, had just translated Salman Rushdie’s ‘The Satanic Verses.’ There was a strong Islamist organization in the city, and they reacted to the translation. The protestors broke through the police barricades and burned down the hotel.”

Kaya says this incident compelled even more people to become politically active. Alevis built cemevis, or places of worship to practice in public. Before the 1990’s, these ceremonies were performed at home, but after the massacre, people wanted to express themselves openly, which led to the creation of privately-funded cemevis. Today, cemevis still receive no funding from the government. 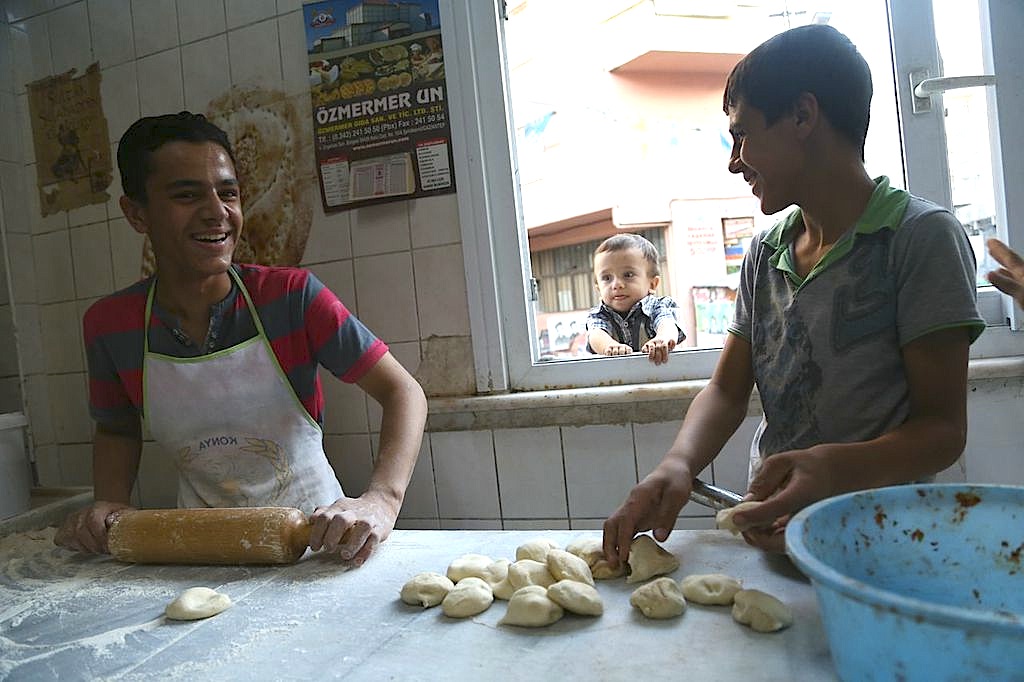 Similarly, the Kurdish question has been one of great debate since the early 1980’s. Kurds, who historically come from Eastern Turkey and can be Sunni or Alevi, make up nearly 16 percent of the country, and have struggled against the narrow state definition of what it means to be Turkish. During the volatile period following a brutal military coup that targeted leftists, Kurdish literature and music was banned. From 1980 to 1991 the Kurdish language was also outlawed. This repression led to the formation of the militant group, the Kurdish Workers Party (PKK), which began to fight for the independence of the Kurdish minority, and perpetrated multiple bombings and assassinations throughout the late 80’s and 90’s.

“The Alevi and Kurdish question is one of a struggle, and we don’t know how it will end,” Kaya said. “The success of the Alevi and Kurdish struggle is based on an alliance with other groups including the working class, LGBT community and even democratic Islamists.”

A House of Activism

In Okmeydanı, one common space for all of these groups to share is the halkevi, or “people’s house.” With over 80 branches throughout Turkey, the halkevleri are meant to be umbrella organizations that unite activist groups. They seek to promote human rights, free education and health care, while offering civic programs and classes.

The Okmeydanı branch can’t afford to pay its municipal bills, said Ali Coşkun, a lawyer and appointed delegate for the Okmeydanı branch. Laughing, he gestured at the bulletin board under portraits of Lenin and Marx, adjacent to a stoic Che Guevara mosaic, where months-old electric and water bills covered the corkboard.

“We aren’t publically funded,” he said. “We rely on our membership to pay for our programs. We sell tickets to the events we host, some of the kids here even sell water, and somehow we manage.”

The center is important because it educates the youth in Okmeydanı through scientific knowledge, rather than through theology, he said.

“We want to educate people against political Islam, and the problems it causes for everyone in Turkey,” Coşkun said. “We want to defend the people against the state. I am advocating against neoliberalism. The [halkevi] here is organized around fighting to bring democracy, justice and equality to the people in Okmeydanı.”

Coşkun acknowledged that he feels constrained by the constitution, and struggles against government rulings to formulate strong case arguments.

“Nothing works in conjunction with the constitution and the way laws are implemented in Turkey,” he said. “If a law isn’t in favor of the government, they change it. It is always like this in Turkey.”

He stressed that, although he is a lawyer, he feels his identity as an activist eclipses his legal obligations.

“If I were only a lawyer, I would be restrained by the system,” he explained. “If I stayed within the system, I would remain blind. Being restrained would hinder me from being able to think unconventionally.”

Activism is in fact normal in Okmeydanı—even among teenagers.

Rather than focusing on chasing girls or getting a car, Devran Çelik, 17, and Alican Açanal, 16, try to empower fellow high school students as part of Young Hope, an activist group focused on changing the educational system in Turkey.

For Çelik, being an activist was part of his upbringing. His parents were politically active while they were in college.

Açanal’s parents are less enthusiastic about his activism, as his older sister was jailed for three years for protesting in favor of expanded Kurdish rights.

“Sticking together is crucial, because the state is very powerful, he said. “When people stick together, the state will realize it is very hard to divide everyone. Unity terrifies the government.” 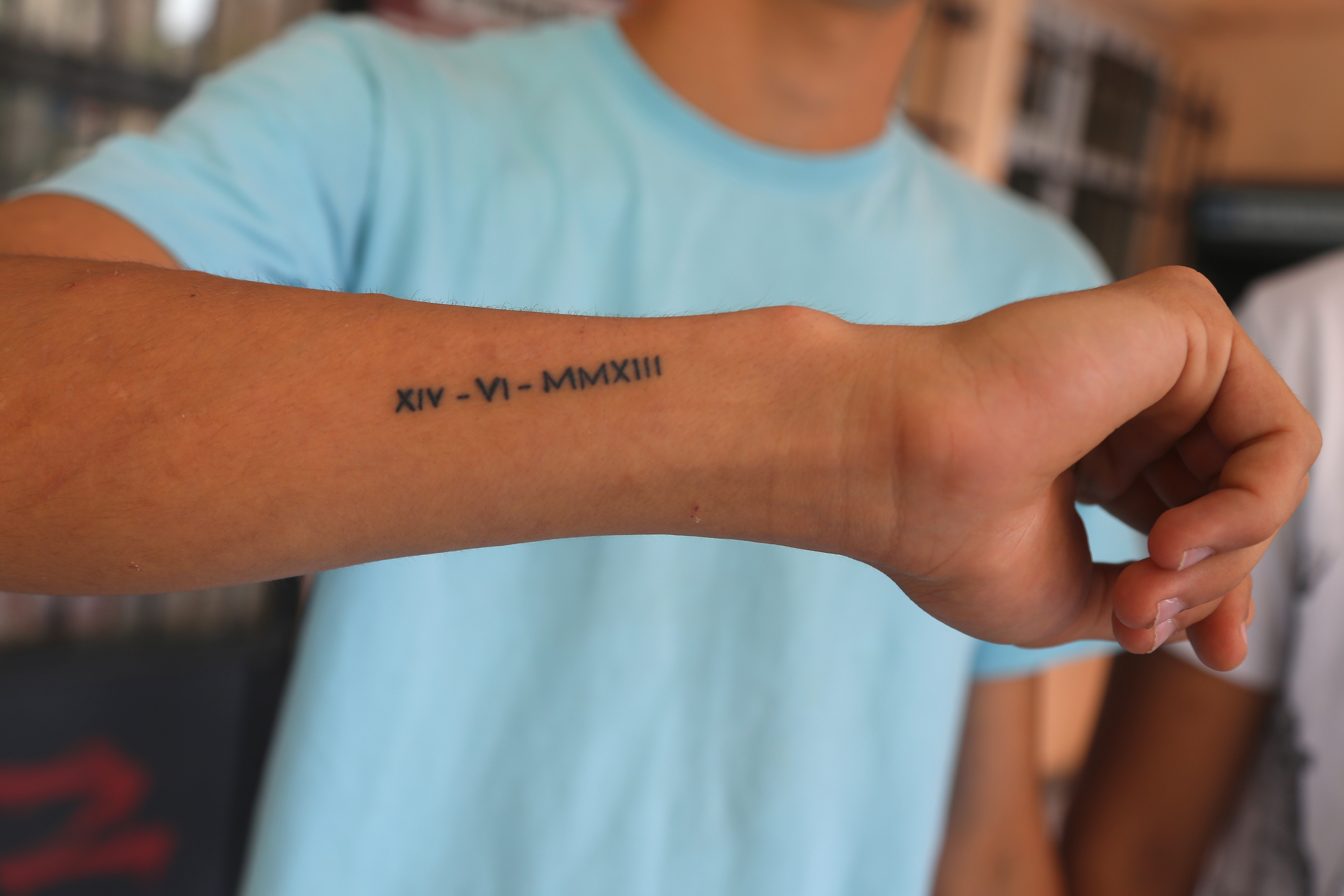 Alicon Açainac has tattooed his arm with the date 15­-year-­old Berkin Elvan was shot in the head with a tear gas canister (Elvan later died, after spending 269­ days in a coma). Photo by Rachel Aston

After plans were announced to redevelop one of the last remaining green spaces in Istanbul, Gezi Park, protests led by Taksim Solidarity in May 2013 erupted in Istanbul, and across Turkey. Hundreds of thousands of people from all different backgrounds came together to fight for basic freedoms. During the demonstrations, police detained over a thousand activists and lawyers.

“The state arrested me early in the morning and raided my house,” Coşkun said. “I was using my democratic right to protest, and I was labeled a terrorist. By advocating for basic human rights, I was punished.

Plans to turn the park into a shopping mall were halted after two weeks of intense clashes with police, but demonstrations continued across Istanbul. Fifteen-year-old Berkin Elvan, now seen as a public hero by many, was out buying bread in Okmeydanı during a June 2013 protest, and was hit in the head by a tear gas canister. He died on March 11, 2014, after 269 days in a coma.

On May 22, 2014, Uğur Kurt, a cleaner and resident of Okmeydanı, died after being shot by police while attending a funeral near where a protest over the May 13 Soma mining disaster was occurring. He was shot after a police convoy was attacked with Molotov cocktails, and officers responded with live-fire ammunition.

“I was there when Uğur Kurt was killed,” Çelik said. “I am not afraid of the police, because I grew up here; [the police] are always around. So its not fear. Their presence has become part of Okmeydanı.”

Following police raids on May 24, 38 activists were detained, after police allegedly found an undisclosed number of shotguns, more than 30 Molotov cocktails, explosive materials and fireworks in the neighborhood.

“In Okmeydanı, the state uses Special Forces and helicopters to arrest people,” Coşkun said. “Their reaction there is much more intense and far worse than when I was arrested. I think the state considers everyone in Okmeydani a terrorist.”

Alican Açanal and a small group of activists were detained in March after throwing eggs at an election rally in Okmeydanı near where Berkin Elvan was shot. Shortly after being arrested, Açanal said, the police sexually harassed two of the detained activists.

“Two of my friends volunteered to go with the officers,” Açanal said. “After a while we realized they weren’t coming back, so we got suspicious. When they came back they told us the officers force-fed them raw eggs, and that the officers harassed them by grabbing their genitals.”

As in other parts of Istanbul, the government is proposing plans for massive redevelopment projects in Okmeydanı. Beyoglu Mayor Ahmet Misbah Demircan recently said he hoped the neighborhood would become the Champs Elysees of Istanbul. In a video that would make any sci-fi fan happy, the government released CGI layouts of what he exactly meant by that.

Environmental lawyers, Coşkun among them, plan to sue the municipality to try to halt the project.

“The decision to redevelop this neighborhood will impact over 100,000 people,” he said. “The state will demolish the buildings. The people who live in Okmeydanı now could never afford to live in luxury apartments. Gentrification leaves no room for the poor.”

It is clear why Coşkun and others are so passionate about Okmeydanı. There is real character in the dilapidated apartments and countless oddball shops selling anything from copper wire to bread. A sense of cohesion through political necessity pervades the streets. The area might look ominous at first—with anti-government slogans scrawled on nearly every building, and posters calling for protests—but there is a spirit in Okmeydani that could lead the political discussion within the coming months as this redevelopment battle, and others around Turkey, persist.

“The neighborhood has a tendency to resist; it’s not hard to see why we are part of Okmeydanı,” Coşkun said. “We are political. Its commonplace here to fight for something; we wouldn’t live any other way.”