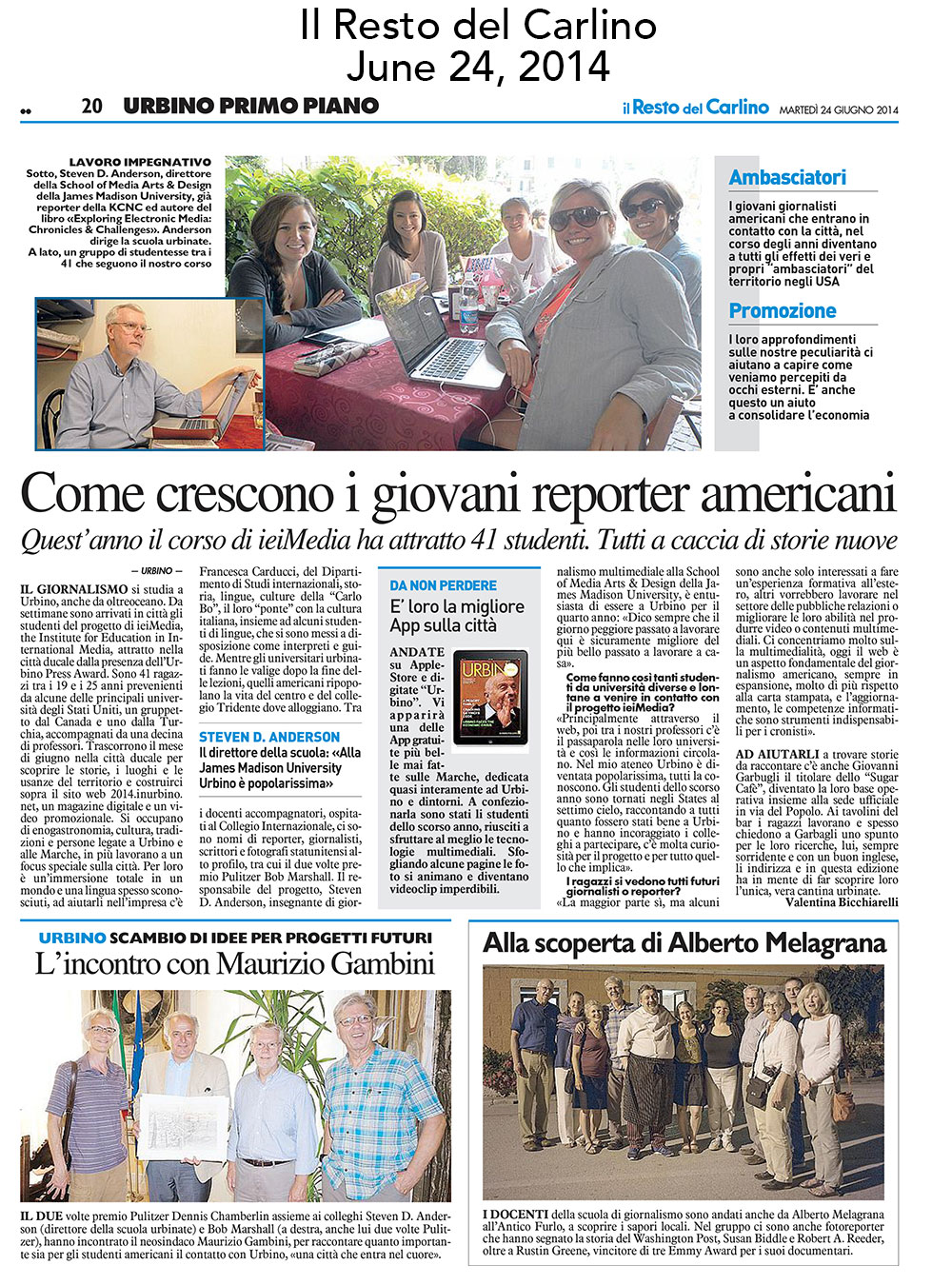 They studied Journalism in Urbino, even from overseas. For weeks they arrived in town – the students of the ieiMedia project, the Institute for Education in International Media, attracted to the Ducal city by the presence of the Urbino Press Award.

There are 41 young people between 19 and 25 years from some of the leading universities in the United States, a small group from Canada and one from Turkey, accompanied by a dozen professors.

They spent the month of June in the Ducal city to discover the stories, places and traditions of the territory and build the 2014 website, projects.ieimedia.com/2014urbino, a digital magazine and a promotional video. Dealing with food and wine, culture, traditions and people linked to Urbino and the Marches, more work in a special focus on the city.

For them is a total immersion in a world and a language often unknown, helping them in the enterprise there is Francesca Carducci, of the Department of international studies, history, languages, cultures of “Carlo Bo”, their “bridge” with Italian culture, along with some students of languages, which are made available as interpreters and guides. While the University students make suitcases Urbina after the end of the lessons, those Americans coming back to the life of the College and Trident Centre where they are staying.

Tutors and escorts, hosted in the International College, there are names of reporters, journalists, writers and U.S. high-profile photographers, including two-time Pulitzer Prize winner Bob Marshall. The project manager, Steven D. Anderson, Journalism teacher of Media Arts & Design at James Madison University, is thrilled to be in Urbino for the fourth year: “I always say that the worst day at work here is definitely better than best day at work at home.”

How do so many students from different universities fram afar come into contact with the ieiMedia project? «Primarily via the web, then there is word of mouth with professors in their universities and information circulates.

“In my University, Urbino has become hugely popular, everyone knows about it. Students from last year are back stateside in seventh heaven, telling everyone what they were good at Urbino and encouraged colleagues to participate. There is a lot of curiosity for the project and all that that implies.”

Are the young people you see all future journalists or reporters? “Most Yes, but some are just interested in making a training experience abroad, others would like to work in the field of public relations or improve their skills in producing video or multimedia content. We focus a lot on multimedia. Today’s web is a fundamental aspect of American journalism, ever-expanding, much more than the print media, and upgrading e-skills are indispensable tools for reporters”.

To help you find stories to tell, there is also Giovanni Garbugli, the proprietor of “Sugar Cafe” which became their base of operations along with the registered office in via del Popolo. At the tables of the bar the guys work and often ask Garbugli as a starting point for their research, him, always smiling and with good English, and directs them in this edition has in mind to discover their the only real cellar of Urbino.
Valentina Bicchiarelli

SIDEBAR (Top Right)
Ambassadors
The young journalists Americans who come into contact with the city, in over the years become in all respects true and its “ambassadors” of the U.S. territory.

Promotion
Their insights about our peculiarities there help to understand how we are received by external eyes. It is also this aid to strengthen the economy.

FEATURE BOX
Not to Be Missed
It is their best App on the city
Go to the Apple Store and enter “Urbino”.
There will appear one of the free apps, the most beautiful ever made on the Marches, dedicated almost entirely to Urbino and surroundings. The package produced by students last year who managed to make the most of the technologies media. Browsing some pages photos come alive and become must-see video clips.

PHOTO AND CAPTION (Bottom Left)
Urbino Exchange of Ideas for Future Projects
The meeting with Maurizio Gambini
Two-time Pulitzer Prize winner Dennis Chamberlin together colleagues Steven D. Anderson (Director of the school of Urbino) and Bob Marshall (right, also a two-time Pulitzer), they met the Mayor Maurizio Gambini, to tell how important for American students contact with Urbino, “a city that enters the heart”.

PHOTO AND CAPTION (Bottom Right)
Discovering Alberto Melagrana
The teachers of the school of journalism are gone even from Alberto Melagrana the Antico Furlo, discover the local flavors. In the group there are also photographers that have marked the history of the Washington Post, Susan Biddle and Robert A.Reeder, In addition to Rustin Greene, winner of three Emmy Awards for his documentaries. 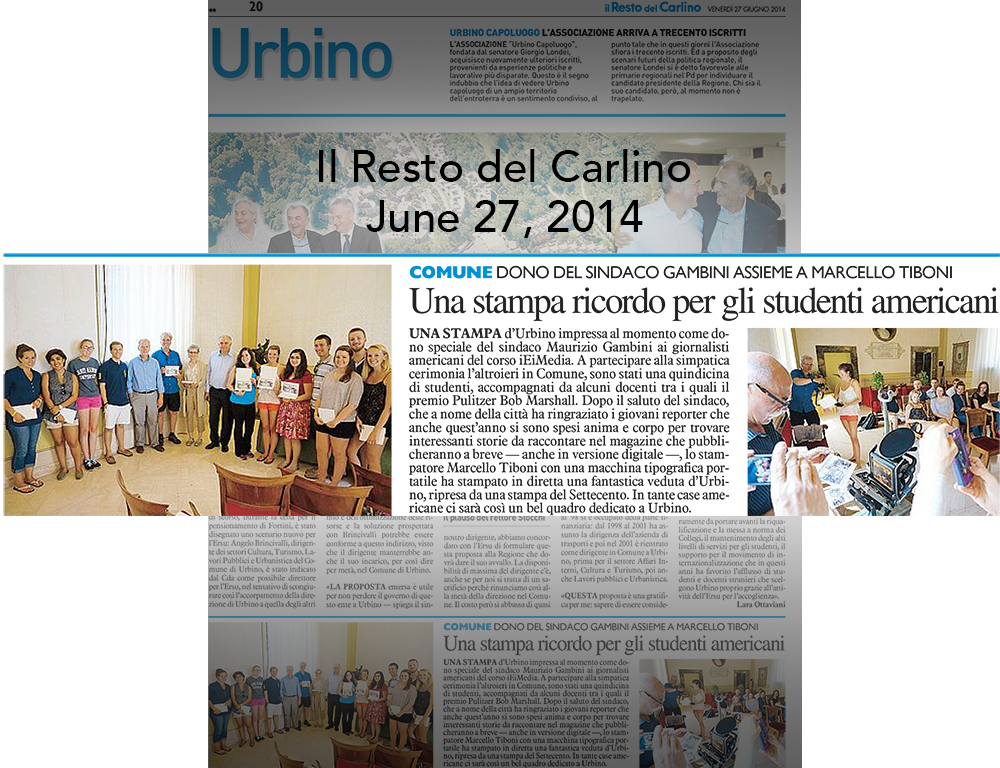 UNASTAMPAd’ imprinted upon Urbino as a gift of Mayor Maurice Gambini to special reporters, Americans, of the course of iEiMedia. To join the fun ceremony the day before yesterday, were about fifteen of students, accompanied by some teachers, including the Pulitzer Prize winner Bob Marshall.

After the greetings of the Mayor, who on behalf of the town thanked the young reporters who this year spent and soul to find interesting stories to tell in a magazine that will be published in short — as well as a digital version, the printer Marcello Tiboni with a portable printing press printed live a fantastic view of Urbino, taken from a print of the eighteenth century. In many American homes there will be a beautiful picture dedicated to Urbino. 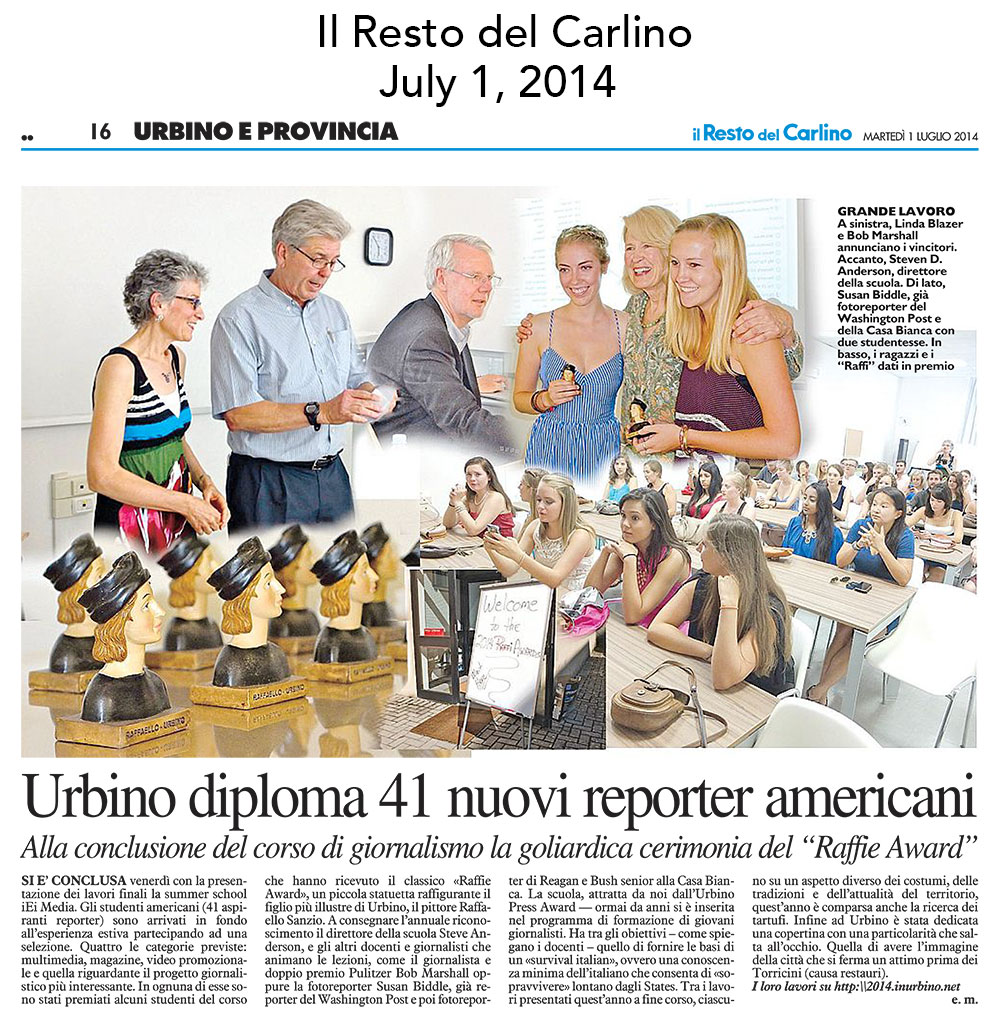 TEXT
Urbino diploma 41 new American reporter
At the end of the journalism course ceremony was the “Raffie Award” presentation of final work for the summer school iEiMedia. American students (41 would-be reporters) came at the end of the summer experience by participating in a selection.

Four categories were awarded: multimedia, magazine, promotional videos and on the most interesting journalism project. In each of them were awarded some students who received the classic “Raffie Award,” a small statue depicting the most illustrious son of Urbino, the painter Raffaello Sanzio.

Awarding the annual recognitions was the school director Steve Anderson, and other professors and journalists who enliven the lessons, such as the double Pulitzer Prize-winning journalist Bob Marshall or photojournalist Susan Biddle, former Washington Post reporter and photojournalist of Reagan and Bush senior at the White House.

The school, attracted to us for the Urbino Press Award — for years now has been included in the training program for young journalists. Among its objectives – how teachers explain – to provide the basis for a “survival English”, i.e. a minimum knowledge of Italian to ‘survive’ away from the States.

Among the works presented this year at the end of the course, each on a different aspect of the customs, traditions and current affairs of the territory, this year it appeared the search for truffles.

Finally in Urbino has been dedicated a cover with a special feature that jumps to the eye. To have the image of the city that stops a moment before Tan (because restorations). Their works over http://projects.ieimedia.com/2014urbino
e. m.