URBINO, Italy — Veli Ljatifovski looked out across Ponte Armellina, a housing development he has lived in for the last 20 years. He saw buildings spotted by mold from the corrosive effects of humidity, open sewers spilling into the streets, and derelict cars and mattresses strewn across weed-filled front lawns.

“It wasn’t like this before,” said Ljatifovski, 44, who arrived here in 1995 as a refugee from Yugoslavia after escaping war in his homeland. Ljatifovski, one of the oldest residents and homeowners in Ponte Armellina, helped found the community of immigrants that have made the neighborhood home.

“It was like paradise, clean, with good buildings,” he said. 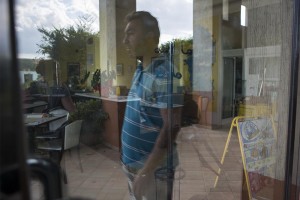 While listed inside the borders of Urbino, one of the most beautifully preserved Renaissance cities, Ponte Armellina is seven miles from the city’s historic center. It is a community formed by documented immigrants who moved to Italy in the mid-90s to chase the dream of a better life. As years passed and the buildings decayed, Ponte Armellina residents faced precarious living conditions and little attention from local authorities. Residents inside the walled city and local media stigmatized the community, labeling it “Urbino 2.”

Since 2009, the municipalities of Urbino and Petriano have been planning to rebuild the neighborhood, believing that by improving the physical decay, social problems will be addressed.

But residents are skeptical and confused. Before the redevelopment occurs, they have a number of worrisome options. Those who own their apartment would have to sell them at huge losses and leave. Those who are renting from private owners could have to move if their apartments are sold. Those in public housing, the largest group, would be moved into other subsidized housing during the rehabilitation. A small group of residents who occupied the apartments without paying rent will be evicted.

The €7.9 million ($8.8 million) urban redevelopment will be funded by the region. The project is meant to build bigger and environmentally friendly affordable housing, expand and create public services, improve urban landscape and sport facilities, and integrate more non-immigrant Italian families into the neighborhood.

According to engineer and assessor of city planning Roberto Cioppi, the project entails of purchasing 45 apartments as small as 320 square feet in buildings owned by the Regional Agency for Public Housing (ERAP) for €7,000 to €8,000 ($7,815 to $8,931) each. They will be turned into 26 apartments of 756 square feet each.

“The goal of this project is the urban regeneration of the area,” said Cioppi.

When Ljatifovski moved to Ponte Armellina, the neighborhood was a failed student housing project built by a private company in 1990. Parents bought many of the units, but students soon realized they were too far from the campus for an easy commute. The building soon became vacant.

Ljatifovski purchased his apartment from a Neapolitan family for €75,000 ($83,678) when the economy was good and it was easier to obtain a mortgage. His apartment is located in one of the two buildings that will be rebuilt in the redevelopment. As a private owner, Ljatifovski said he has been offered to sell his apartment for €25,000 ($27,903), due to a heavy devaluation of real estate in the area, or to pay a negotiated lease if he wishes to stay in a remodeled apartment.

“We don’t agree with them because we suffered to pay for this apartment,” said Ljatifovski.

Eduardo Barberis, a sociology professor at the University of Urbino and expert in Italian immigration policies, did a quantitative analysis of population, risks and social needs in Ponte Armellina in 2011 along with a team of students. The study, which was presented to the municipalities, revealed 20 percent of Ponte Armellina’s 600 residents owned their homes.

Ljatifovski remembers that a few years back a resolution of the region labelled his neighborhood the worst area in Le Marche. “If people don’t come here they won’t see what the reality is,” said Ljatifovski. “We are not animals.”

Cioppi said that more funding will be pursued to increase the offers to homeowners unhappy with the current price.

Urbino Mayor Maurizio Gambini said the reason for the devaluation of property in Ponte Armellina is that Italians don’t wish to move into an area heavily inhabited by foreigners and that the quality of the houses is not that good.

“We are working in spite of the fact that many people say we shouldn’t follow through with the project and use this money for the redevelopment,” said Gambini. “These are Italians who don’t want extra-communitarians (people not from the European Union).”

The majority of adult residents in Ponte Armellina migrated from Northern Africa and The Balkans. Barberis’ study found that 60 percent of the residents are Moroccan, while 25 percent are Macedonian.

Many residents are skeptical of the outcome because of previous broken promises.

“There are many other things [problems] we told them about, but no one has done anything yet. Now they told us to keep calm, that they have money and will start building,” he said. “They’ve been talking about this for six years.” 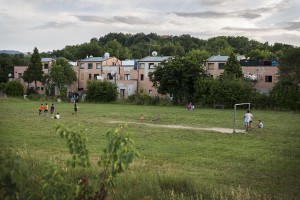 The soccer field is a meeting place for children. Two tennis courts and a playground will be built next to it as part of the redevelopment.

Cioppi said the project will start around March 2016 and will take one year to complete.

Resident Abdel Maler, of Morocco, said that it would be a great benefit for everyone if change comes to the neighborhood. He’s been living in Ponte Armellina since 1996.

Maler, who is unemployed and lives in an apartment owned by the court, does not need to pay rent because of his employment status.

“It belonged to a private owner, then they failed to pay their mortgage, so the court took the whole thing.”

According to ERAP, minimum rent is €50 to €100 ($56 to $112) and residents must qualify based on income. The redevelopment will not affect those who legally live in ERAP apartments.

ERAP plans to evict those who moved in illegally, and have no plans to resettle them.

At the initial stage of the project, some families feared a possible eviction if the redevelopment took place. Cioppi said that only those who have occupied the apartments illegally would be evicted, but that the cases are very few.

The mayor has also guaranteed that families will not be removed from their homes.

“They will not be sent away. They will be moved somewhere here in Urbino for the time of the redevelopment,” said Gambini.

The families who live in the apartments that will be remodeled will be temporarily moved to other buildings in the complex.

Gambini said he understands that the project has been promised for years. He is positive it will happen because the municipalities were able to secure funding two months ago.

Despite living in the area for more than 20 years, obtaining a legal status, purchasing property legally and their children being born in Urbino, residents who migrated from outside Europe face discrimination from locals who base their beliefs against them on stereotypes, residents and city officials said.

In 2011 a raid took place in the neighborhood in which 100 carabinieri, Italy’s military police force, stormed into every apartment looking for undocumented people as part of a national stop and search campaign around the country. They didn’t find any irregular activity, and all the residents had proper documents.

“Everyone who lives here is legal and has papers,” said Ljatifovski, who is an Italian citizen.

“The only thing they did was prevent some children to use the school bus because they didn’t have tickets, which is really something horrible,” said Barberis, who was doing research in the neighborhood when the raid took place and remembers the coverage it received from the local media.

Barberis, a member of Regional Anti-discrimination Committee, blames the media coverage of Ponte Armellina for perpetuating stereotypes related to criminal activity in the area. “Local media is extremely racist, perhaps not explicitly. Every day they give ethnic label to criminals. If an Italian makes a robbery, then it’s a person making a robbery, but if it’s a Moroccan making a robbery, then it’s a Moroccan robber,” said Barberis. “It’s giving ethnic labels to behaviors.”

“At first it was kind of a bad neighborhood, but then newspapers made it worst,” said Maler. “They mixed facts with politics.”

Giovanni Lani, editor of the local edition of Il Resto Del Carlino, a national newspaper, does not think his publication gives a bad reputation to Ponte Armellina.

“If you go to Gallo di Petriano or other places near Urbino 2 and ask people what they think, they say it’s dangerous,” said Lani. “We don’t say this, the administration says it and we repeat it.”

Lani said the use of terms that could be seen as problematic could’ve been the case in the past but not now.

“I don’t know if they [residents of Ponte Armellina] can read Italian or if they read the newspaper.”

As a way to break the negative stereotypes tied to the community and neighborhood, filmmaker Andrea Laquidara made a documentary called Fuori dalle mura. In the documentary, Laquidara showed how people consider Ponte Armellina a second Urbino.

“Ponte Armellina is part of Urbino on paper,” said Laquidara.

When he premiered his documentary in Urbino last January a person from the audience asked him why he hadn’t interview Urbino residents. In the documentary, Laquidara interviews a child from Ponte Armellina who was born in Urbino and is of Macedonian descent.

“People don’t consider them as citizens,” he said. “A stereotype is that citizens are only those whose relatives come from Urbino. We have a new kind of society now.”

“People who live inside of the walls don’t know who is outside of them,” he said.

Gambini said Urbino is a city that welcomes immigrants and that they have always been present.

“The main goals are integration and to avoid creating ghettos,” he said. “Schools should be granted to everyone and help the process [of integration].”

Despite the problem residents face, the majority of the community of Ponte Armellina is glued together by faith.

“We are mostly Muslims. The country you’re from doesn’t really matter. What keeps us together is our faith,” said Marel.

Ljatifovski remembers that a few years back a resolution of the region labelled his neighborhood “the worst area in Le Marche.”

“If people don’t come here they won’t see what the reality is,” said Ljatifovski. “We are not animals.” 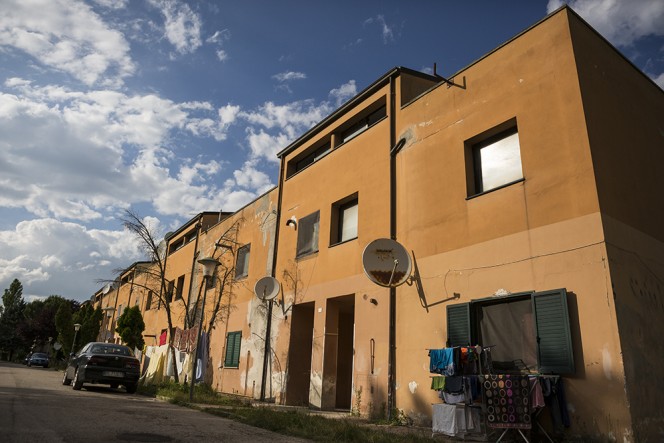 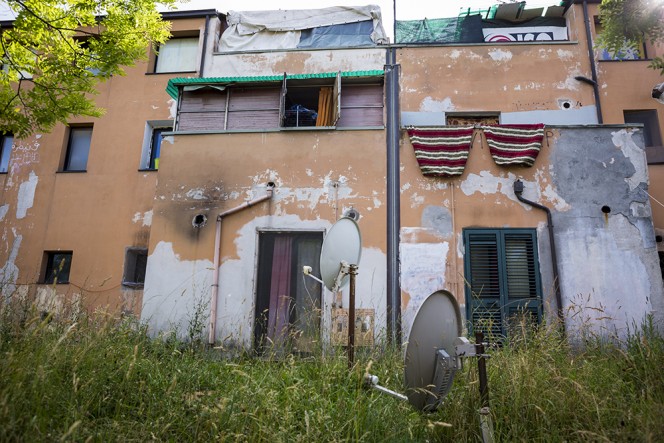 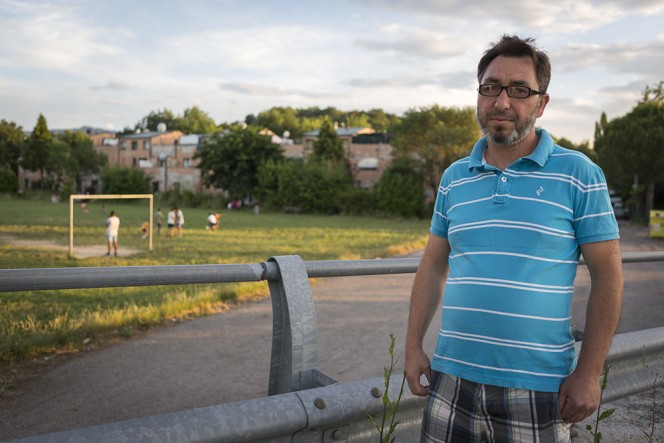 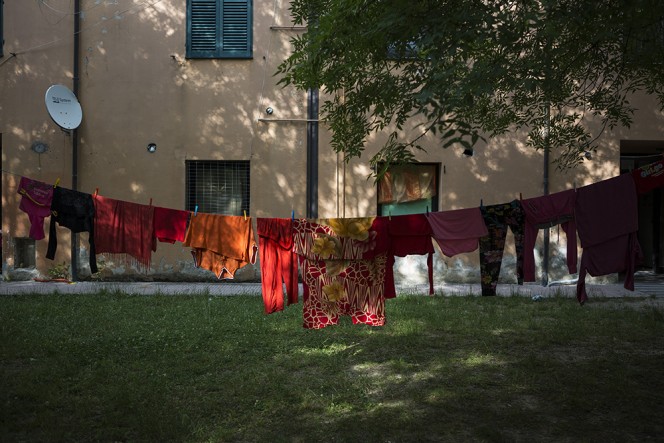 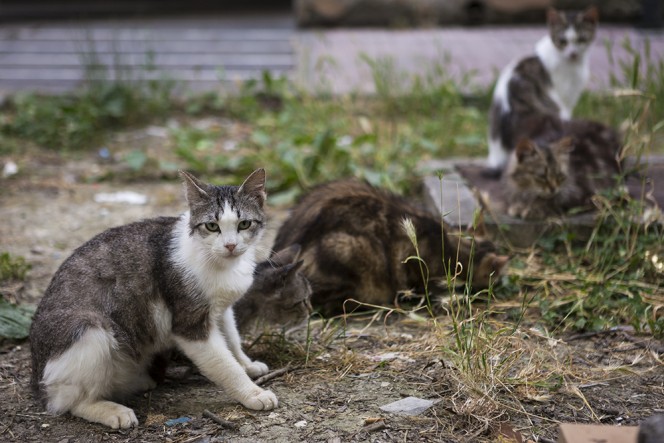 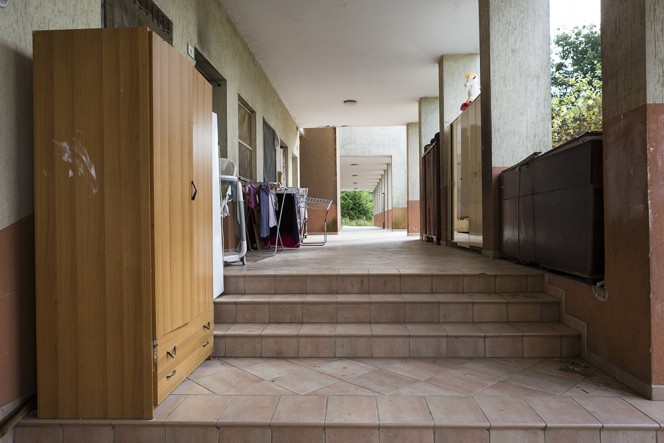 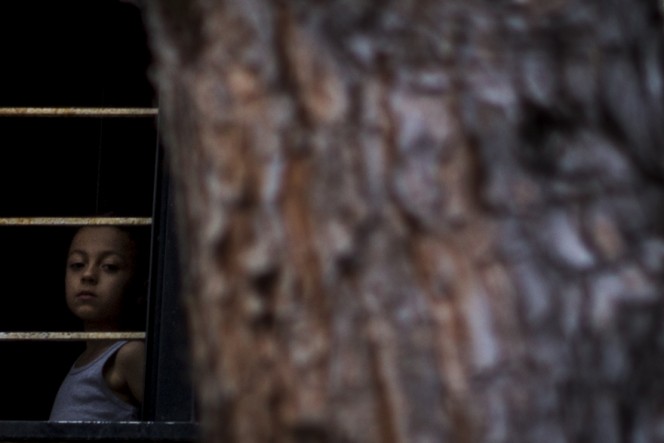