Giuliano Berloni leans back in his chair and lets out a bellowing laugh that fills his tiny office. His stomach bounces under a blue and white pinstriped button-down shirt. Tanned wrinkles stretch as his face breaks into a warm smile.

“No, no we didn’t run into any challenges when we started this business,” he says.

His son Alessandro sits at an adjacent desk, playfully coaxing his father’s answers and cracking jokes in booming Italian and fragmented English.

“Yes, but the paperwork was awful,” says the son. “They sent us on a wild chase from office to office.” 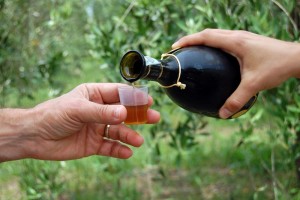 Alessandro Berloni pours a sample of his father’s olive liquor, which is based on a 2,000-year-old recipe.

“Ah, it was awful,” Giuliano replies. “But as for real challenges, there were none. Production began slowly, but then we sold out of our first two thousand bottles.”

They sit next to each other not only as father and son but also as business partners in an unusual company located within the DOP district of Cartoceto, an area about 30 kilometers from Urbino that is known for its high-quality olive oil. Along with a successful line of the expected product in this area, Azienda Agricola Berloni has gone one step further to generate something no one else is producing from olive trees—liquor.

Giuliano and his family have been producing this unconventional liquor since the early ’90s on their organic farm in the town of Tavernelle di Serrungarina. Their love for the land, enthusiasm for the origins of their product, and strong dedication to manufacturing only the best have made the company an award-winning pioneer among organic olive farms. But as demand continues to grow, Giuliano and Alessandro find themselves looking along two diverging paths. One leads Giuliano to his retirement. The other leads Alessandro, 28, to other jobs and interests in the city, casting a shadow of uncertainty over the prospects for this family-run business and the future supply of its unique product.

“Four or five years ago I got a request from the U.S. for forty to fifty thousand bottles of liquor, but we just couldn’t meet that request,” Giuliano says. “I am getting older and don’t have the interest to grow the industry. My sons are pursuing other things in their life, and I respect that.”

When Giuliano began this business 14 years ago he had no intent of it becoming such a hit. He had simply started it to keep himself busy after leaving the bustling city of Rome and 30 high-pressure years working as a bodyguard for the Pope. 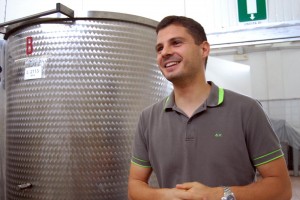 Alessandro explains that liquor inside these tanks is infused with leaves and bark from olive trees.

“I had two young sons and life in the city was too stressful,” Giuliano says. “I decided to come back to Serrungarina, where I am from, to live a more simple life.”

Giuliano steps out of the office and heads into the olive orchard surrounding the building. The June air is stagnant and sticky; the sun beats down on little green leaves poking off the branches like helicopter blades. Alessandro jokes that it’s too hot even for the birds because they aren’t chirping. His father chuckles under his breath, a smile growing across his face once again.

“I have always loved the countryside,” Giuliano says. “When we bought the land we planted 3,000 olive trees. We chose olives because there is less work to be done compared to other things like vineyards and wine production.”

The Berloni family starts the production process for both olive oil and olive liquor in October with the harvest of the olives.

“When the process begins you can’t stop working,” Alessandro says. “Once the olives are harvested the value of the product will only continue to decrease.”

First, the olives are harvested for the oil. Then, the Berlonis use leaves and bark from the trees to infuse alcohol, adding other natural flavors such as orange and lemon over a period of four to five months.

“We cannot share the recipe,” Alessandro says. “The importance of this business is that it is born from the family, so it stays within the family.”

The importance of this business is that it is born from the family, so it stays within the family.

The 2,000-year-old recipe was given to Giuliano by Corrado Barberis, a professor of rural sociology from the University of Rome, who had been extensively researching it. They met at an expo for agricultural products.

“We are basically the only ones to produce this kind of liquor,” Giuliano says. “It’s a product that doesn’t get produced a lot but we provide it for any store that asks for it. As of right now it is sold in the Netherlands, Italy, Germany, and France.”

Several shops and one restaurant in downtown Urbino provide the liquor, including Raffaello Degusteria, a quality food and wine store. Valentino Gostoli, who works in the shop, says that it is a liquor tourists buy.

“I know that my customers enjoy Giuliano’s products a lot,” Gostoli says. “He is a very nice man and he always comes to the store to deliver the liquor himself.”

Beads of sweat glisten on Alessandro’s forehead as he leaves the orchard and makes his way over to a pale pink building nearby. It looks more like an ice cream shop than a warehouse where machinery and tanks of oil and liquor are stored.

“When I was younger I would help with the harvesting of the olives,” says Alessandro, adding, “I never helped my father like I probably should have though.”

Alessandro’s younger brother, Francesco, 26, left home at the age of 16 to attend military school and later to become an officer, leaving Alessandro to help his parents out in any way he could. He is responsible for the managerial, organizational, and marketing aspects of the business, communicating with customers and traveling abroad to expos and fairs to promote the liquor. When he has time, he still helps with the harvesting and processing of the olives.

“Although the work is physically tiring it helps me to mentally recharge,” he says. “It is different work than the work we do at the university.”

Giuliano gives him a fatherly look, skeptical yet playful, as he unlocks the gated door to the warehouse.

“As of right now we don’t have the machinery or the resources to produce a lot of the liquor,” Giuliano says. “This is a small industry and we have a lot of requests that we can’t meet. The idea of expansion has always been a thought. But seeing as my sons have chosen different paths and I am getting too old, I don’t know how that will be possible unless the company is sold.”

The warmth from Giuliano’s face fades. It’s not disappointment that is left in his eyes, but sadness and a sense of what-ifs.

“At the moment I am trying to find other jobs,” Alessandro says, avoiding his father’s gaze. “Until I find my way I will help here. It is not definite that we will sell, and it is the last choice.”

Alessandro recently graduated from Libera Università Internazionale degli Studi Sociali Guido Carli in Rome with a political science degree. He hopes to find work in his field and understands that doing so might take him far from home to a city without mountains and countryside.

“I love everything about the mountains and this land,” he says. “But if moving to the city is what I must do, then I will do it to find work.”

Back in the tiny office, Giuliano opens the door to a mini refrigerator and pulls out a half-empty bottle of liquor. Underneath the label, in flowing white cursive script is a quote from Dante Alighieri, the writer known as the “father of the Italian language.” It reads, “I’ve stopped here at the service of God and with food and olive-liquor I ran slightly warm and cold, happy with my contemplative thoughts.”

Giuliano picks up the bottle and grasps the top with his large hands and twists, the cork squeaking with every turn until it pops off. He pours the sweet smelling, amber liquor into a tasting cup and hands it to his son who sips it slowly.

“It is slightly bitter, smells of lemons and orange, and has a sweet balsamic flavor,” Alessandro says. “I like it a lot, and so do my friends. We bring it to dinner parties and other events.” Alessandro laughs as he recalls a time when one of his friends passed out on his couch after drinking a whole bottle.

“I only drink it hot with a slice of lemon,” says Giuliano, echoing his son’s laughter. “But you can enjoy it cold on the rocks in the summer time or as a drink after dinner. Some people even like it over ice cream and pancakes.”

Marco Santini, who works at Enoteca Magia Ciarla, another establishment in Urbino that sells and serves the liquor, says people love this product because it can be enjoyed in so many ways and is not as alcoholic as other beverages.

“Young people don’t love it as much,” he says. “But older people like it because it is sweet. They come to drink it in the morning or after dinner.”

Alessandro picks up the liquor, leaving a ring of sweat from the bottle on the desk, and places it back in the office refrigerator.

“I take great pride in the final product,” Giuliano says. “We only put the best ingredients in our product and everything is organic so that we can be a certified farm.”

Alessandro explains that there is a saying in Italy about using all the parts of a slaughtered pig and not being wasteful. He says he and his father jokingly apply the same expression to using all parts of the olive tree at their farm. That is not always easy, he adds, because in an agricultural business you cannot control everything.

As the midday sun begins its descent, shadows fall across the orchard like the uncertainties hanging over this family-run business. Father and son climb back into their silver van to head home—the end of the workday has come and gone, but their business is only one aspect of their relationship. 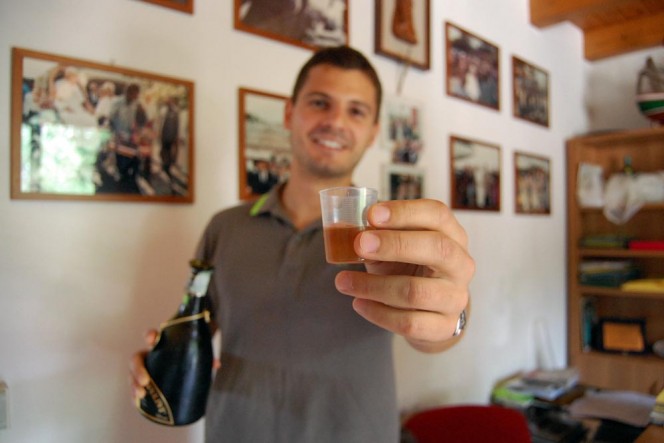 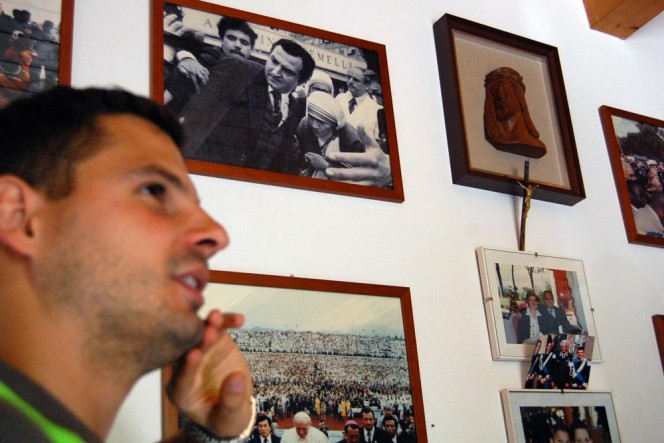 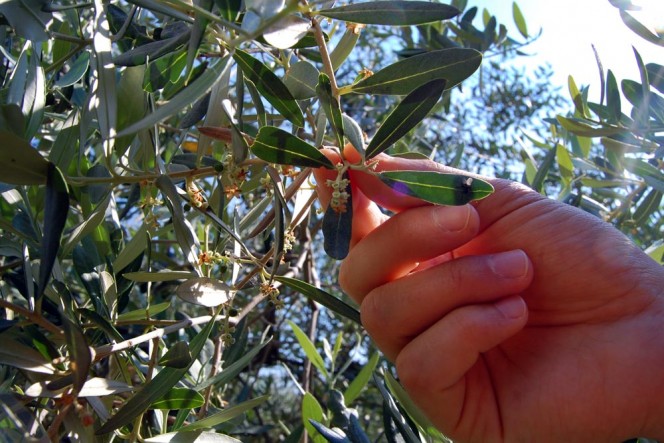 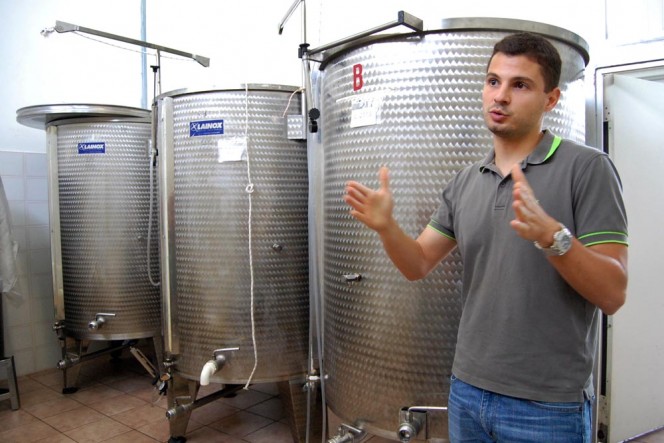 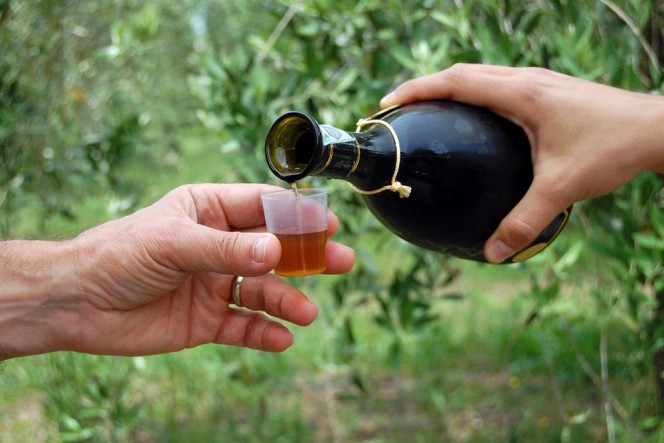 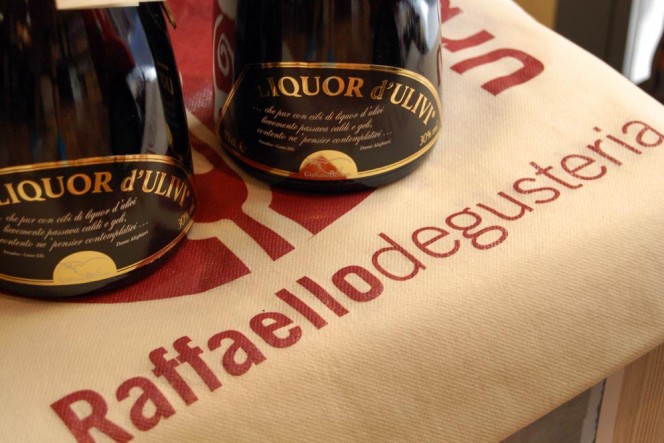 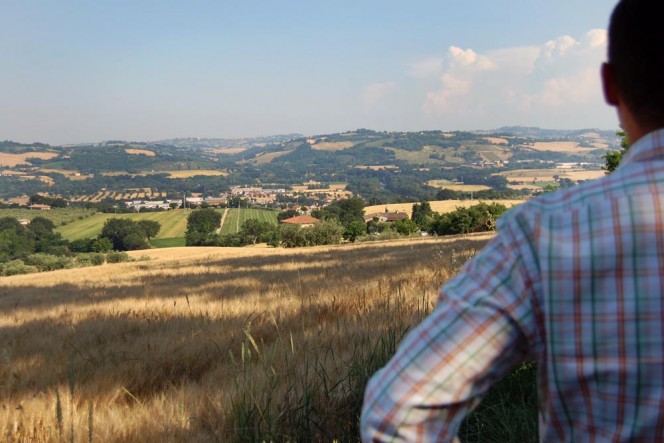