From settings to culture to educational programs, there are strong links between Shakespeare and Italy

Laughs echo off of the brightly painted, gold-trimmed walls of Teatro Comunale in Cagli. The voices of British actors Julian Curry and Mary Chater fill the room, passionately describing their love for Shakespeare and Italy. Both have spent their artistic lives working with his plays, and in doing so drew a significant connection between the two.

“Shakespeare wouldn’t have been Shakespeare without Italy,” says Curry. “I feel it’s a bit messianic… I feel we’re sowing the good word about Shakespeare in Italy,” adds Chater.

The couple’s program, Shakespeare in Italy, aims to keep Shakespeare’s work alive in the Le Marche region. Not only will they present his plays, but they also have created a program for English-speaking students. The program allows participants to study selected plays and identify the influence that Italy and Shakespeare have on one another. 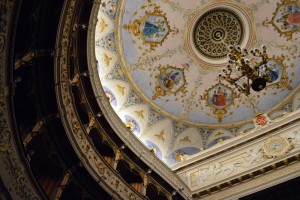 The beautifully detailed ceilings of the Cagli theater, enclosed by a section of the 500 seats that encircle the stage.

Tucked into the valleys of central Italy, Renaissance towns Cagli and Urbino are the ideal setting for a cultural association dedicated to the profound connection between Shakespeare and Italy. Teatro Comunale in Cagli is where the program’s plays take place, whereas Urbino University is where students will be attending lectures and discussions.

After years of playing the roles sculpted by Shakespeare, Curry and Chater both have a first-hand understanding of the different aspects and angles that mold each play.

Aside from being overflowing with Renaissance art and culture, Shakespeare critics may wonder why Urbino and Cagli were the areas of choice for such a program.

At least 13 out of his 38 plays are partially or wholly set in Italy. Romeo and Juliet’s forbidden love bloomed in the balconies of Verona. The manipulation to obtain power in Othello occurred among the canals of Venice. Still, there is no obvious mention of the Le Marche region within Shakespeare’s work—or is there?

Curry and Chater pop up in their seats, exchanging enthusiastic looks before sharing their insights into what from this quaint region of Italy may have been one of the greatest influences on the playwright’s career: Baldassarre Castiglione’s The Courtier, a book published in 1528 in which a main character is Duke Federico of Urbino.

“This book is about how Duke Federico in the mid-1400s organized his court,” explains Chater. “He  built an amazing Ducal Palace. In this palace, he made sure everyone could sword fight, read, play music, sing, dance–everybody, not just the famous or rich. Castiglione’s book told you about how society could be ordered if you had this wonderful way of educating people.”

Curry and Chater are not the only Shakespeare experts who believe he read the book and was influenced greatly by its lessons in how to organize a court. This view is shared by, among others, Sylvia Morris, author of The Shakespeare Blog and a contributor to Cambridge University Press’s recent book Shakespeare and the Digital World.

One crucial aspect of The Courtier was the requirement that a gentleman portray himself as humble and with ease rather than effort. As Morris discusses in her blog, this idea is paralleled in Shakespeare’s own work, Richard III, as Richard cannot ascend at court because he does not possess the attributes that are described by Castiglione. He is not graceful or put together, and as a result becomes a villain of the play. 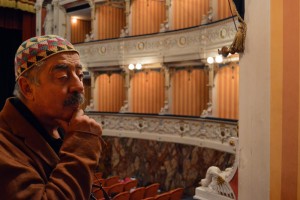 Manager of Shakespeare in Italy, Sandro Pascucci, as he shares his knowledge and experience with Teatro Comunale in his 15 years as manager.

The Courtier also may have helped Shakespeare in his own aspiration to reach the top, guiding him on how to be a gentleman himself after starting in the lower class. In any case, this direct connection to Urbino demonstrates the local air that entered Shakespeare’s artistic lungs, giving his work life at its core, and still now striving to keep those works alive.

While settings are the obvious connection between Shakespeare and Italy, the themes are in fact where the relationship lies.

“It [Shakespeare’s work] is a heartbeat… it’s for all of us,” says Chater as she smiles at the thought of Shakespeare’s universal themes, their applicability, and how they unite everyone.

Common motifs that stitch together the playwright’s work include power struggles, love, guilt, and retribution. These are themes that remain relevant regardless of place or time. Moreover, they are themes that, although couched in Italian settings, spoke to issues arising in England at the time.

Urbino University’s English literature professor Roberta Mullini contends that Shakespeare’s strategy of using Italian settings and characters was the playwright’s creative way of magnifying the issues of his own country.

“I think that even if they [Italian stories] have the flavor of Italy, they are actually to talk about England… to talk about English history, because he [Shakespeare] couldn’t do that. I think he had both aspects in mind: the Italian flavor and the English underneath that, and the possibility of talking about his own country,” Mullini explains as she opens the shutters of her dimly lit office, allowing the smoldering heat and bright sunlight of mid-afternoon Urbino to illuminate the room.

Mullini, who has taught Shakespeare since 1976, gazes out the window as she speaks, eyes floating over the cobblestone roads and endless hills of central Italy that disappear into the blue sky just as her words trail off.

One work that comes to mind when considering this theory is The Tragedy of Julius Caesar, believed to be written in 1599, that is partially set in Rome.

The play demonstrates issues that were prevalent in England at this time, such as power struggles and uncontrollable rulers. It also put emphasis on the issue of succession to the throne, which was a concern of England with Elizabeth I at the time.

The play’s assassination of Caesar begs the question of what Shakespeare was trying to inspire within his own country, whether it be a rebellion or just a simple seed planted in the minds of a few, and it is arguable that he used his plays as a roadmap to justice.

Others experts, such as artistic director of Shakespeare in Italy Bill Alexander, assert that Shakespeare is among various writers of the early modern period who were influenced by Italy.

“It was the center of the Renaissance thought and the revival of classical learning,” says Alexander.

Chater believes that it was Italy’s alluring atmosphere, both in attitudes and in developments, that drew those from England in, just as it drew her and Curry. It filled them with curiosity and wonderment until they would overflow without the ability to channel it in some way, such as writing plays.

Sandro Pascucci, manager of Teatro Comunale and the Shakespeare in Italy program, gestures towards the sea of seats and brightly lit ceiling of the Cagli theater. As he does so, he references the 500 people it can hold, as well as its history, going back to its opening in 1878. 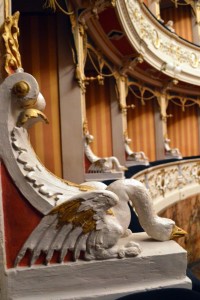 The intricately carved balconies that line the walls of Teatro Comunale.

This summer will be the program’s second time inviting students to immerse themselves in Urbino for two weeks of lectures, discussions, and practical work on scenes of Shakespeare’s plays. They will focus on Othello, The Taming of the Shrew, and The Winter’s Tale. The program runs from June 30 to July 14.

Pascucci says the history of theaters in the Le Marche region makes it the perfect area for a project such as this one. Although small, the area has the most historical theaters in all of Italy, 80 in all. Teatro Comunale specifically was most recently restored in 1999, a project in which Pascucci participated.

“The main difference between this program and others is that it gives students the opportunity to study Shakespeare in a place that influenced him,” says Pascucci, who has been a manager for 40 years, experiencing a variety of  programs.

This unique characteristic allows students to envision what Shakespeare was so taken by, the aspects of the Renaissance that drew him in and inspired him to create the works that they will analyze in depth, picking out each correlation along the way. Specifically, Urbino is filled with art, culture, and previously mentioned influential landmarks such as the Duke’s Palace. These students will have the advantage of walking the same streets as people who were so deeply influential to Shakespeare’s work, such as Castiglione.

“It’s in a place that makes you feel the time in which he lived,” says Pascucci, and thanks to Shakespeare in Italy, a place that continues to keep him alive. 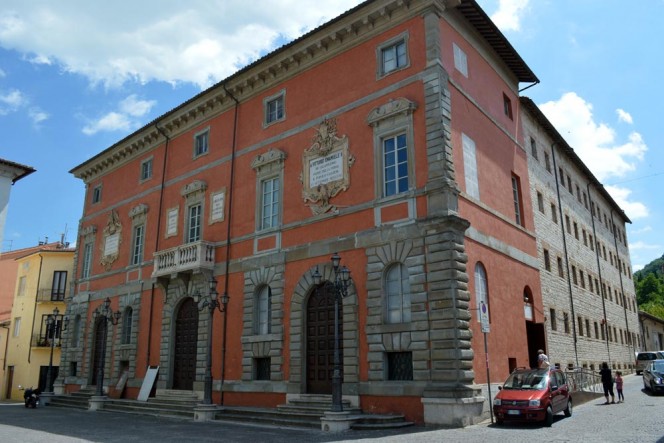 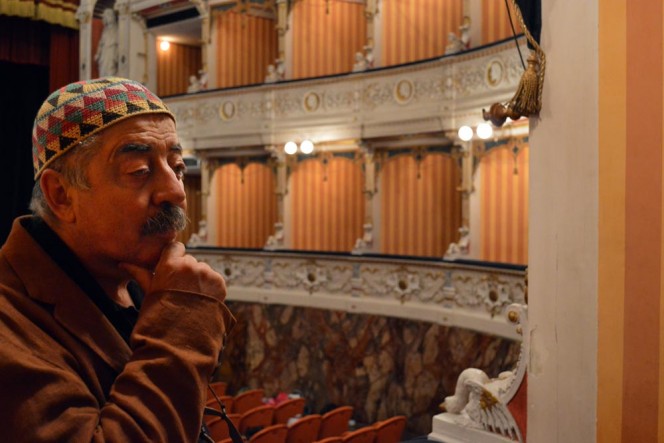 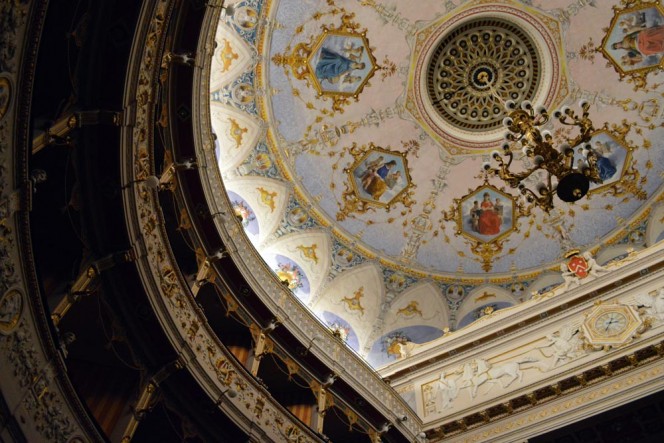 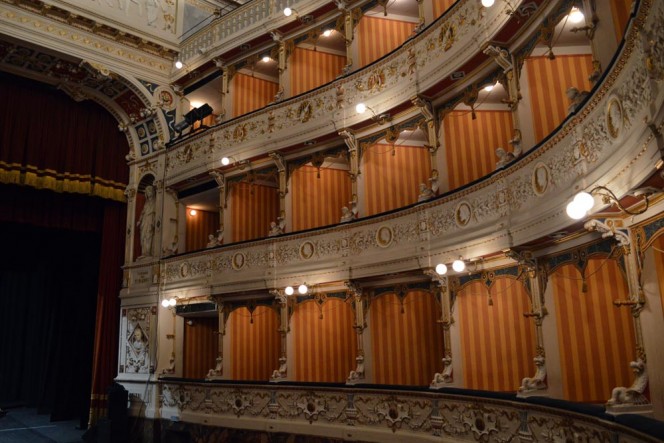 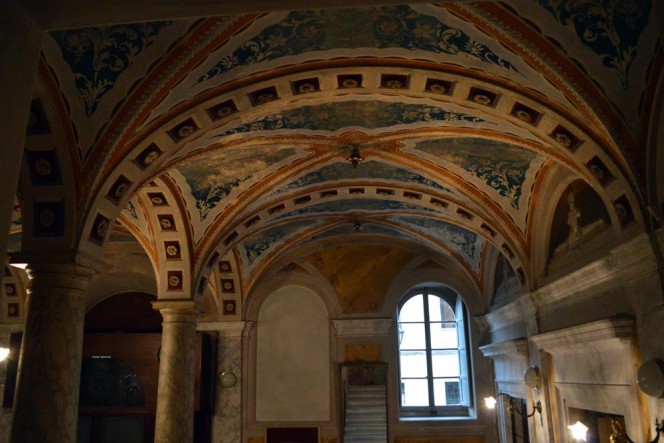