Modern Art in an Ancient City

In the birthplace of Raphael, new artists try to work on the edge

Two peacocks stare down from their cage as the group gets out of the car at Cafe Molena. Gabrielle Arruzzo sits at the head of the table wearing a yellow shirt that reads PacificUV, a synthpop band from Northern Georgia. His students gather around the sides. One gets up to take orders while another sets the tablecloth. Arruzzo leans back to stretch, his long thin fingers grasping at the air. Without taking off his sunglasses he asserts that art in Urbino is dead. 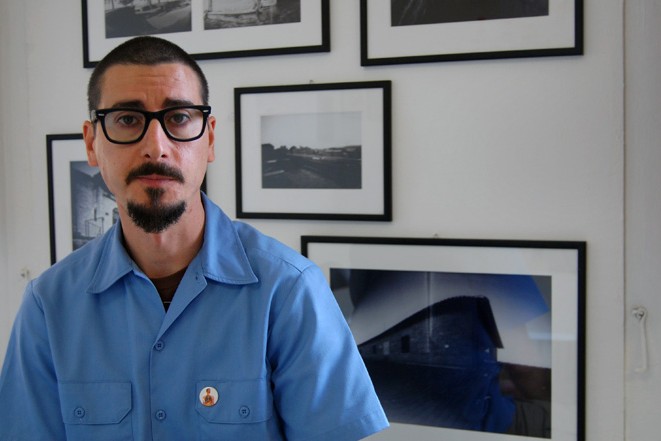 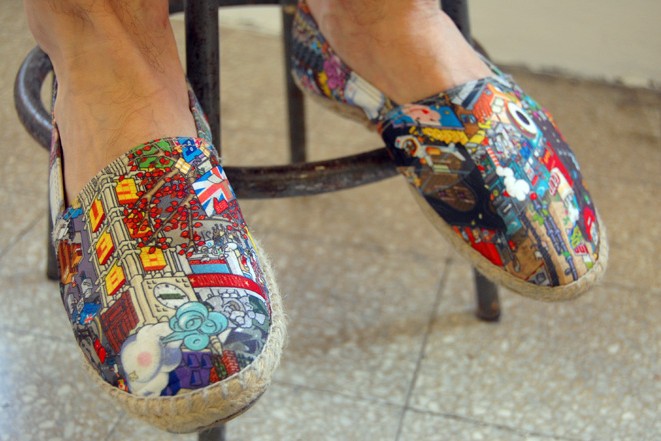 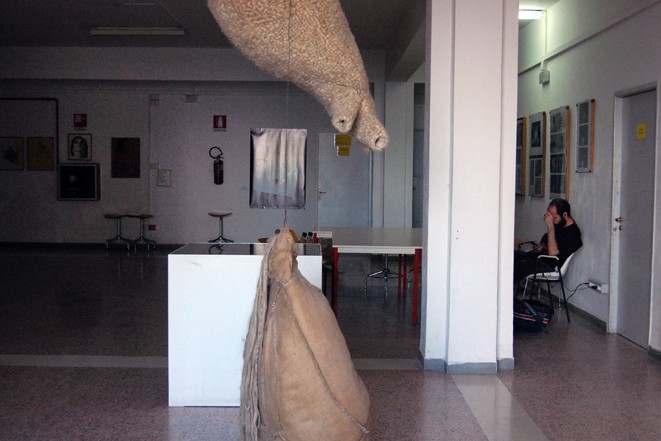 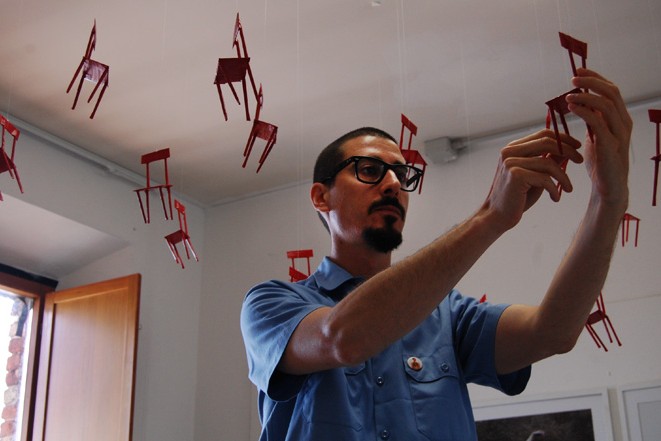 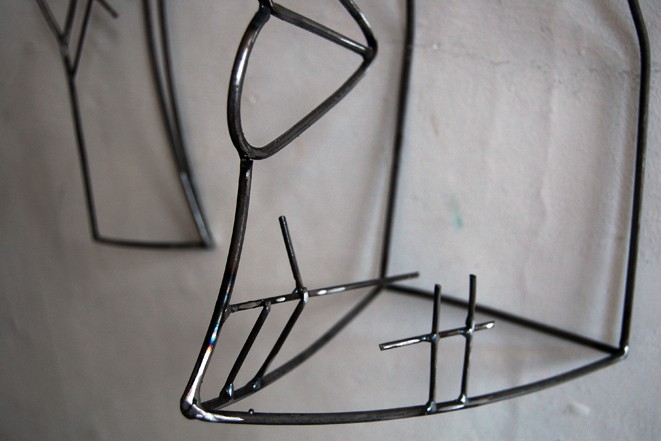 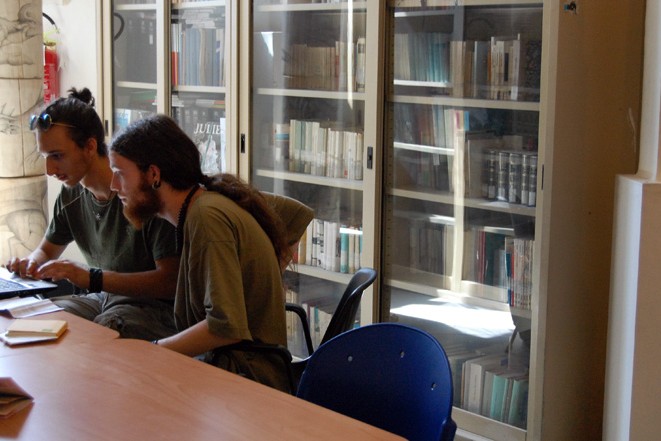 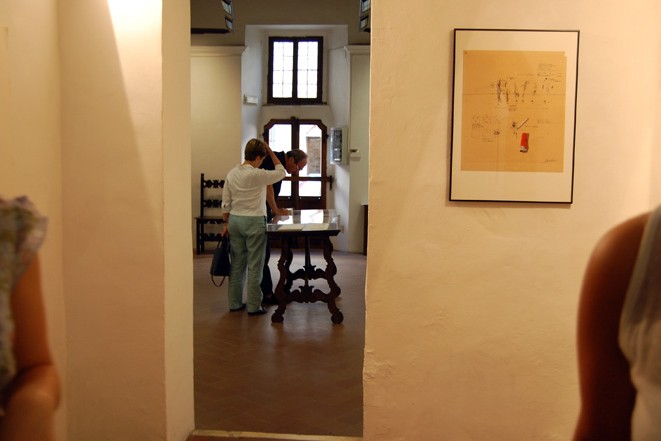 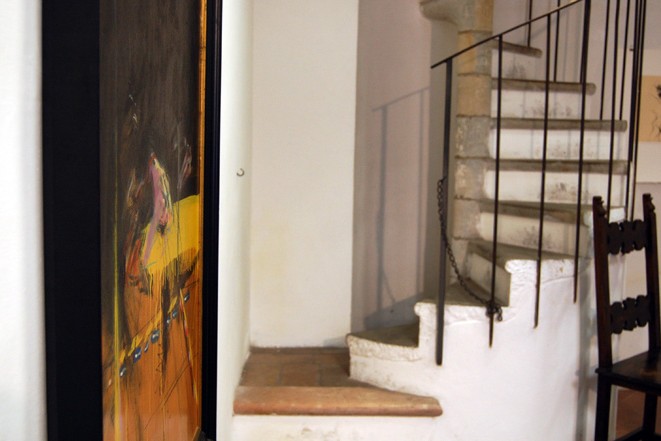 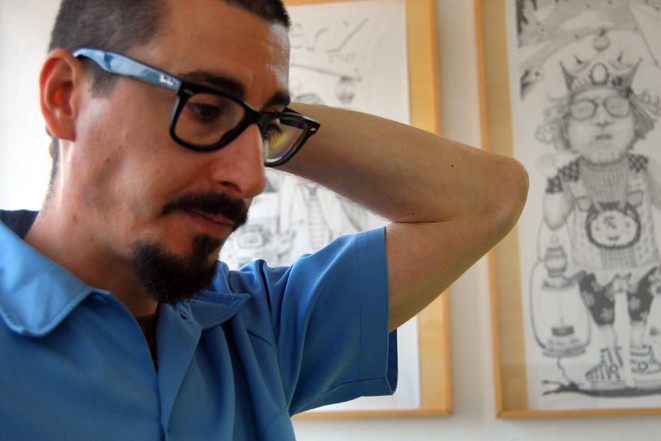 At 38, Arruzzo is one of the youngest professors at the Accademia di Belle Arti di Urbino. He has been teaching art in Urbino for seven years but is still waiting to receive a permanent position. Much like the rest of the city, there seems to be no space in the Accademia for change.

In the place of Raphael’s birth it is difficult for many to look beyond their rich history. And yet, Arruzzo and his peers continue to embrace a new Italy. Artists are showing work in cities around the country, attempting to make a name for their generation. According to Arruzzo, the movement is based on frustration and irony. They have grown up looking to separate their voices from the engraved history Italy has written for them. Arruzzo travels and works as a teacher to fund his art, with studios in Milan and Pesaro. It is difficult to say if his pieces will ever be able to go much further.

“To study modern art in Urbino is somewhat of a contradiction,” Arruzzo says just as the food arrives. While the university is well respected, he explained, very little effort has been put into creating a new art scene within the city. Most students come here and leave as soon as they graduate. Because it is smaller than other art academies, they are able to have a closer relationship with the faculty than if they had attended a different school. While this is helpful in the development stages of their work, eventually school is not enough. Arruzzo tells his students to travel outside of the city to visit museums and gallery openings in Rome and Milan. 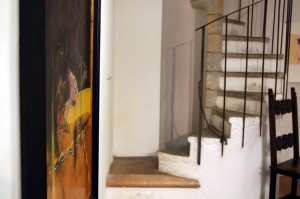 The remains of Raphael are everywhere in this Renaissance town. His house preserves his memory, but also encourages you to look beyond him and his era.

Arruzzo was born in Rome, and then moved when he was six to Pesaro, his mother’s oceanside home town. “I need the sea, but my ambitions are not to be just a Pesaro painter.”

He sniffs, coughs. The season has been hard on him. As a chronic asthmatic, he spent much of his youth indoors looking at books. Every year the banks his father worked for gave them dozens including illustrated encyclopedias, history books on the Italian Renaissance, and religious texts. On top of that his father also had a large comic collection that strayed from the typical mickey mouse type of cartooning. Arruzzo started his career doing graffiti around cities he traveled to, and became friends with the street artist Blue. The culture surrounding this kind of art emphasizes politics and an unwillingness to create art for fame and money. “I understood my background after I started to paint, it was not a conscious thing.”

I need the sea, but my ambitions are not to be just a Pesaro painter.”

His paintings tend to resemble screen prints, especially in photographs. They are characterized by thick black outlines and details, but in real life there is a subtle depth to them caused by many layers. Bright colors clash against the iconography. He uses old images and symbols to discuss current issues that still face Italian society and artists’ lives. One in particular that jumps out: Hitler staring at a blank canvas, his foot in Duchamp’s infamous found urinal. Goats and flowers crowd the background. Arruzzo is creating something for the viewer to interpret, and is unwilling to spoon feed his message.

Rap and electronic music speak especially to him. These mediums are comprised of a repeated found sample and layers of original material on top. In a similar vein, his work is attempting to say something new using familiar words. As he stands up from the table and stretches, the noon sun casts harsh shadows across his face. “After Shakespeare talking about love what could be new? [It is the same for art.] I am friends with an old lady called painting.” 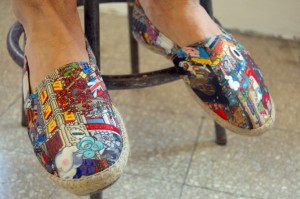 Arruzzo loves comics, and incorporates similar graphics in his paintings. He wears bright colors, at times matching his work.

And the omnipresence of the past is especially present here in Urbino. You cannot escape the Renaissance or the men associated with it. The city’s walls clearly define the limits of what used to be. One of the reasons why Urbino has not been hit as hard during the economic crash has been the tourism. Urbino is in the running for the European Capital of Culture for 2019, and so there is even less reason to push for modernity.

“Teaching was always plan B.” When he was rejected from the Higher Institute for Artistic Industries, an extremely competitive graphic design school in Urbino, Arruzzo instead attended the Accademia. After graduation he applied to the government for a teaching position in order to fund his work. That was in 2003. After five years of waiting it was finally granted to him, but because the retirement age has been pushed back, there are currently no permanent jobs available. He has been to Milan, China, and Brazil to show and work on art.

Raphael did not influence Arruzzo, but the old masters’ mere existence is necessary for all Italian art work. “I did not need to know them to meet them.” Even more than Raphael, Arruzzo said, the Pre-Raphaelite Brotherhood has made the meeting of old artists possible. The group, formed in 1848, valued the abundant detail, intense colors, and complex compositions of Quattrocento Italian art. They preserved old buildings and paintings and valued detailed colorful work.

Art student Miriam Pascale says there is nothing for her here.

One of the spaces that they worked hard to save was Raphael’s birth house. Oddly enough, it now includes the only gallery in Urbino that shows modern art. The house is on a hill right up from the piazza, two small flags resting above the door. The gift shop on the right contains postcards and history books, and the house above has copies of Raphael’s work and remodels of his modest birthplace. The gallery on the bottom half opposite the gift shop is free to enter and hosts different artists that are usually alumni of the Academia or professors. The spiral staircase reflects the neon green paintings on display. The gallery doesn’t have its own name.

Raphael’s paintings explore mortality, religion, and the urge to maintain appearances. At the root of it, he strived to encompass Italian society, just as modern artists must do.

Walking down the hallway of the Accademia, student Miriam Pascale explains the different sections of the building. She is studying to be what roughly translates as “decoration – contemporary visual arts.” Miriam is one of Arruzzo’s students, but she does not plan on practicing art in Urbino after she graduates. There is nothing for her here. Hopefully, she will get a gallery job curating in a city. If not she can always teach. But, she says, “there is a difference between studying art and being an artist.” The exams here are difficult, spanning hours and including oral and practicum.

But Arruzzo feels that to know specifics that are being tested and to feel the urge to create are two separate things. Students say he is a tough grader, expecting them to understand this and to be just as passionate as he is.

The peacocks rustle their feathers, and it echos across the empty tables. Arruzzo begins a tangent that slowly comes around to the unhappiness in art. Even so, he says, there is a drive to create. Even in towns like Urbino that do not have a community. The statement ‘art is dead’ lingers in the thick air. Arruzzo sips his beer “When we see successful artists, famous artists, we are only seeing a reflection of who they are. We don’t see how they suffer.” Suffering will come, he explains, in the big cities or in the small towns. Urbino may make it difficult to spread your ideas through modern art, but it is no worse off than most other places.