A powerful aroma of sweet perfume fills the air as the sun peaks through the ivory clouds on a warm afternoon in early June. Among the hills outside of Urbino lies a secret garden, unknown to many. The delicate, white painted sign at the end of the driveway reads, “Giardino delle rose perdute” (Garden of lost roses). Rolling hills of greens and browns can be seen for miles at the top of the hill. The town of Urbino sits below; the old brick walls seem small from up above. The only noise comes from a flock of birds flying overhead. Vibrant pinks and purples envelope you in a bed of roses. A woman stands among the roses chatting briskly on a cellphone, her purple shirt matching the flowers she stands between. She ends the call. Her calloused hands carefully pluck one of the purple roses and present it with a welcoming smile. This kind gesture invites you to the secret that is Rosetta Borchia’s ancient heirloom rose garden. 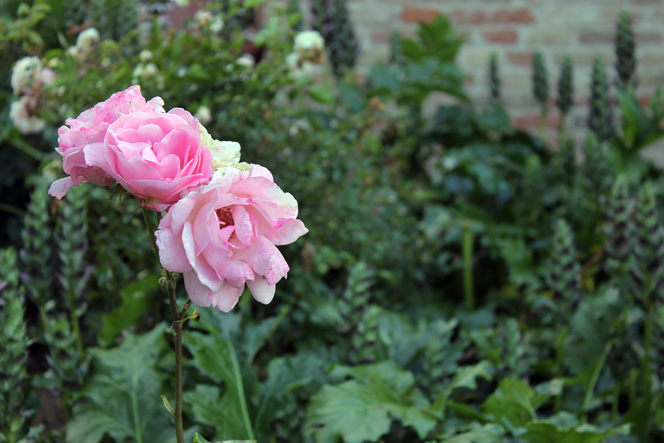 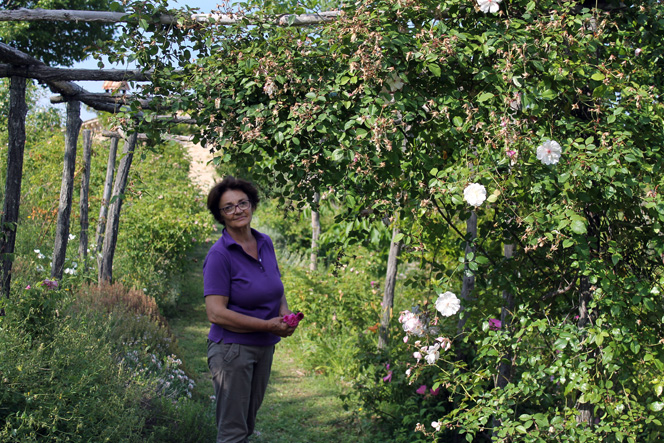 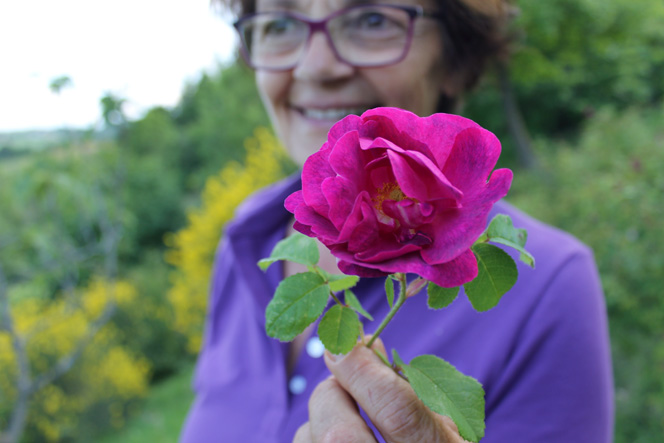 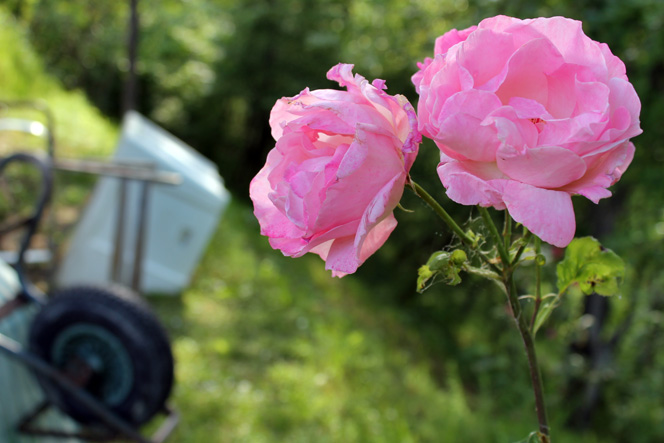 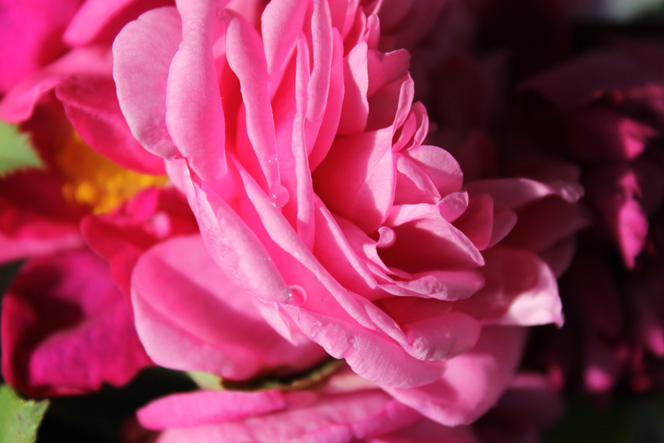 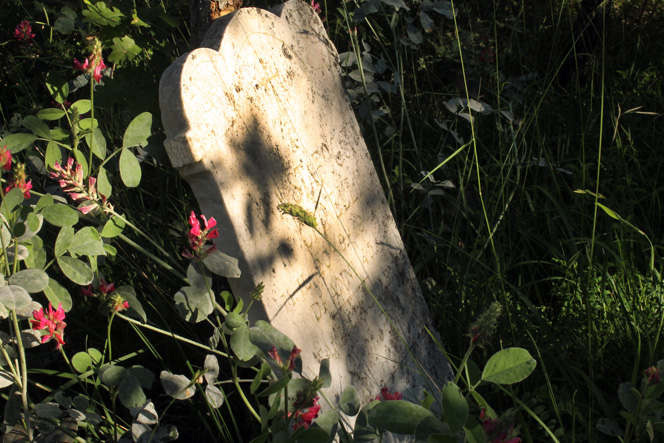 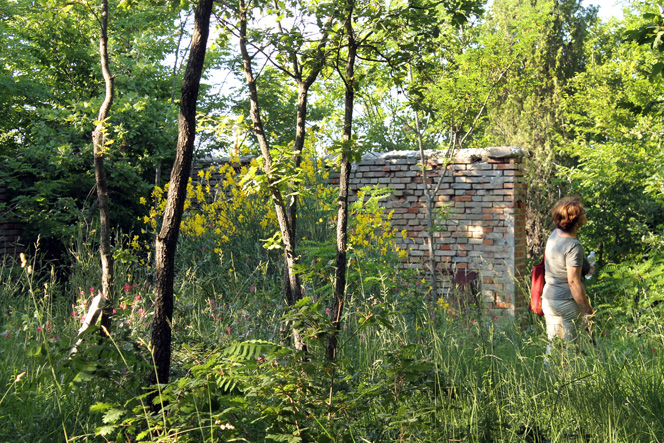 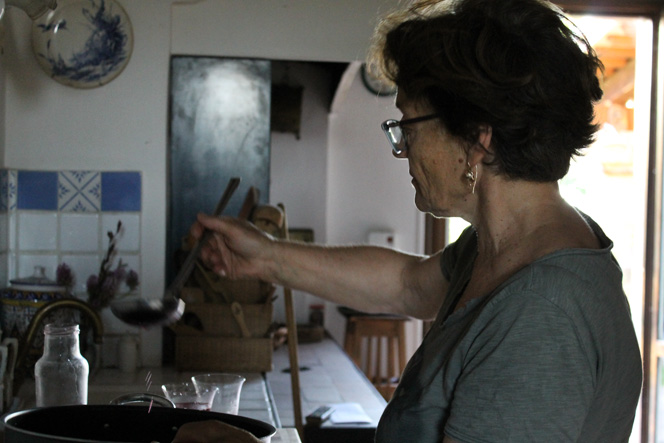 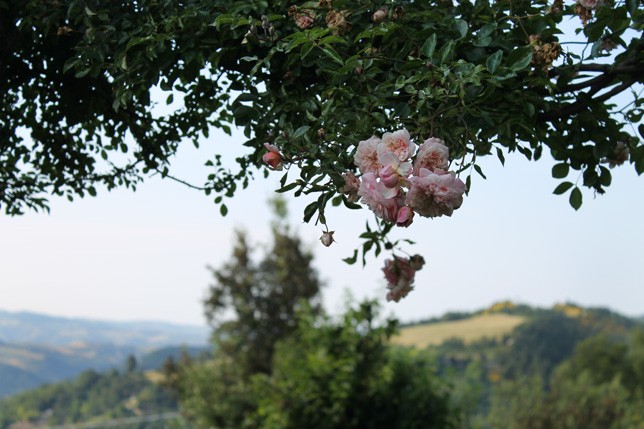 Combine three years of research, 15 years of collecting roses from abandoned cemeteries, and one determined, passionate woman, and you will find a magical garden of over 100 unfamiliar ancient roses hidden in the hills of Urbino. While the world was ringing in the new millennium in 2000, Rosetta Borchia was moving her husband, Angelo, and son, Giovanni, to a hillside house on the outskirts of Urbino. With an ample amount of land at her disposal, Borchia, a painter and nature enthusiast, became determined to build a virtual work of art. The spotting of a single rose on the side of the road sparked an idea and a passion. After deciding that this sighting was fate, she began her research on ancient roses in the Le Marche region. Today the garden is host to the one of most extensive and unique collections of ancient roses in the world.

Borchia’s passion for nature and more specifically for the beauty of flowers radiates from the wonder in her eyes as she recalls the blank canvas she started with many years ago. As a painter, she has an eye for artistic opportunities. Looking out over the vast, empty land, she knew that a garden full of rich colors and powerful scents was exactly what her home needed. One short back-country drive later and her imagination was ignited. 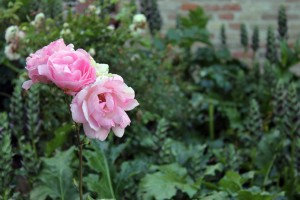 A pair of heirloom roses linger in the early days of June after the peak bloom season in May. Rosetta Borchia’s garden is home to more than 100 ancient varieties of roses.

As a young girl, Borchia dreamed of wanting to receive a single rose. “Now that I have all these roses it’s only fair for me to share them,” she says. The final product, “The Garden of Lost Roses,” has taken her 15 years to complete. The first three years were spent with her nose in books, reading and learning everything she could about ancient heirloom roses. After discovering that the majority of roses were located in old cemeteries throughout Italy, she began her search. With the help of the municipality of Urbino, she was granted access to the abandoned cemeteries of the region where she found the small treasures she was searching for.

As the sun shines down on a hot June afternoon, Borchia demonstrates what a typical searching day would be like. Clad in an olive green t-shirt with a subtle rose pattern gracing the front and a pair of gold rose earrings dangling from her ears, she treks through the remnants of an ancient, abandoned cemetery. Stick in hand to fend off the snakes, she walks through the long patches of overgrown weeds and grass. This is one of the many cemeteries she worked in day and night in hopes of finding an ancient rose to add to her garden. To the average eye the cemetery looks as though there could be nothing worth finding. Broken headstones and decaying structures scatter the ground, but Borchia knows exactly what she is looking for. Despite the discouraging look of the place, under a chaos of overgrown grass she points to the remnants of an ancient rose. “Right there you would have found the root of an ancient rose. I would take note of these during the blooming season and come back in the winter to dig it out so that I wouldn’t have to deal with this,” she says as she points in the direction of a snake slithering by.

Stick in hand to fend off the snakes, she walks through the long patches of overgrown weeds and grass.

Cemeteries such as these down bumpy back roads hold the treasures that Borchia cherishes. Throughout her search she remained dedicated, following wherever her research took her. “I would search from sunrise to sunset around Le Marche, Tuscany, Pesaro, and Rimini,” she says.

These heirloom roses are not the type of roses you will find at the cashier of your local supermarket. Ancient heirloom roses are from before the 18th century, making each individual flower a unique experience for your eyes to observe. Each flower is made of layers of intricately designed petals. Some speckled, some streaked, the roses combine to create a mosaic of rich hues throughout the garden. 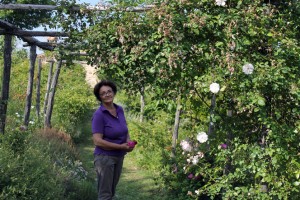 Borchia stands among her flowers under one of the many trellises she has gradually added to her expansive garden overlooking the town of Urbino.

Although the green foliage and vine covered trellises can be seen throughout the year, the true spectacle begins in May when the roses begin to bloom. Heirloom roses bloom only once per year during the month of May, unlike modern roses which can be purchased at any time of year. This month holds a depth of possibility for nature to come alive and radiate a spectacle of pinks, purples, reds, and whites. The true awe in Borchia’s garden is not found in the upkeep of the garden, as it requires little to none—but in the attention to detail. Each rose contrasts the next, making the garden flow rhythmically from path to path.

Hidden behind thick purple glasses, Borchia’s dark hazel eyes glow with the intensity of her passion for the roses. She walks through the garden, confidently explaining each rose, subconsciously pulling out weeds as she goes. She stops and subtly scans the garden, amazed at her own accomplishment. “Sometimes I stop and look around and I can’t believe the garden has made it to this point,” she says. She created the garden she holds so dearly to her heart all on her own.

Borchia looks over the masterpiece she has created as if she can’t believe that it is hers.

The sweet lingering scents and rainbow of pigments from milky white to scarlet red hold much history. “I didn’t know anything about these roses when I first started. I had to learn everything I could so that I would know what I was talking about when people asked questions,” Borchia says. Many of the ancient roses in her garden are painted in historical artworks including “The Madonna di Senigallia” by Piero della Francesca.

One of the most unique roses amongst the garden is one that she has not been able to find anywhere else. After coming across it years ago at a farm in Borgo Pace, 60 kilometres southwest of Pesaro, she took a root of the rose home for her garden. The dark magenta petals of the mystery flower highlight the bright yellow anther, the inner part of the rose. She does not have a name for this rose as she has never been able to find it throughout her years of researching both books and landscapes of Italy. She says that it is originally from a small village near Borgo Pace where, during the feast of Sant’ Eurosia, a Catholic saint whose feast day was celebrated on June 25, all women would walk to the top of the hill to take petals from this particular rose. “Maybe I will give the name to Sant’ Eurosia,” she says. 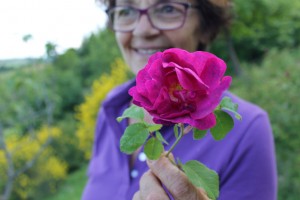 Borchia shows off one of her most unusual roses, a nameless variety that she discovered in the town of Borgo Pace and has not been able to find elsewhere.

Today Borchia is no longer on the hunt for ancient roses because she feels her garden is complete.“But if I came across a new one,” she says, “I wouldn’t think twice about taking it.”

Although the blooming season is short for these mysterious ancient roses, she has found a way to enjoy the flowers all year round. After the month of May, she uses the leftover petals to create her secret signature rose water. She boils water and sugar, adds lemon and rose petals to the pot, and lets it sit for two days. After bottling the sweet substance she simply adds sparkling water to create a tingling sensation for the taste buds.

Over the years Borchia has opened the garden up to the public, but is now keeping it private for friends and her family. She loves to share her artistic treasure, but she says it is too much work to have people visiting all the time.

Sitting at an antique white chair set, sipping on the bubbling pink water, Borchia looks over the masterpiece she has created as if she can’t believe that it is hers. “I don’t know if I will ever go to paradise” she says, “but I think I am already here.”

This article also appears in Urbino Now magazine’s Urbino Focus section. You can read all the magazine articles in print by ordering a copy from MagCloud.