In the waning heat of a June day, Giordano Galiardi glanced over his grove of 350-year-old olive trees, taking a deep breath of the grassy air that hovers over the field. He pointed, and moved slowly, making sure to be gentle with each tree as he searched for olives that may have sprouted a bit early. With the sun on his back, he picked through the branches. Sunlight sneaked over his shoulders and past his arms like spotlights, following his movements and flickering over the serious look in his eyes. 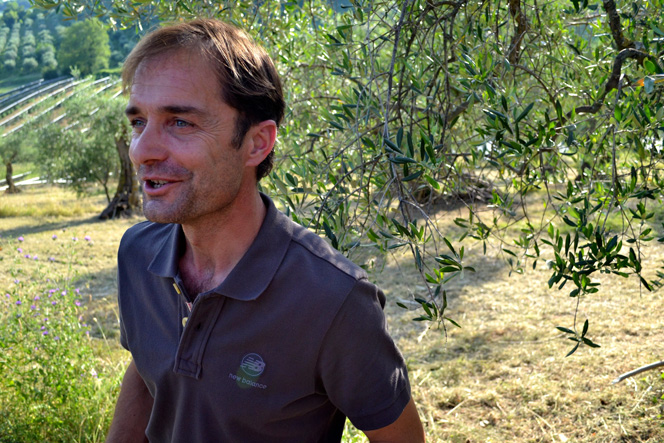 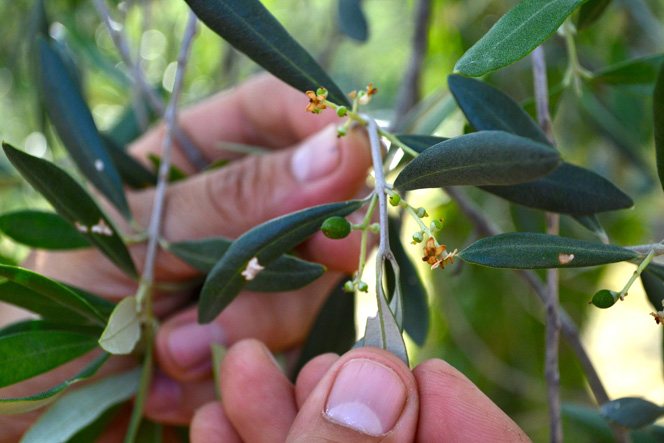 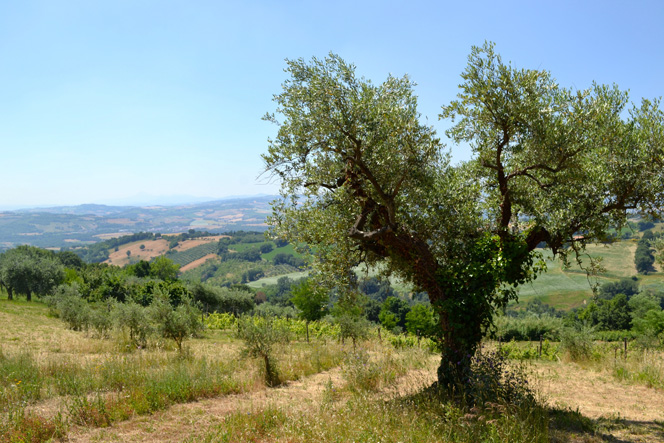 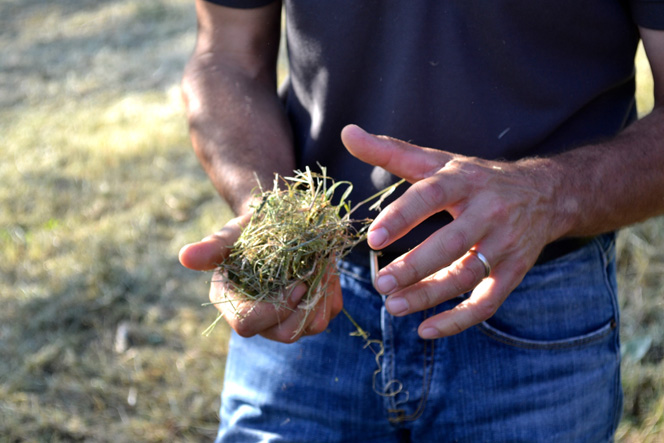 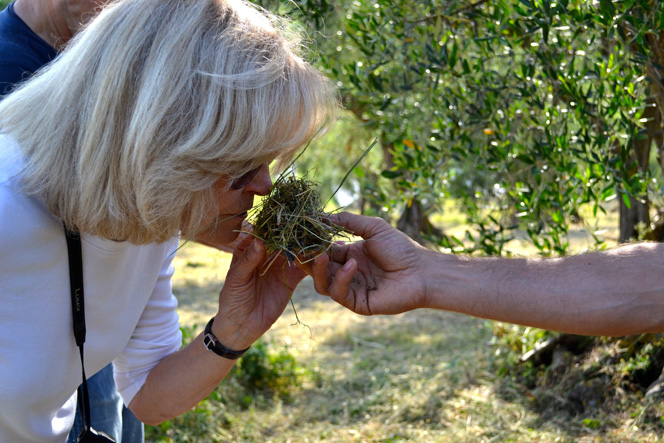 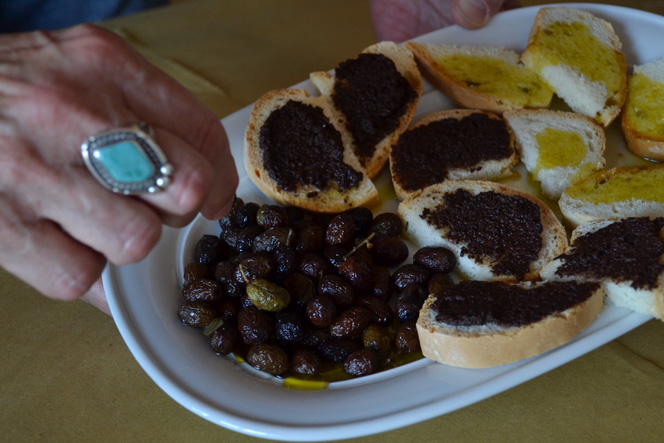 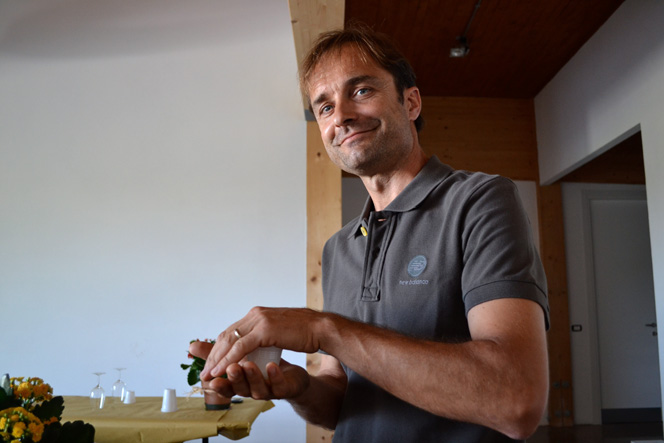 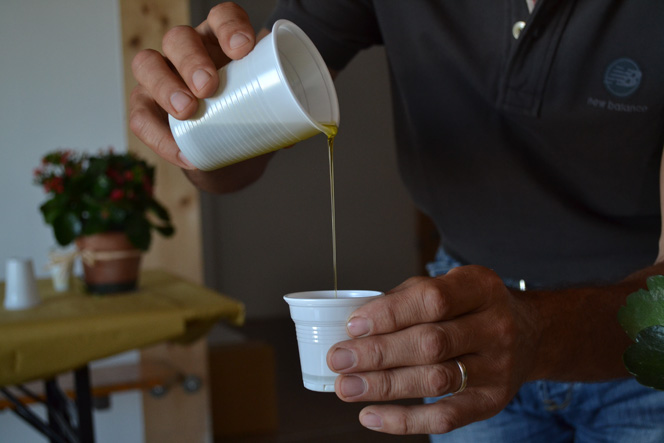 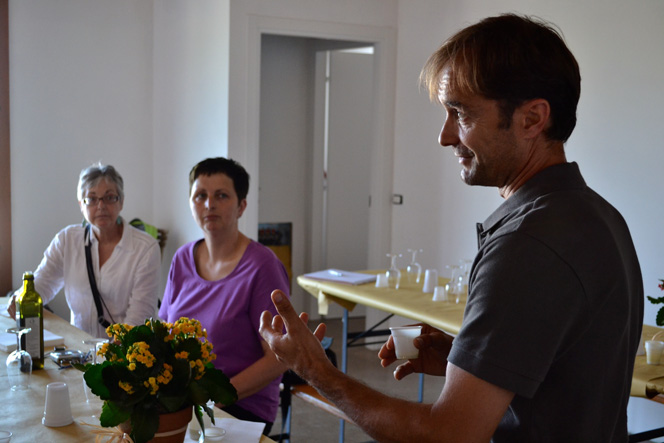 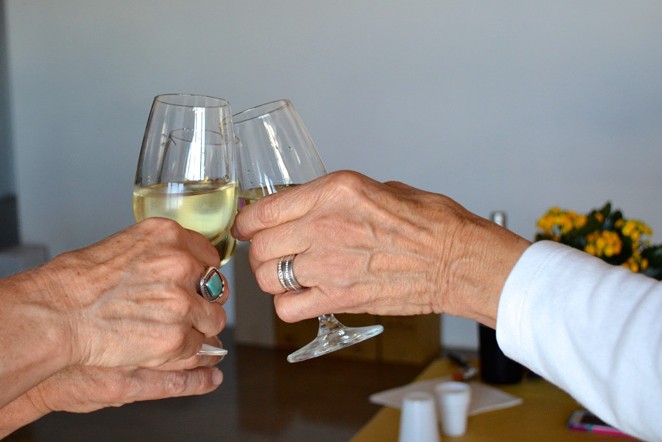 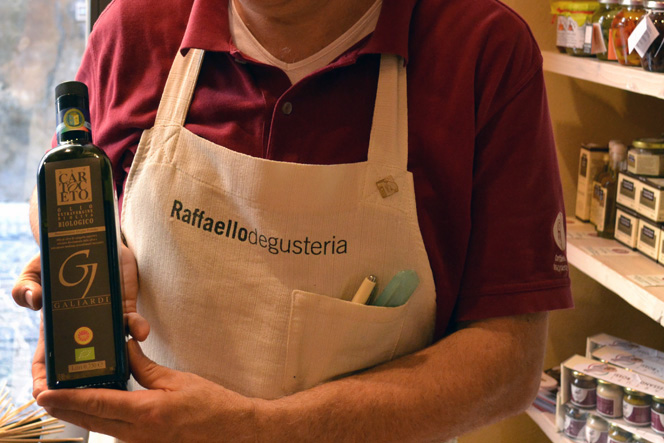 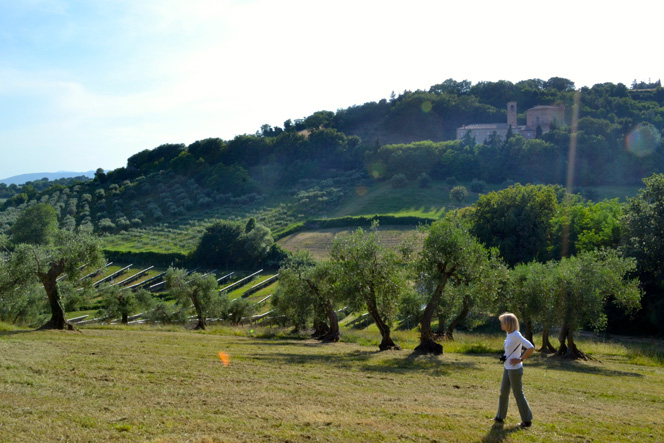 His focused expression shifted into a shy grin and he turned, opening the tree to all of the light and revealing the mallet, or cluster of baby olives dangling off a branch. The tight green buds showed that the season was approaching.

Galiardi, a farmer, producer, and environmental advocate, has built himself into an olive oil connoisseur. His passions are organic production, quality products, and the desire to leave a small environmental footprint on his land. Based in Cartoceto, a region long known for olive oil, Cantine Galiardi stresses excellence through progressive ideas. 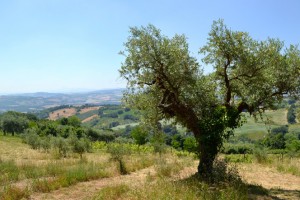 A 350-year-old olive tree, one of the oldest in Galiardi’s groves, stands amid the rolling hills of Cartoceto, a region long known for its excellent olive oil.

Located only 16 km from the Adriatic Sea, the Cartoceto area boasts the perfect climate and environment for growing olives, with its mild winters and long, dry summers. “The land plays an important part in this,” Galiardi said. “And so does the geography of the area. It’s a kind of natural arena facing the sea.” For centuries, this area was owned by Popes, who prized its olive oil.

In 2004, olive oil from the Cartoceto area earned the European Union’s Denominazione di Origine Protetta (Protected Designation of Origin), also known as having a DOP label. To maintain DOP standing, Cartoceto producers must use certain strains of olives including the four that Galiardi grows: leccino, frantoio, moraiolo, and raggiolo. The Olio DOP Cartoceto label also prohibits the use of anything other than traditional harvesting and processing methods, and ensures that the products are local and of consistent quality. “Some local varieties of olives produce some of the best oils in the world,” Galiardi said. Galiardi currently serves as secretary of the Cartoceto DOP group, which began with him and five other producers and now includes 26 olive oil makers.

“We have to be careful with all of the beautiful things of nature,” says Giordano Galiardi’s colleague Marieke Nooder.

By the time the region’s oil earned that coveted label, Galiardi had been in business for four years. Growing up in Cartoceto, he never had plans to take on the organic olive oil industry. “At the beginning of my career I was an athlete,” Galiardi explained. His passion began as a hobby with six of his friends and fellow cyclists. “At the end of the sports season I used to manage an olive crusher with my team-mates. We did that as a hobby, but my passion for oil was born out of that.”

The friends began to learn from locals and become more interested in the production of the oil. “We started working with the oil producers, and most of them were old people, so they had started abandoning their work in the fields,” said Galiardi. “We started with one field, and then it expanded.” 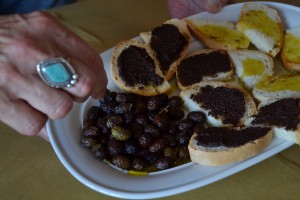 Guests reach for hors d’oeuvres – olives, bread with olive paste, and olive oil – to start off an olive oil tasting at the newly constructed Cantine Galiardi.

After breaking apart from his friends to start his own company, Galiardi, a quiet man with a strong will, made the bold choice to pursue an organic route. “From a moral standpoint, I didn’t want to use herbicides or pesticides that would upset the environment,” he noted. “I decided to go organic as a matter of personal ethics. It dates back to my childhood.”

His business began long before many stores carried, much less endorsed, organic products. Despite an unwelcoming market and skepticism from fellow producers, Galiardi stuck to his goal and achieved organic status on his farms after a three-year approval process with Suolo e Salute, a national organic inspection and certification group based in Fano.

“I’ve got a lot of respect for [Galiardi] because he is going the way that he wants to,” said Marieke Nooder, who collaborates with Galiardi and other local organic producers to build and market their businesses. “Despite what other people say to him, he continues on his way—and it is the right way for him. He believes in it and I respect that.”

While only two other Cartoceto producers are currently organic, the organic trend is growing in Italy. In February, the US Department of Agriculture’s Foreign Agricultural Service reported that Italy’s organic industry grew by 7.3 percent in 2013, and is valued at 1.7 billion euro.

“The world is asking for organic,” Nooder said. “A lot of people see that we cannot do what we have done before by destroying a lot of things. We have to be careful with all of the beautiful things of nature.”

Galiardi takes the extra step when caring for his business and nurturing his plants.

These days, Galiardi not only takes his organic standing seriously, but he also goes the extra step when caring for his business and nurturing his plants. He claims that he is “trying to take back the old traditions that our grandfathers would have used while harvesting.” This approach is called “biodynamics,” a spiritual-ethical-ecological approach to agriculture that often involves following moon phases and operating by wind directions to cultivate and harvest crops.

While olive oil makes up 60 percent of Galiardi’s business, he also produces olive paste, artichokes, wine, and some jams and creams. He grows 1,000 kilo of olives yearly, creating up to 12,000 kilos of olive oil. The products come from four local varieties of olive that are DOP approved, including Raggiolo. “Raggiolo is local and known as ‘our own olive,’” Galiardi noted. Those olives sprout from 8,000 trees ranging in age from 16 to 350 years old and rooted in over 15 hectares of land. 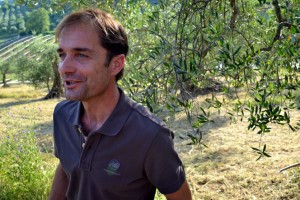 The silvery leaves of an ancient olive tree shade olive oil maker Giordano Galiardi as he shares his organic philosophy and reminisces about his evolution from cyclist to farmer.

From the field to the frantoio—oil mill—there is a specific process to make olive oil, beginning with shaking the olives from the trees during the harvesting season, between October and December. Using a touch as careful as Galiardi’s, the harvesting machines shake the trees gently. The olives are then cleaned and put into the frantoio, which presses and crushes the olives and then spins the remnants twice to separate liquid from solids and water from oil. Following organic methods, Galiardi avoids copper-based treatments and uses natural antibiotics during production.

“Experience is how I learned to produce oil first and foremost, but we also followed courses with degustatori, or taste testers, and other experts back when we were inexperienced,” Galiardi said, looking back on how he’s reached this point. “Actual experience is definitely what makes you understand and makes you better as you go.”

At the end of the process, Galiardi’s oil gives off a deep yellowish color infused with light green, as well as an aroma that he describes as grassy with a hint of fruity undertones. Visitors have the chance to experience those observations themselves in his tasting room, which is nestled in a lush hill that looks over the rolling terrain of the area—the same terrain that Galiardi used to spend his time cycling through.

“We are fascinated by the person that produces the oil,” says Alberto Crinella, whose store carries Galiardi’s products.

“I still ride in the mornings, from 5 am to 7 am. I don’t enter competitions anymore, though. This is my passion now,” Galiardi said with a confident nod towards his frantoio.

“We are fascinated by the person that produces the oil,” said Alberto Crinella, who works at Raffaello Degusteria in Urbino. This local gourmet food shop is one of 300 shops that carry Galiardi’s products internationally. “He’s a true person that really cares about his territory and the product of his territory. He is human. He really understands the meaning of selling a good product because he makes them with passion.”

Crinella continued, “The oils from Cartoceto are all good, but this one is excellent. As we say all over the world, we are what we eat. The less bad things you eat, the better you feel, or at least we think it goes like that.”

Galiardi’s land is currently being transformed into an olive oil destination, equipped with a full processing frantoio, as well as a bed and breakfast and a tasting room. Like his products, his buildings are constructed with care. His building incorporates natural cork, and the basement is made of stones from the mountains of the nearby Gargano National Park, which are stacked without using any cement. His goal is to utilize some of the ancient Roman building techniques.

“We are trying to take back the old traditions that our grandfathers would have used,” says Galiardi.

“This structure is meant to be a point of reference in central Italy concerning bio-architecture. Our goal is to make it beautiful and welcoming, based around hospitality,” Galiardi said.

His new estate will also serve as the first location of three in a project that he calls the “olive oil school.” Galiardi will bring in people of all ages to teach them about olive oil. Each student will get to harvest and crush their own olives, resulting in a small vat of homemade olive oil for them to take home. Other possible locations for the future of the olive oil school include London and Malta.

“Quality is what sets us apart,” Galiardi said, as he prepared for a group of visitors by pouring his thick yellowish-green oil onto a plate in one fluid motion. He describes his philosophy in the same simple, fluid way—driven, focused, and to the point: “Respect.”

This article also appears in Urbino Now magazine’s Mangia Bene section. You can read all the magazine articles in print by ordering a copy from MagCloud.

The editors of Urbino Now thank the folks at Living in Le Marche and Olivaverde for bringing Cantine Galiardi to our attention.