Sitting back in his chair, Matteo Grossi grasps at his dark beard and thinks back to two years ago when his family’s business began. His eyes, through a pair of lime-green-rimmed glasses, sweep over a gleaming platter of fresh salumi and cheese. Each item is carefully positioned and proudly laid out on the dark blue tablecloth covering his table at Il Cortegiano, a popular restaurant in downtown Urbino.

Matteo has asked his grandfather, Vittorio, to join him at the restaurant to reminisce. “Do you remember what your reaction was when I said I wanted us to start our business?” Matteo asks, trying to suppress a grin. 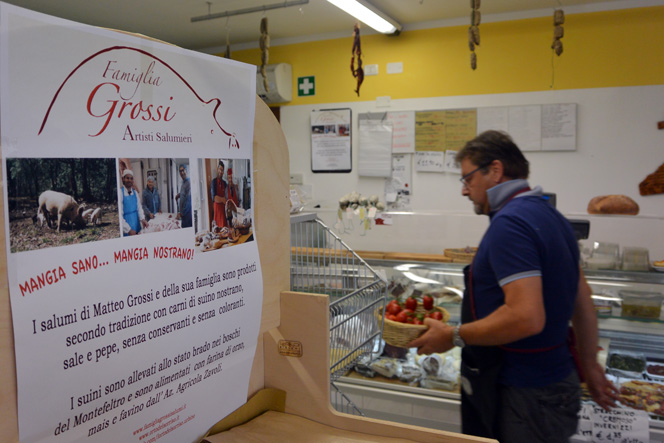 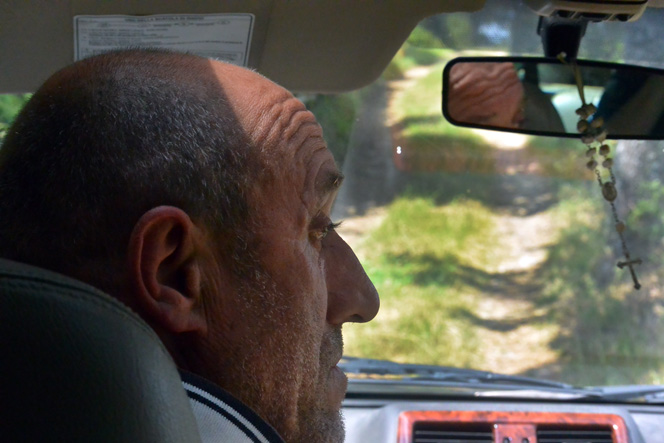 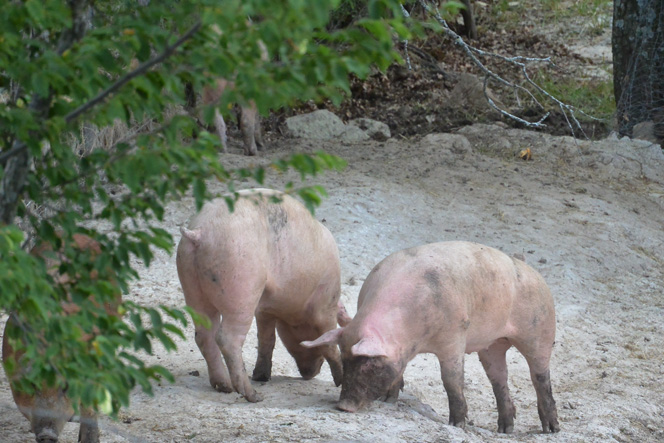 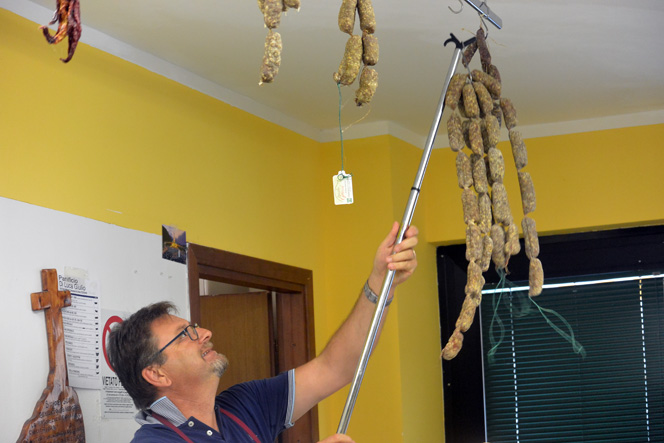 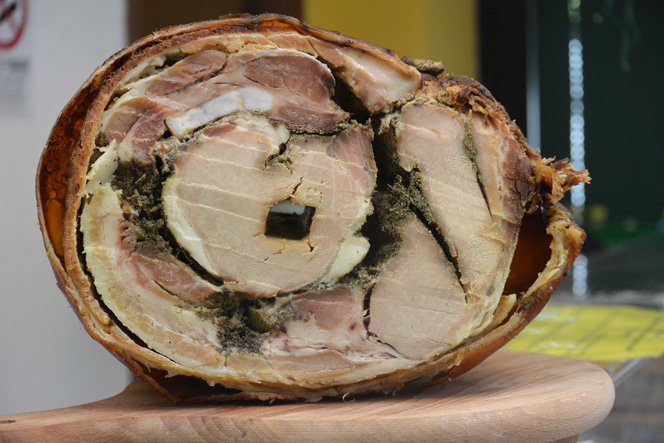 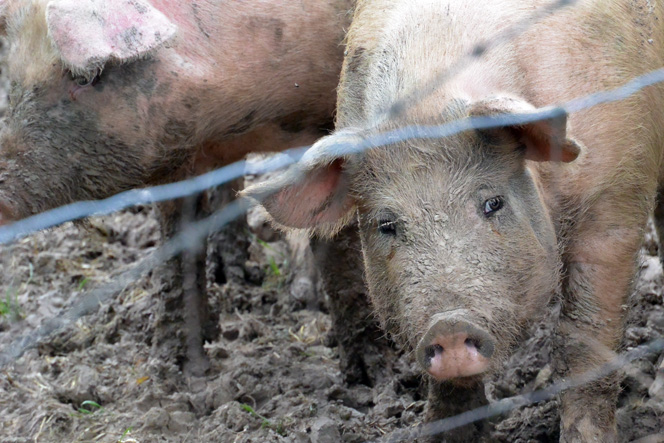 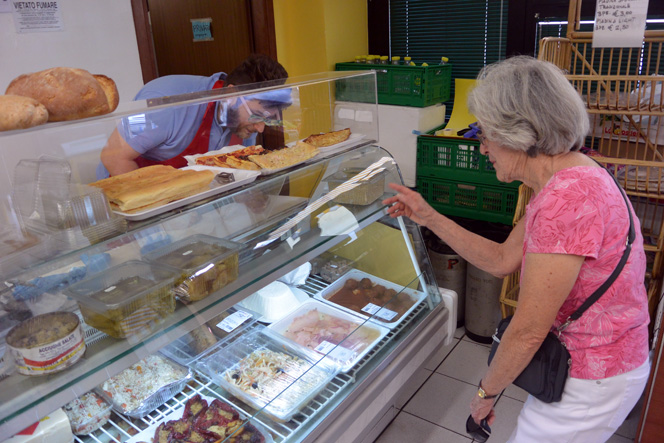 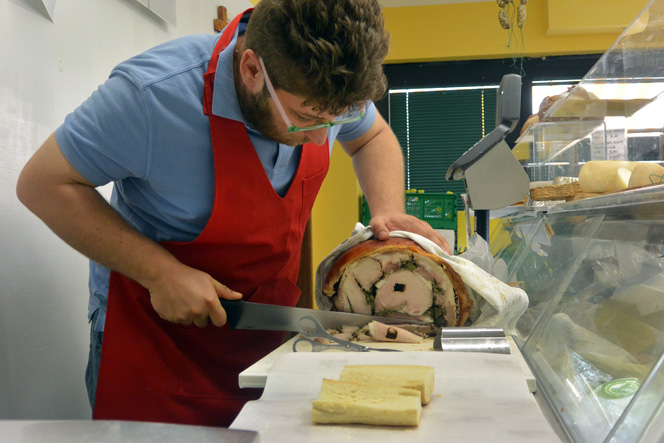 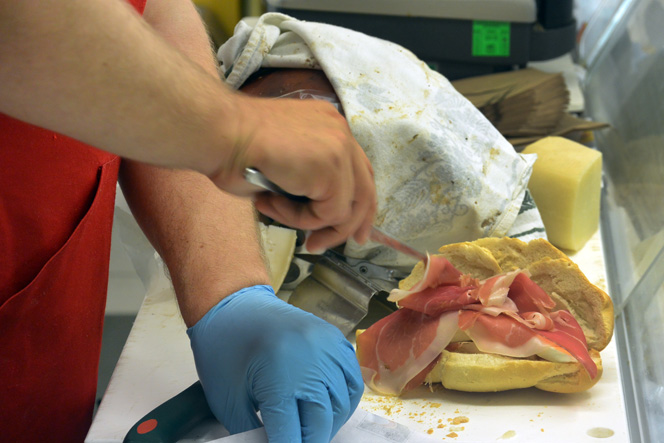 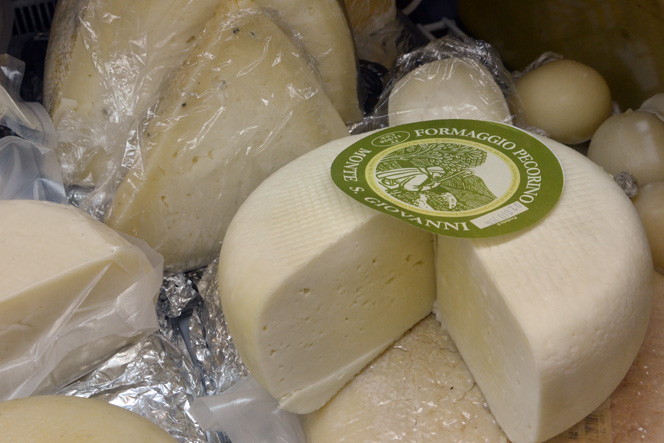 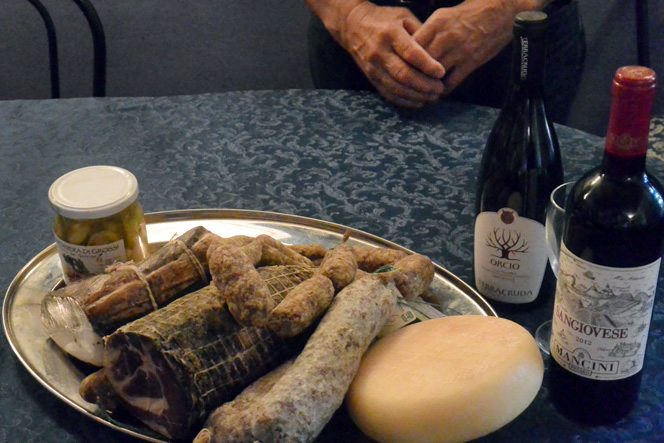 Both men burst into laughter. For a moment, the differences fade between the wise, soft-spoken grandfather and his wildly animated grandson. Though almost 50 years of age separate them, they are joined by a single cause: to produce to the finest quality of salumi in the Le Marche region.

When the laughter subsides, Vittorio cracks a delicate smile at his grandson and answers his question, repeating the words that define the artisanal style of “Famiglia Grossi Artisti Salumieri” to this day: “You’re crazy, but I’m with you. And if you’ve got the passion, you can do it.”

You’re crazy,” Vittorio Grossi told his grandson Matteo. “But I’m with you.”

To the average American, salami is a type of sausage. But to Italians, salumi refers to all sorts of cured meats, including sausages, hams, bolognas, and pork. And like other appetizing delicacies in Italy, salumi is treated with an exceptional degree of culinary care.

For Matteo, starting a business with his grandfather would also be an apprenticeship. Vittorio has been curing meat for six decades. “To be like him, it will take me all of my life,” says Matteo. “And I think it will take me at least 60 years just to learn everything.”

Vittorio came from a family of farmers in the Marche region who raised the hogs and other animals that were transformed into cured meat with the help of butchers. While Vittorio’s father and grandfather were passionate about their work as farmers, Vittorio took a special interest in the curing side of the trade.

As a boy, instead of going to the cinema, Vittorio would sit out in the barn with the butchers for entertainment. He would watch for hours as they led the hogs to slaughter, boiled their meats, and carved away the fat. And he observed as the meats were dried with salts, flavored with spices, and hung in a cool place for storage to preserve the sustenance. Thus, by the time he was five years old, he had a passion for curing meat. 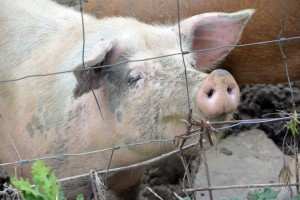 One of the hogs moves along the barbed-wire fencing at the Montefeltro farm. While the hogs are free-range livestock, the fences offer protection from wolves who might prey on them.

When Vittorio was a young teen, a neighboring butcher’s son declined to learn the craft — and Vittorio eagerly accepted an apprenticeship.

For the next 60 years, Vittorio made his living as a freelance butcher, traveling from farm to farm in search of work cutting and curing meat. At first, he strapped his tools to his back and hiked the miles between farms. His reputation grew, and soon he could afford a moped, then a car. Eventually Vittorio became known in the Le Marche region as a salumi master.

While growing up, grandson Matteo would huddle with Vittorio about twice a year in their dimly lit basement “laboratory” — as Matteo calls their home’s production space — working over a wooden table to arrange the family feast. For several years after college, Matteo served as a manager in a local furniture company, but he lost interest in the work and felt he needed “a life change.” His childhood memories of helping Vittorio got him thinking about returning to his roots to “to rediscover passion.”

“And so, when we started two years ago,” says Matteo, “I was with him to learn.”

Why don’t we cure the meat and cook the meat?” Matteo proposed.

Matteo understood the path would be challenging, and he needed to follow every direction precisely so as to not lose his way. He had to learn how to spot a healthy hog that was raised to provide the purest meat. Then came mastering the maneuvers of fat carving with the butcher’s knife. Only human hands can succeed. Industrial cutters can’t spot each hog’s unique distribution of fat. Lastly, he was taught about flavor: how the right application of salts, peppers, and other spices during the curing process would retain the seasoning — without the use of preservatives. 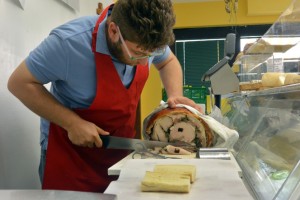 Following in his grandfather’s footsteps, Matteo made his pilgrimage around farms in Le Marche in search of the highest quality hogs for their product. At a farm along the backwoods borderline of Emilia-Romagna and Le Marche, he met a duo of farmers who allowed their hogs to live free-range lifestyles and fed them only custom-prepared organic cereals and grains. Minimal human contact plus freedom to roam, Matteo decided, was the best way to ensure a healthy hog.

“We can’t get close, because they only know the farmer,” Matteo explains one day during a visit to the farm, which has become a critical partner in the new Famiglia Grossi operation. He makes sure to stay more than 30 feet from the nearest hog. “If they saw us, it would ruin the free way they live.” Matteo says that once a hog reaches 230 to 250 kilos — between 500 and 550 pounds — they lead it on its final march before becoming the center of attention in the Grossi’s laboratory.

Back in the laboratory, Matteo always works side-by-side with his grandfather, treating each month’s new haul as another lesson. Even at 80-years-old, the master still takes his weapon firmly in his hands, both calloused from years in the salumi line of duty. With each cut from his butcher’s knife, Vittorio achieves perfection — a feat Matteo is still chasing.

After the carving, each slab of meat is cured and stored based on its unique attributes. Some meats, like salame and lonza, take only 30 to 50 days. Others, such as prosciutto, can take more than 20 months. Those long periods got Matteo thinking about a new wrinkle in his dream for the family’s business, and so he came to his grandfather with a proposal: “Why don’t we cure the meat and cook the meat?”

At first the idea seemed too drastic a break with tradition, and the master turned down the student’s idea. After all, Vittorio still had much of the craft to pass along before he felt there would be room for innovation.

“He’s trying to give me a thing I don’t have, which is patience,” Matteo says. He looks across the restaurant table to see that the humor is not lost on his grandfather.

Today, customers can find both types of products at the most visible part of the Grossi family’s modernized salumi empire, L’orto del Sorillo — or The Garden of Smiles — in “new” Urbino, just a few kilometers outside the city’s ancient walls. Vittorio’s legacy thrives in the cured meats hanging from the ceiling and in thick, tempting hunks behind the glass display of the deli counter: prosciutto, pancetta, lonza, and salame. During lunch and dinner hours, scarcely more than a few minutes go by without a new customer entering the shop. And most of them either leave with a ready-to-go cooked sandwich or their own stock of cured meat, to be eaten at their convenience.

To complement the meats, there are several choices of formaggio, or cheese. Rounding out the supporting cast throughout the shop are colorful fresh fruits and vegetables, spices, and other assorted essentials.

On most afternoons, Matteo’s bearded face can be seen beaming on the other side of the glass. Usually, he waits patiently for the customer to decide — though, sometimes, he can’t help but offer his recommendation, bursting forth like a kid telling his parents about his first day of kindergarten. Ever the modern businessman, Matteo uses his skills in English, French, and German to give foreign travelers a welcomed touch of home. 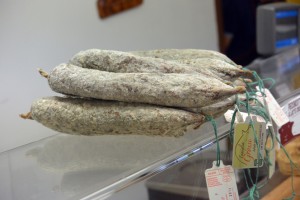 Salame, or sausages, sit atop the deli counter at the Grossi’s shop, tagged with their businesses name and logo.

L’orto del Sorillo is truly a family affair. On Matteo’s days in the shop, he usually works beside his girlfriend, Marta Campaioli. When he travels for business, his parents or grandmother run things. Behind the scenes, Vittorio and Matteo are already teaching the art of salumi to the next in the family line, Matteo’s younger brother, Tommaso.

As for Vittorio, he sticks to what he knows and rarely ventures from his side of the artisanal craft. Sitting now at the table across from his entrepreneurial grandson at Il Cortegiano, he quietly explains that his absence from the shop should not be mistaken for a lack of interest. Rather it shows trust in his partner. He says he takes no issue with Matteo spreading their family’s name, as when he convinced this very restaurant to put Grossi salumi on the menu.

Vittorio says he will always remember finding his passion in traditional salumi as a butcher’s apprentice decades ago. And he is proud to see his grandson discovering the same love — but in his own way. Vittorio notes that through the years, he never went to Matteo and asked him to join him.

A passion — a “crazy idea” — must first be discovered alone, the elder Grossi has told his grandson since they started. Then, and only then, can the master take the student’s hand and show him the way.

This article also appears in Urbino Now magazine’s Mangia Bene section. You can read all the magazine articles in print by ordering a copy from MagCloud.