URBINO, Italy – Like workers in the U.S., when residents of this famous hilltop Renaissance head home after a long day, they are eager for a satisfying meal, and a relaxing beverage.

But you won’t find any drive-through windows here. This is a place immersed in Slow Food – a growing worldwide movement and cuisine that speaks to more than just cravings by emphasizing the use of locally produced products.

“It sustains a more genuine approach to the territory, a sense of appreciation for the territory,” said Francesco Ovarelli, restaurant owner and Slow Food member.

Slow Food, in fact, was founded in Bra, Italy in 1986 by Carlo Petrini. Outraged by the opening of a McDonald’s in Rome, Petrini and other activists became motivated to remind people of the traditionally slow pace of Italian life and the pride they should take in their locally produced foods. 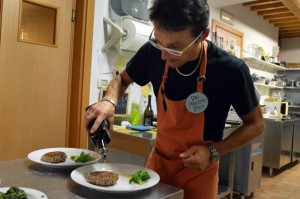 Its motto “good, clean, and fair” seems simple, but it covers plenty of important details surrounding the use of local foods:

Because the Slow Food organization considers education a key to success it hosts events such as farm tours, workshops and dinners to inform the public about healthy eating habits. And in 2001 it began an effort to educate children about the benefits of growing their own healthy foods by starting the “school gardens” programs. Of the 180 school gardens worldwide, 125 are in Italy.

Slow Food also works to promote and draw attention to local products that are close to extinction with an initiative called The Ark of Taste. In the Urbino region, for example, local chapters are striving to continue the production of “Mele rosa dei Monti Sibillini,” or rose apples. Once highly sought after, the tiny pink apples have not been able to compete with the larger apples in today’s markets and have almost disappeared from the landscape.

Another local food currently under the protection of Slow Food is “Cicerchia di Serra de’ Conti,” a grass pea specific to Le Marche. Usually gathered in bundles, this legume is typically hung in the sun to dry, then soaked in water before being cooked. It is traditionally used in soups or served as a side dish.

Saving those foods and spreading the Slow Food ethic requires the attention not only of individuals, but also restaurants.  Francesco Ovarelli, owner of La Valle Del Vento, only recently registered his restaurant with Slow Food, but he’s been a strong supporter of local vendors since he opened 12 years ago.

Ovarelli’s philosophy includes an effort to have secure all the products within “0 kilometers” from his kitchen. That means his menu has no choice but to change with the seasons.

We serve seasonal dishes and depending on the period, we change our menu, not imitating our traditional meals, but revisiting them.

“We serve seasonal dishes and depending on the period, we change our menu,” he said, “not imitating our traditional meals, but revisiting them.”

This summer, he says, they are using a lot of vegetables from local farmers such as eggplant, tomatoes, and asparagus, to name a few.  That showed up on a recent Saturday menu with  Spaghetti alla Chitarra con asparagi e noci, a pasta with asparagus and walnuts. And  Gnocchi di Patate con Crema di Melanzane, potato gnocchi with eggplant cream.

Slow Food might be Ovarelli’s guiding philosophy, but there is nothing slow about how his restaurant operates. There is constant chopping, stirring, mixing, and breezing in and out of the kitchen doors to deliver food to hungry customers. Everything is prepared fresh by hand with ingredients from local vendors such as Longhi Rovaldo (for fresh truffles and mushrooms), Grossi Family Salumieri (for cooked meats), and Verde Mela (for fresh fruits and vegetables each season). Over ten different vendors are listed in the back of the La Valle Del Vento menu, all from Urbino and the surrounding provinces.

Ovarelli says the extra care in keeping the Slow Food ethic helps his business, as well as local producers.

“We work with foreigners, mostly coming from northern Europe and Italian cities as well,” says Ovarelli.

“They are attracted by products which they can’t find ordinarily.” 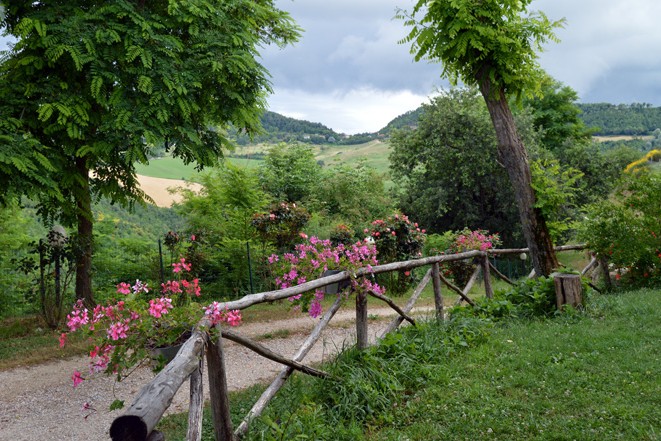 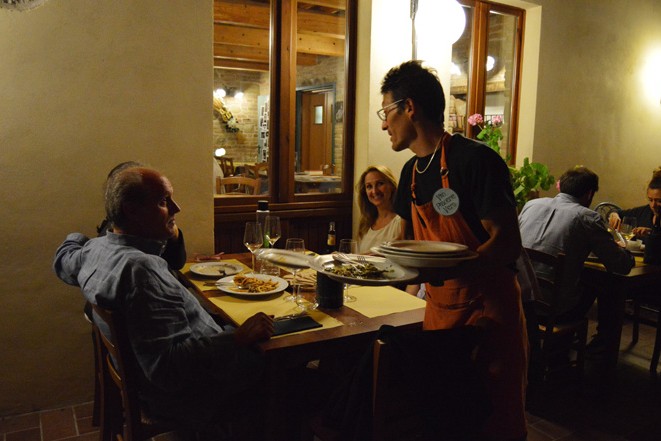 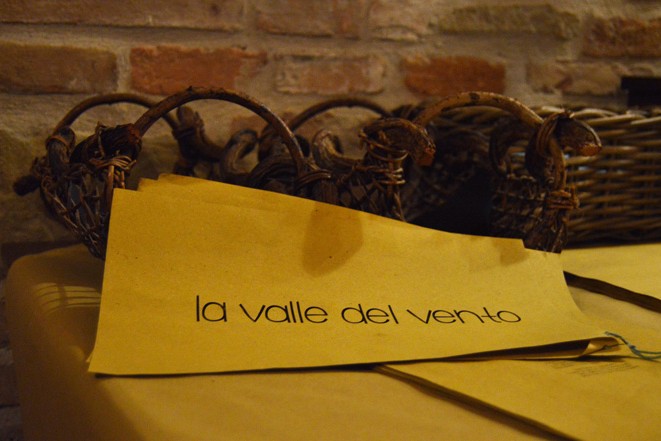 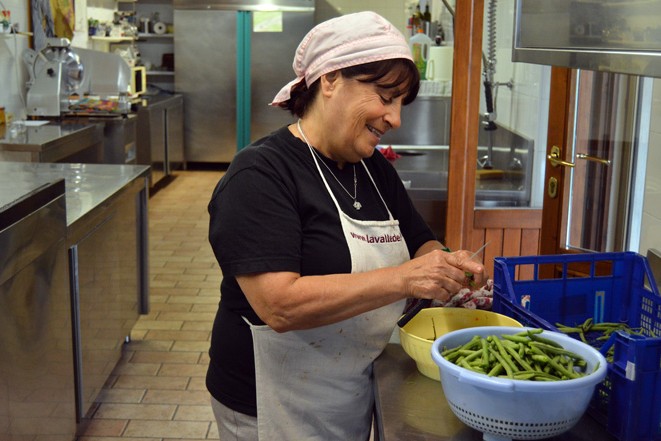 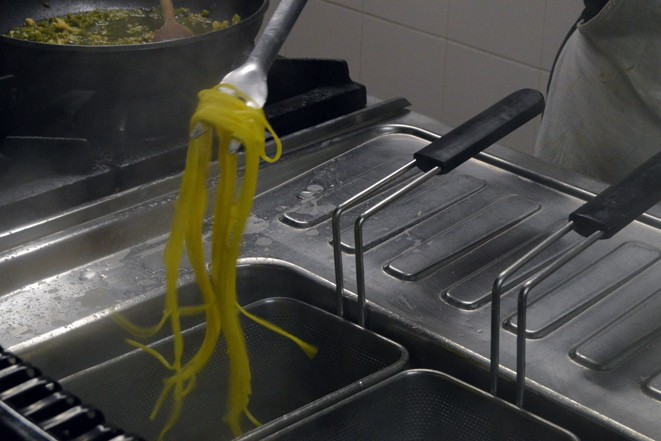 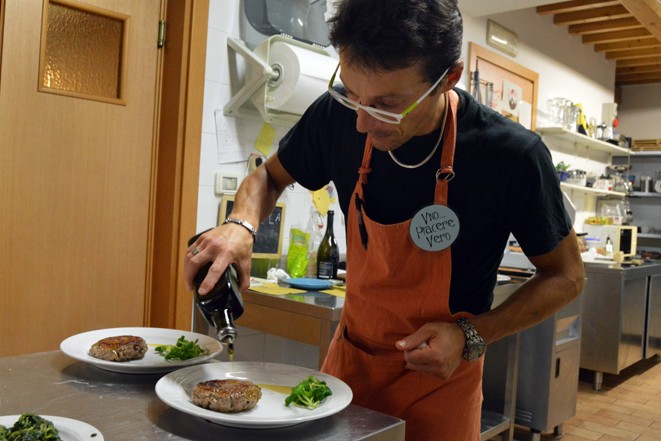 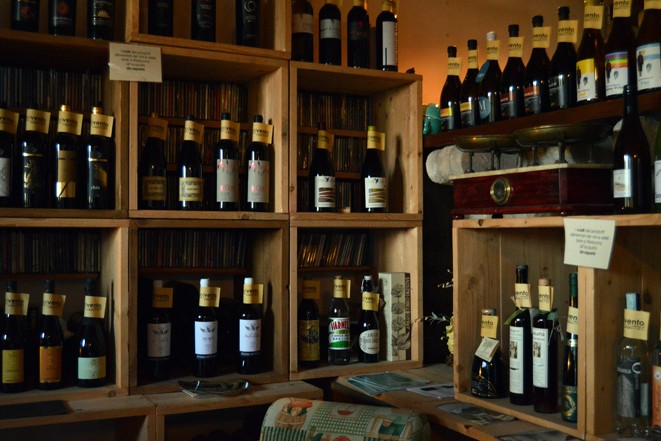 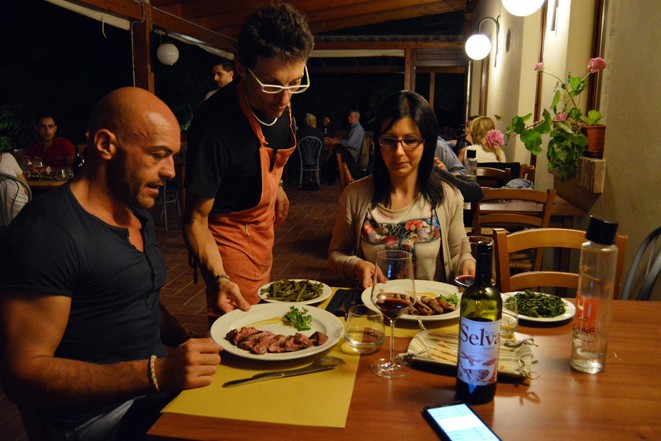 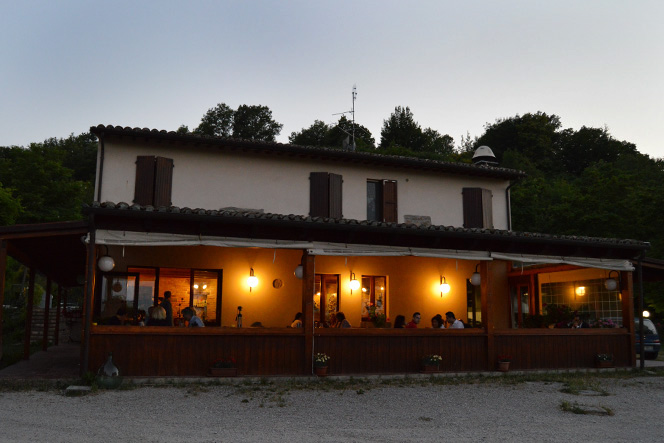